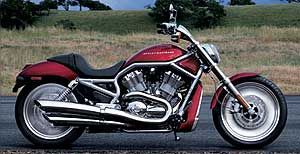 We’re at Rockville Harley Davidson in Gaithersburg, Maryland. And if you’re a Harley fan, a shop like this is the ultimate toy store, and right now the number one toy on every American biker’s list has to be the 2004 Harley Davidson V-Rod. Now a lot of bikers have been attracted to this long, low, drag bike styling, but the V-Rod is really about power. Its liquid-cooled overhead-cam engine is a first for Harley, and it’s the most powerful street bike engine that the Motor Company has ever released.

Now at this point, a lot of you are saying: How much power? Well, to find that out, we have to get out of the showroom, and into the shop We’re in the Rockville Harley Davidson service department. Most of this area is devoted to normal maintenance and repairs. But back here, this is where the magic happens. This is the dyno room. And Chris Sanders is about to put the V-Rod through its paces.

Dave:’‘Okay, how does that compare to say an air-cooled Twin-Cam?’‘

Okay, now we know what it does on the dyno, let’s see what it does on the street. The V-Rod is definitely not your Grandpa’s hog. Air-cooled Harley’s are all bottom-end power, but the 1,130cc liquid-cooled Revolution engine provides maximum pull in the upper end of the power band. Sound and feel are more Ducati than Harley. And like an Italian sport bike, the V-Rod provides serious acceleration. No other Harley gets from corner to corner so quickly. The V-Rod also demands a different cornering technique. The long wheelbase and stretched out riding position don’t give you much leverage on the bars, so you turn with your body weight like on a sport bike. It takes a little getting used to, but once you do, you can tear up the corners almost as quickly as the straightaways, and easily put just about any other cruiser on the road in its place.

The V-Rod’s a real blast to ride. Of course most beginners can’t handle its 104 horsepower, or its $17,295 price tag. For them, Harley builds the Sportster. Now the Sportster’s always been a rough-and-ready little motorcycle. The main reason being that the engine is bolted directly to the frame, metal to metal, with nothing between the rider and all that V-twin vibration. Well, for 2004, the engineers decided to change that, and built what could be the most civilized Sportster in Harley history. 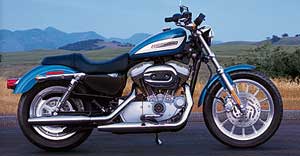 The secret to the Sportster’s new-found refinement is in the engine bay. The heavily revamped air-cooled 2-valve V-twin, still available in 883-and-1200cc displacements, rides in an all-new frame with rubber engine mounts. And to say that they work would be an understatement. Earlier Sportsters would shake your fillings out at high rpm. But the Ô04 model is an absolute pussycat. This also allows you to really enjoy the Sportster’s handling. The redesign added almost 50-pounds, but you never feel it. It’s as nimble as ever.

Add in the slickest gearbox in Harley history, the Custom model’s new big bike styling, plus pricing that starts at only $6,495, and the latest Sportster looks like a lot more than just a good starter bike.

Well, there you have it, the 2004 Harley Davidson V-Rod and Sportster. They’re both cool, both fun, and both sure to keep a lot of American motorcycle fans happy in 2004.