The S2000 roadster is just the kind of drop-top that we expect from Honda: tidy, sharp, and fast. But the high-strung nature of its engine makes it less than enjoyable to drive in ever slower, everyday traffic. So for 2004, Honda set out to make the S2000 more user-friendly, without losing any of its excitement. That sounds like a tall order. But if any company can deliver, it’s Honda.

The easy-to-use power top, with glass rear window and defroster, is unchanged. You need only to open the latches on the windshield frame and flip a switch to access bright sun and fresh air. 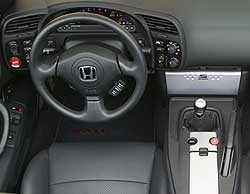 Inside the S2000 cockpit, there’s a bit more shoulder and elbow room thanks to a redesigned center console and door panels. It’s still a tight fit for tall folks, thanks to the fixed steering column. A tilt wheel is needed. The wrap-around dash remains as before with most controls literally at the driver’s fingertips. But 2004 does see the addition of XM satellite radio to the S2000’s short list of options.

All nice enough, but hardly an impressive list of improvements. But, those start when you go under the S2000’s skin. The dual-overhead-cam variable valve timing 4-cylinder engine has been stroked and now displaces 2.2-liters. Horsepower output remains at 240 but now peaks at 7,800 rpm instead of last year’s 8,300. Torque has increased from 153 pound-feet to 162 with peak production at 6,500 rpm, a full grand lower than last year.

It all makes for an S2000 that’s significantly easier to drive in everyday traffic. Adequate power is available as low as 3,000 rpm. That’s half the revs needed before. So there is less drivetrain vibration, and fewer shifts needed in the mid-range. That’s not to say that the S2000 drives like an Acura. It’s still a purist’s sports car, with a stiff ride and fairly high levels of road noise.

And it’s a bit quicker. 0 to 60 takes only 6.3 seconds, while the quarter mile runs out in 14.6 seconds at 98 miles-per-hour. While times are down only a few tenths from the original S2000, the improved punch at the bottom end makes it feel like a quantum leap. And leap it does out of the 2-miles of tight, twisty turns at Georgia’s Roebling Road Raceway, just like the proverbial scalded cat.

It may be easier to drive at low revs, but max power is still made at well over 6,000 rpm. Keep the engine spinning up high, and the S2000 surges forward every time that you press the go pedal. But note that the redline is lowered from 9,000 to 8,000 rpms to make sure all the new engine bits stay together.

Of course you can’t increase power if you don’t improve handling. The S2000’s double-wishbone suspension has been revamped with new shocks, milder springs, and a thinner rear stabilizer bar. That’s in addition to a reinforced monocoque frame, and retuned electrically-assisted rack-and-pinion steering. The upshot of which is less push on turn-in, still sharp steering response, and better grip near the limits. In fact, chassis balance is just about perfect, and body roll almost nonexistent. This is one sweet handling car! So sweet that it turned in quicker lap times than both a Mazda RX-8 and Nissan 350Z that we were testing at the track at the same time.

And what does this combination of race track speed and everyday drivability cost? Base price for the S2000 is $33,290, only a couple of hundred bucks more than last year. And that’s a lot less money than a Porsche Boxster, and a lot more fun than a Chrysler Crossfire.

Call it user-friendly excitement, a product that no other company delivers quite as well as Honda.