Back when the original Jeep was the only sport-utility-vehicle, utility was pretty much all you got. But today’s SUVs provide luxury and style that old offroaders never dreamed of. But the latest trend is to add serious performance to SUVs, and that’s where Infiniti’s new FX45 fits in. According to Infiniti, this is no stump-jumping 4x4, but a fast-moving road machine with a sport- ute attitude. Indeed SUVs have come a long, long way!

The 2004 Infiniti FX45 follows the BMW X5, and precedes the Porsche Cayenne, into the world of high performance SUVs. Vehicles that are more about acceleration and handling than mushing through snow or climbing rocks. While the need of such a vehicle is debatable, strong sales of the X5 prove that there is a desire for hot rod SUVs.

The FX45’s capabilities come from one of the finest rear-wheel drive chassis in years, Nissan’s FM structure, which is used in the 350Z and Infiniti G35. But the FX45 tops that stiff unibody with a muscular, windswept take on the classic SUV two-box design. The tall Infiniti grille, and squinty high-intensity headlights, are an instant head turner. The FX45 appears to squat close to the ground, yet still manages a decent 7.6-inches of ground clearance. There is little clearance, however, between the fenders and the manly 265/50 Eagle all-season tires on 20-inch 8-spoke alloy wheels. 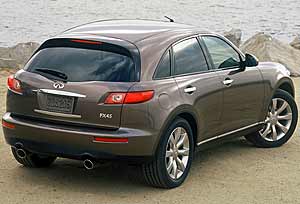 The arched roofline is also deceptive, since it appears to compromise the practicality of an SUV. Not so. Behind its lightweight hatch, the 5-passenger FX45 can house 27.4 cubic feet of cargo with the rear seats up, and 64.5 with them down. That’s almost 20% more total cargo space than the X5.

But excuse us, we digress. This is a high performance SUV after all, so the focus of most buyers will start with this 4.5-liter V-8 drawn from Infiniti’s flagship Q45. In FX45 trim output from this twin cam 32-valve Vee is 315 horsepower and 329 pound-feet of torque. Fuel economy ratings are 15 City and 19 Highway on premium gas. We managed 18 in our test loop.

The rest of the drivetrain consist of a 5-speed automatic with manual shift mode, and a sophisticated all-wheel drive system with computer controlled hydraulic clutch. With a 50/50 front to rear torque split on dry pavement, and a relatively light, for an SUV, 4299 lb curb weight, the FX45’s ability to put power-to-ground is outstanding. It bolts from 0 to 60 in 6.3 seconds. Now that’s fast for anything utility.

Traction is well managed on all surfaces, although on patchy snow and ice we found the wide tires acting more like skis than cleats. On dry or just wet roads, handling is tenacious. Steering response is spot on, body roll is well contained, and there’s gobs of grip. The all-independent, aluminum-intensive front-strut, rear multi-link suspension delivers high speed confidence as well as a compliant ride. A growing number of potholes did produce some chassis nervousness and a darty response. Yet the fast steering, with only 2.7 turns lock-to-lock, allowed corrections in a flinch. The FX45 also shows its sports car genes with four-wheel vented disc brakes, four- channel ABS, Electronic Brake Force Distribution, and Brake Assist. Throw in those fat tires and the FX45 really can stop on a dime and give change.

The posh passenger cabin of the FX45 is again more sports car than sport-ute in flavor. Note the drilled aluminum pedals. A fat three spoke steering wheel fronts a clear set of analog gauges. We found the proximity ignition key you can start the FX45 as long as it’s inside to be a nice convenience, along with intelligent cruise control. Side curtain airbags are also standard. The power, heated leather bucket seats are well bolstered, and along with the power tilt and telescoping steering wheel, give drivers of every stature a tall, commanding view of the road. Or, you can opt for the views provided by the available navigation system, which includes a rear back-up camera. A dual zone automatic climate control is standard with switchgear we’ve seen before in the new Nissan Maxima. Cassette player and in-dash 6-disc CD changer are standard, with an optional 300-watt Bose high performance stereo.

The split rear bench seat also reclines. Space seems a little tight back here, but head and leg room are on par with most mid-size SUVs. Rear A/C vents are standard, and a flip down DVD entertainment system is available.

A sport-ute that thinks it’s a sports car? Why not? It certainly makes testing trucks a lot more interesting. Indeed SUVs have come a long, long way. And, regardless of the practiality of a high performance SUV, the 2004 Infiniti FX45 has that formula just right.