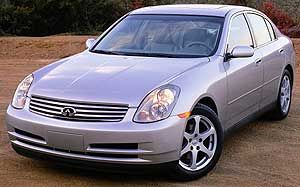 Once Nissan decided to get serious about their upscale Infiniti brand, there’s been no stopping them. One of their most impressive results has been this G35 luxury sport sedan, a rear-drive performer that can hold its own against the world’s best. Now, nearly two years after we introduced you to their four-door prodigy, we’ve had a chance to test the latest G35 and found it’s even more tenacious than before.

The added tenacity for the 2004 G35 Sport Sedan comes from the first time availability of all-wheel drive. The G35 All-Wheel Drive aims to take this low-compromise, driver-oriented sport sedan to the next level of enjoyment and beyond.

The all-wheel drive system on this G35 ‘‘x’’ is the same as used on the FX-Series luxury-utilities. Its name, Advanced Traction Engineering System for Electronic Torque Split, is almost as imposing as how it operates. Using a lightweight electromagnetic clutch, a variable amount of torque, up to 50%, can be directed to the front wheels when slipper conditions exist. 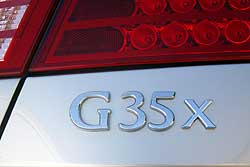 Under hard acceleration on dry payment, the torque split is 25% front and 75% rear. But, in normal driving conditions, virtually 100% of the torque goes to the rear wheels, thus retaining the G35’s exceptional rear drive handling characteristics. If you know conditions are going to be tough, like snow and ice, hit the console switch to lock torque into a 50/50 split.

While turn-ins remain lightning fast, we did detect a bit more understeer, but it is extremely predictable. The G35’s all-wheel drive system can be quite evident in corners, however, kicking in to pull the car through nicely. All G35’s are fitted with a four-wheel independent multi-link suspension with electronic stability control. All season tires ride on standard 17 inch rims, linked to a Tire Pressure Monitor system. There is some corner slide that grippier tires would cure, but stability system and a precise throttle response ensure control while keeping the fun-to-drive quotient of the G35 ‘‘x’’ very high. We’ve consistently compared the G35’s handling favorably to the BMW 3-Series, and we still do. Otherwise, this tenacious newcomer is pretty much the same G35 sedan we raved about a year ago.

Built on the same Front Mid-ship platform introduced with the Nissan 350Z, the G35 sports a stretched 112.2-inch wheelbase, and overall is nearly 10-inches longer than the BMW 3-Series and Lexus IS 300. Styling is bold. Vertically stacked head and fog lamps bracket a horizontal cross bow grille that leads quickly to a steeply raked windshield, and over a smooth cabin that clearly express the sporty yet functional attitude of the G35 All-Wheel Drive. The rear also features deeply sloped glass, an available rear spoiler, and large combination lamps with LED illumination. 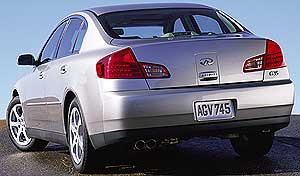 Motivating the G35x is Nissan’s familiar, but still impressive, 3.5-liter twin-cam V6, delivering 260 horsepower and 260 pound-feet of torque. Variable valve timing and drive-by-wire throttle are included. The only transmission on the G35x is a 5-speed automatic with manual shift mode. Still, it transferred power smartly. At the track our ‘‘x’‘ romped to 60 in 6.2 seconds, the same as last year’s 279-pound lighter rear-drive tester. And, finished the 1/4 mile in 14.7 seconds at 96 miles-per-hour. Our driver noted crisp shifts, but felt that there is too much spacing between second and third gear.

The sedan’s 4-wheel power-assisted vented discs with ABS, Brake Force Distribution and Brake Assist bring the G35 from 60 to 0 in a fine 124 feet. Ride quality is smooth and consistent, and though there is moderate body roll, overall the G35’s performance is impressively solid and stable.

Inside, the G35 all-wheel drive is impressively comfortable with the largest cabin in its class. It’s luxurious and quite pleasing. From the deeply hooded gauges, to the standard leather trim, to the operation of the available sunroof, designs are simple and clean. The ‘‘x’s’’ 8-way power, heated driver’s seat has a special center mound shape designed to offer enhanced support while driving. The T-shaped dash has Infiniti’s signature illumination and analog clock. On the center stack are dual-zone automatic climate controls and a standard 6-speaker CD stereo, or a 200-watt Bose system. Plus this optional treat, a DVD-based Infiniti Navigation System with a pop-up 6.5-inch screen.

In the back, passengers get an adjustable bench with trunk pass through. Leg room is decent, but the sloped rear window reduces headroom for taller passengers. Occupant safety includes dual-stage front, front side impact, and front and rear curtain airbags, plus active head restraints. And you can stow 14.8 cubic feet of gear in the ample trunk.

EPA fuel economy estimates pack in 17 miles per gallon in city driving and 26 on the highway. Expect 22 in normal driving.

And even with all-wheel drive, this G35 is still something of a bargain at its $32,445 base asking price. But don’t go overboard since options can quickly make the price sail above $40,000.

So, our ‘‘x-pert’’ opinion is that the 2004 Infiniti G35 All-Wheel Drive sedan is a smart addition to an already impressive four- and two-door luxury-sport lineup. One that delivers both tenacious grip and grins no matter what the road and weather.