It’s getting so you can’t open your car door without hitting a full-size luxury SUV. And the latest leather-lined big-boy to hit the streets is this 2004 Infiniti QX56. It’s an upscale version of Nissan’s Armada. But will this new example of posh and purpose find acceptance in a market already flooded with high end utilities?

Judging from the success of Nissan’s new Armada, it looks like the 2004 Infiniti QX 56 won’t have any trouble wrangling a few luxo-crazed sport-ute cowboys of its own! Garnering even more attention is the fact that the QX56 is not only Infiniti’s first full-size SUV, but it is also their first product made in the USA.

Designed to be both capable and accommodating, at first sight, this is no ordinary sport-ute. Its massive body wears Infiniti’s classic waterfall grille dripping in chrome. Standard Xenon headlights also redeem its brand recognition. Chrome handles, body cladding, running boards, a roof rack and power-operated flip-out rear quarter windows add style to its large form. Around back, Infiniti throws on some LED tail and brake lights for added distinction. Between the jeweled lamps rests the power-operated liftgate with separate opening rear window. 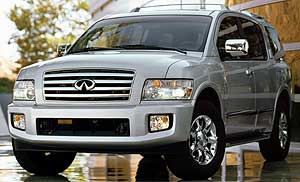 So, although a close-kin to its Nissan Armada cousin, Infiniti has gone a long way to give the QX56 a look and feel all its own, especially inside. The spacious cabin, with all its many posh amenities, is clearly Infiniti marking its territory. While the basic dash structure is the same, the execution is bolder, more modern than Armada with a better class of materials.

The gauge cluster is stylish and comprehensive. And the aluminum and wood trim nicely accent the interior. Leather upholstery doesn’t hurt either! The heated front seats are big, comfy buckets with 10-way power adjust for the driver and 8-way for the front passenger. For further comfort, power adjustable pedals with memory are standard, as is a DVD-based satellite navigation system, automatic three zone climate control, and a 10-speaker Bose CD audio system with redundant controls on the tilt/telescoping wheel.

Normally two heated captain’s chairs fill the second row along with rear climate controls and a removable center console. For 8-passenger capacity, a split bench is available. A rear DVD entertainment system is one of the few QX56 options. The easy to reach third row is a fold-flat bench. The floor is long and flat with a cargo capacity of 61.2 cubic feet with the third seat folded into the floor. Bulky cargo is a QX56 specialty. Protecting your most precious cargo is a full complement of airbags with front side impact and side curtain airbags for all three rows of seats.

As for power, the QX56 protects an interest of another sort. For the QX56 Nissan has coaxed a little extra power from their 5.6-liter twin-cam V-8. Compared to Armada, horsepower is up 10 to 315, with 390 pound feet of torque a nudge of 5, the most in its class.

All that power feeds a standard 5-speed automatic transmission with tow/haul mode for pulling heavy loads up to 8900 pounds. Power is fed to either the rear wheels or to the on-demand full-time four-wheel-drive system with low range that we like so much in the Armada. And when power is distributed down low, the QX56 can haul to 60 in only 7.4 seconds! The quarter mile passes in 15.9-seconds at 88 miles-per-hour. Bottom end power is quite strong, but the 5.6 makes excellent power at the top end as well. Shifts were more sluggish than in the Armada test, with a considerable gap between second and third. Still, these are fast times for a big SUV. 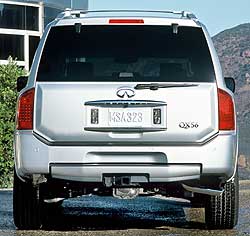 With the Armada’s double wishbone fully-independent suspension at both ends, and standard traction and stability control, the mammoth Infiniti is firmly planted and surprisingly nimble. Retuned slightly for the QX56, front end plow is still mild, and there is plenty of body roll. The QX56 reacts to the engine speed sensitive steering a hair faster than the Armada. But there was significant shake in the wheel through the slalom. Yet overall, the QX56 is easy to drive, handling like a much smaller ute.

Braking is by 4-wheel discs with ABS and brake assist. Stopping distances from 60 were a reasonable average of 132 feet. Stability is rock solid with only mild nose dive. Sitting on big 265/70 18-inch tires, the QX56 shows good grip in all weather, and delivers a refined highway ride that is less pitchy than Armada.

But full-size SUVs can often mean full-size bills at the pump. EPA fuel economy estimates are 13 city/19 highway, with our loop pulling out at 15. Not too bad for this heavyweight even at 2 bucks a gallon for the required premium.

Nor is the sticker price. The QX56 starts at $48,080 for a base rear-drive model. The base four-wheel-drive goes for $51,080-or slightly less than the less well equipped Lincoln Navigator.

So, buffed, polished and refined, Infiniti’s 2004 QX56 is easily the kin of Nissan’s Armada after an extreme make over. And like those reality shows that America can’t seem to get enough of, the QX56, with its made-in-Mississippi good looks and import class, will certainly have well-heeled domestic audiences tuning in for a closer look.