Korean importer Kia is on a roll. Even before they became part of Hyundai, U.S. sales growth was impressive, that growth being fueled by affordable, mainstream people movers like the Sedona minivan and Sorento SUV. Now, for 2004, Kia is taking a stab at the near-luxury arena with the Amanti sedan. Is Kia reaching too far too fast? Or, is the Amanti yet another Kia winner?

Hands down. Not only is the 2004 Kia Amanti marked for success, it’s Kia’s first foray into the near-luxury family sedan segment targeting popular rivals Toyota Avalon and Buick LeSabre. Firmly upstaging Kia’s previous flagship, the Optima, the Amanti shares its platform with the Hyundai XG350, adding 2-inches to its wheelbase.

The Amanti’s styling is unmistakable. With a tall egg crate grille ripped from the post-war era and headlights reminiscent of classic Jaguar, the Amanti appears almost vintage. Then things get tricky. The roof-line and rear quarters are far more contemporary. Now it seems more like a Lincoln or Chrysler circa 1980.

Even more hi-style carries over to the Amanti’s luxurious interior. With its wide European-style dash, convincing wood grain accents, and our car’s optional leather trim, it’s the most generous and upscale Korean import we’ve ever seen by a long shot. 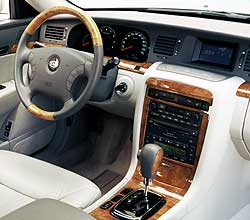 Gauges are clean and proportioned, and the tilt leather wrapped steering wheel boasts redundant audio and cruise controls. The center stack features standard Dual-zone climate control and CD/cassette audio. Our car with the Leather Package upgrades adds a 270-watt Infinity sound system with an in-dash CD-changer and a trip computer with 4-inch LCD screen. Opt for the Comfort package and add sunroof and heated seats.

Rear seat room splits the difference between the larger LeSabre and smaller Avalon, but does lead in head room. The bench seat fits three adults well, and features a small pass-through to the trunk. The trunk itself delivers an adequate 15.5 cubic-feet, but is smaller than its rivals. The Amanti’s trunk lid, however, is supported by gas struts that leaves all the space for cargo.

At the other end, the Amanti’s powertrain is the corporate 3.5 liter twin-cam, 24-valve V6 that also powers the XG350. It delivers 200 horsepower and 220 pound-feet of torque. That’s five horses less than the LeSabre and 10 shy of the Avalon. Fitted to a front drive 5-speed automatic transmission with manual mode, the 2-ton Amanti managed only average track numbers. Our best 0 to 60 time pulled 8.4 seconds. Our car’s traction control prevented any dramatics. Our quickest quarter mile was 16.5 seconds, at 85 miles-per-hour. Throttle response at launch was sluggish with power building slowly in the low end and throughout the rev band. The gearbox seemed to shift regardless of driver input and there was no real benefit to manual mode shifts.

The suspension is pretty much straight off the XG350, fully-independent with double wishbone front and a multi-link rear. Handling can best be described as safe but slow. Response to steering inputs is a bit sluggish. Once turned, the Amanti produces noticeable understeer, body roll and tire scrub. The speed-sensitive rack and pinion steering is light but lethargic, providing virtually no feel. As speeds rise, the soft experience prompted our drivers to ease off through the high speed lane change. Yet, with optional electronic stability control, the Amanti remained firmly planted. The suspension provides so much warning that it would be hard to get into trouble with this car.

Braking, however, proved class-worthy. Our Amanti’s 4-wheel discs and standard ABS with Electronic Brake Force Distribution stopped from 60 in an acceptable average of 134 feet. Pedal feel was a bit spongy but stops were straight, smooth and predictable.

But, like most in its class, what the Amanti is really tuned for is smooth boulevard cruising. Its quiet ride and soft presence on the road proves it’s a worthy competitor among rivals. We know more than one Lincoln Town Car owner that wanted to know much more about the Amanti. Actually fuel economy is closer to the V-8 Town Car than to its main V-6 rivals. EPA fuel economy is 17 city/25 highway. In a mixed driving loop expect 22. Both the LeSabre and the Avalon are rated at 20 city/29 highway.

As for the numbers on the window sticker, the Amanti collects $25,535 for a base model. That’s comparable to the LeSabre, and about a grand less than an Avalon. And both have fewer standard features than Amanti.

With its unique, somewhat classic, but still good-taste looks, and high content, the Amanti is an impressive first foray into premium sedans for Kia. It certainly is a more luxurious car than consumers expect from a Korean brand. Plus it has a 100,000 mile powertrain warranty that dwarfs the competition. So while the 2004 Kia Amanti may not seriously challenge the leaders in its near-luxury family sedan class, they’d certainly better take notice.