When you’re a segment leader, like the Lexus RX300 is among car-based luxury utilities, you’re always looking over your shoulder. You know there’s another new competitor looming in the rearview mirror. So for 2004, Lexus has upped the ante with an all-new RX330. And as its name implies, it offers more of everything that made the original RX so popular. But is it enough to stay out in front?

Lexus certainly thinks so. That’s because the designers and engineers at Lexus have packed the all-new 2004 RX 330 with every luxury and performance feature that you can possibly fit in a mid-size sport-ute chassis, and then some. A chassis which is significantly stronger, and rides on a significantly longer 106.9-inch wheelbase. It supports a body that is not only 6.1-inches longer, but has been stylistically and aerodynamically refined, especially in the nose, which features optional Adaptive Headlights. These computer-controlled High-Intensity Discharge lights swivel right or left according to speed and steering angle, letting the driver see into the turn. While a feature fancied by Citroen, Tucker and others, this is the first modern application of swivel lights. Like the LS 430 sedan, the front end can also boast a laser range finder for the optional Adaptive Cruise Control. It automatically maintains a safe distance from the car in front.

On the profile, the new RX 330 is also sleeker, without the stretched-out appearance of many competitors since Lexus did not add a third row seat. But they did add more than a hint of sporty flair with pronounced wheel wells filled with standard 17-inch and optional 18-inch tires, along with a tasteful hatch top rear spoiler. Overall, rear styling is also smoother, and the RX 330 can now be equipped with an optional power liftgate. That combined with the optional air suspension’s kneeling ‘‘Access Mode’’ makes loading easier. So you can make good use of the 38.3 cubic feet of cargo space, which grows to 84.7 cubic feet with the seats folded. There is also handy under-the-floor storage, and an auto-retracting cargo cover.

More features mean more weight, however , 141 pounds more. And to haul it all around, the RX330 gets a larger 3.3-liter dual-overhead-cam V6 engine. Output is 230 horsepower, up 10, and 242 pound-feet of torque, a boost of 20. The new six uses an electronic drive-by-wire throttle and variable valve timing, and carries an Ultra Low Emissions Vehicle rating. The RX transmission is an also new 5-speed electronic automatic. A Multi-Mode version with sequential manual shift is packaged with the Air Suspension. And in a first for the luxury sport-ute class, Lexus will offer a fuel-sipping gasoline- electric hybrid RX within the next two years. 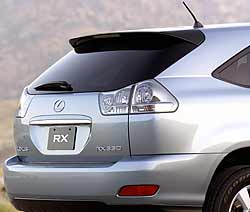 The here-and-now RX suspension uses four-corner struts that Lexus says are designed for optimal on-road handling. And it handled the winding roads east of San Diego, California, where we first put the RX 330 through its paces, very well. As expected, the RX 330 delivered a refined, car-like experience. The drivetrain didn’t feel any stronger than last year, no doubt due to the extra weight, but was both smoother and quieter. Handling was also more than satisfactory, with good grip, solid steering feedback, and moderate levels of both understeer and body roll.

If foul weather grip is a priority, this year’s all-wheel-drive system is equipped with a more efficient center differential. For normal driving conditions, torque continues to be split 50/50 front to rear. But last year’s viscous coupling is gone. For 2003 the VSC skid control system is utilized to redirect torque to the wheels with grip, both front to back, and side to side. VSC is standard on all RX 330s, front and all-wheel-drive. While the standard 7.5-inches of ground clearance will be sufficient for most owners, the RX 330 is not intended for off-road use. The optional air suspension adds 1.2-inches more clearance for low speed rough road travel.

The interior of the RX 330 is expectedly luxurious. Wood accents are tasteful and the quality of leather upholstery on our vehicle was first rate. The extremely well-equipped 5- passenger interior also carries a long list of new features, the most interesting of which is a back- up camera integrated into the optional DVD-based navigation system. There are also brighter electro-luminescent gauges, an available power tilt-and- telescoping steering column, and dual-zone automatic climate controls with dust filter. A dual media eight-speaker cassette/CD-stereo is standard. Audio options include an ear splitting 240- watt Mark Levinson system with 11 speakers. We found the sliding center storage console to be a nice touch, too.

For safety, the RX 330 is equipped with larger side-impact airbags, front and rear side- curtain airbags, and a driver’s side knee airbag. The sliding-reclining rear seat is a 40/20/40 split design for greater cargo and passenger versatility. And, for the kids in the back, there is an optional DVD entertainment system.

Reflecting the crowded realities of the SUV market, Lexus says that despite so many new features, RX pricing will change little. When it arrives in April, the RX 330 will carry a base price of approximately $35,000 for the front-wheel-drive model, and under $38,000 for all- wheel-drive. That should make affluent sport-ute fans, especially those already sold on Lexus luxury, very happy.

The 2004 Lexus RX 330 is the first Lexus to be made in North America and it truly does offer more of everything that prompted Americans to make the original RX so popular, which should be more than enough to keep this segment leading luxury-utility way out in front.