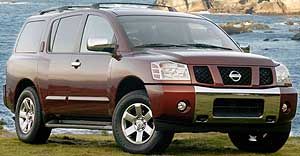 Just when you think they couldn’t get any more crowded, another family size SUV lands on dealer lots. This time it’s Nissan dealers that are feeling the squeeze with their first full size sport-ute, the Pathfinder Armada. Based on Nissan’s new, big Titan pickup, the Armada actually arrives first, ready to give Tahoes and Expeditions a real run for their money.

To even be considered a serious competitor to the most familiar full-size sport-utility vehicles, the 2004 Nissan Pathfinder Armada must be tough, powerful, versatile, and something more.

When it comes to power, Armada easily holds its own, thanks to the Titan’s impressive 5.6-liter dual-overhead-cam all-aluminum V-8. Its 385 pound-feet of torque trumps Tahoe and Expedition for sheer grunt. Horsepower is an equally healthy 305.

Power feeds through a 5-speed automatic transmission, the only one in its class, with tow/haul mode for pulling big loads, and then either to the rear wheels or, like others in its class, to on-demand full-time four-wheel-drive. Armada uses control technology derived from Nissan’s sophisticated Skyline GT-R sports car. It utilizes a 2-speed transfer case. And there is 4-Lo gearing plus 10.7 inches of ground clearance for tough terrain and conditions. And when power goes to ground, it really pulls. Up to 9100 pounds of trailer, or to 60 in only 7-seconds flat! The quarter mile rocks by in 15.5-seconds at 82 miles-per-hour. Power builds fast and smooth. The bottom end push is quite strong, but the 5.6 makes excellent power in the top end as well. Though rougher than competitors, shifts are firm and sharp.

As is the suspension. Double wishbones at both ends with an independent rear make the big Armada surprisingly light on its feet. But its long wheelbase means a wider turning diameter than Tahoe and Expedition. Front end plow is mild, though there is a fair bit of body roll. The engine speed sensitive steering is also a touch slow, but provides good feedback.

Braking is by 4-wheel discs with ABS and brake assist. 137 feet was our slightly long average stopping distance from 60. Side to side stability is rock solid despite lots of nose dive. Full-size SUVs can be a little expensive as daily drivers. EPA fuel economy estimates are 13 city/19 highway, with our economy loop result of 15. All slightly better than competitors.

Daily driving is, however, what the Armada’s interior was designed for. It’s full-size spacious, with all the amenities. The look is bold, if a little dated, with the Titan-derived industrial-size dash presenting most controls in a massive center stack and gauges in a stylish, comprehensive cluster. Also like Titan, and most recent Nissans, some dash plastics look a bit cheap. But the front seats are big, comfy, well-upholstered buckets, with 8-way power adjustment for the driver and power adjustable pedals on all models. Armada safety is on the mark with standard side curtain airbags for all three rows of seats, a feature optional or not available on competitors.

Second-row seat choices are a 3-section split folding bench in 8-passenger Armadas, or fold-flat captain’s chairs with a removable center console in 7-passenger editions. Our folding bench worked crudely with operations poorly marked and not intuitive. But once flipped and folded, provided easy access to the standard third seat. Leg and head room are true adult size.

Behind the third row is 20-cubic feet of cargo space. Fold it flat into the floor, and space grows to 56.7. With both rows folded, total space is 97.1 cubic-feet. While a smaller cargo space than rivals, Armada’s versatility is tops with a folding front passenger seat that allows items a full 10 feet long.

So from where we sit, while it has some rough edges, the 2004 Nissan Pathfinder Armada is a credit to its designers, and to the people in Mississippi who make it. It also is much more of a serious competitor to domestic-utes than Toyota’s Sequoia. And while it will likely never win the big-ute sales race, we’re certain the 2004 Nissan Pathfinder Armada will finish well in the money.