Minivans: you either love them or you hate them. They look too boxy to be cool, yet can carry more family and bulk than full-size SUVs. No wonder over a million minivans are sold each year. But isn’t it time for a car company to think outside of the box and reinvent the minivan? Well, one company, Nissan, is trying just that with an all-new Quest. So let’s see if the 2004 Quest really rhymes with minivan success.

The first hint that Nissan might have a radical minivan in the works was at the 2002 auto show in Detroit when they revealed a swoopy, inventive Quest concept. With styling that was oh- so French, and clever touches like a folding rear lift gate, it looked like a real re-invention of the Minivan was coming.

Fast forward to the all-new production 2004 Quest, and although the Renault-inspired styling has been toned down, the all-new Quest still screams innovation. And how fitting that this suburban America kiddie-carrier is the first vehicle produced out of Nissan’s brand new assembly plant in Canton, Mississippi. Trim grades for the Quest are 3.5 S, 3.5 SL, and 3.5 SE. 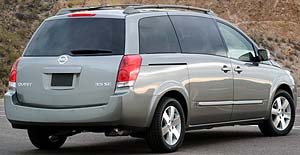 In a clear effort to dodge the minivan-esque image, Nissan went for a more athletic look, with a bold front end and arched belt line. The wheelbase has been expanded to 124 inches, giving the Quest the widest sliding side doors and easiest rear seat access in its class

A quick peek inside the cabin and you’ll feel like visiting the nearest Au Bon Pain caf,. A platter-shaped control surface sits low against the dash and houses the shifter, climate, and stereo controls. The focal point of the dash itself is a center-mounted instrument cluster with a 6.3 inch information display screen. It may look artistic, but we aren’t fond of having the speedometer anywhere except right in front of the driver, and some of the warning lights were almost unreadable. But we did find the note clip behind the standard tilt steering wheel a nice touch. 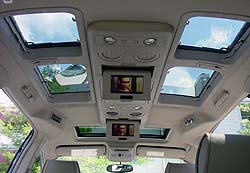 Protecting outboard occupants of all three rows are standard head-curtain airbags. Front- seat side-impact bags are also available. And the Quest really does outshine most SUV’s when it comes to carriage. While the folding hatch didn’t make it to production, the cavernous cargo hold did. With the second and third row seats folded flat into the floor, there’s nearly 150 cubic feet of space.

But don’t let its domestic abilities fool you. The Quest is built on the same FF-L platform as the Murano and Maxima. The Quest has also been aptly fitted with a 3.5 liter Dual Over-Head Cam, 24-Valve, V6 engine. And spitting out 240 horsepower and 242 pound feet of torque, it’s proven it can handle the load.

On the track it launched to 60 in 8.9 seconds, taking the quarter mile in 16.9 seconds at 84 MPH. Fine numbers for a van. The SE uses a smooth shifting front drive 5-speed automatic while other grades make do with 4 speeds. With the 5-speed, EPA fuel economy estimates are a minivan typical 18 city and 25 highway.

The Quest’s 4-wheel vented disc brakes with ABS, Brake Assist and Electronic Brake force Distribution averaged a stopping distance from 60 to 0 of a reasonable 136 feet. Fade was minimal and stability good. In handling tests, our drivers noted moderate body roll, and were a bit concerned about the VDC stabilization system’s aggressive input during hard cornering.

On the road, however, the Quest feels right at home. Its four-wheel independent suspension with an advanced multi-link design at the rear attributes to its comfortable and controlled ride.

So while it’s obvious that the new Nissan Quest is vastly superior to the original, and very competitive with its rivals, is it really the minivan reinvented? Well, yes! Nissan proves that to handle people and cargo like a box, you don’t have to look like one. So, on that point, and most others, it looks like this Quest for success succeeds.