The full-size pickup segment has long been ruled by Detroit automakers. But as big pickups became more and more popular and profitable, imports brands couldn’t resist the temptation to cash in. The first was Toyota with the T100 and Tundra. And now Nissan is taking the plunge with the all new Titan. But after decades of American dominance, is the Titan strong enough to haul away a slice of the full-size pickup pie?

It better be, because Nissan has invested a huge amount of money and engineering talent in making the 2004 Titan the equal of its domestic competitors. Like the big guns from Ford, Chevy, GMC and Dodge, the Titan is built here, in a new Canton, Mississippi assembly plant, and built tough. All XE, SE, and LE models ride on a stout, fully-boxed, ladder frame. The frame is supported by a double wishbone front and dual-rate leaf spring rear suspension and a choice of 17-or-18-inch wheels.

Titan’s 139.8-inch wheelbase is true full-size, and nearly a foot longer than the Toyota Tundra, and it accommodates either a Crew Cab with four full-size doors and a 5-foot-6-inch bed, or a King Cab, with 6-foot-6-inch bed, and twin rear access panels. The panels open 168-degrees, almost twice as wide as the competition, to ease loading at the rear seats. There is no Titan regular cab. Both bed lengths offer a number of innovations, including the industry’s first factory-applied spray-on bed liner and Nissan’s Utili-Track bed channel system. It consists of five C-channel rails, and a set of movable utility cleats, that give an almost unlimited selection of tie-down points. A great idea as long as you don’t frequently carry gravel, mulch, or anything else that can get stuck in the channels There’s also a lockable, left bed-side storage compartment, 12-volt power point, and cargo lights on both the cab and tailgate. Payload capacity is a maximum 1,643 pounds for the Crew Cab, 1,692 pounds for the King Cab.

The power to move all that cargo comes from Nissan’s new 5.6-liter all-aluminum Endurance V8. Its 305 horsepower and 379 pound-feet of torque comes courtesy of 32-valves, and chain-driven dual-overhead-cams. The only transmission choice is a new 5-speed automatic, with a tow/haul mode for heavy work. And work it does, with a 0 t0 60 run of 7.2 seconds, and a maximum towing capacity of over 9,500 pounds.

We spent a lot of time in a Crew Cab model both at the Titan’s California press launch, and at our home base in Maryland. Time that showed us a pickup that, like its Big 3 competition, to be much more refined and sophisticated than pickups of just a few years ago. The Titan feels, well, tight! The ride is solid, truck-like, but not jarring. Handling, however, is spongy and not as crisp as the new Ford F-150, yet not bad for a machine that tips the scales at over 5,000 pounds. Nissan’s big V8 makes strong power throughout the rev band, but with a smoothness suitable for the Pathfinder Armada SUV, which it also powers. 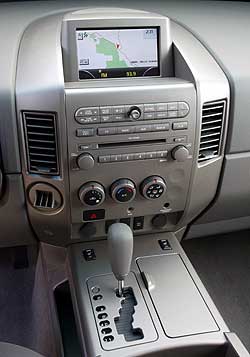 But the Titan isn’t only about tough. The cabin is spacious and modern, looking more like a nice sedan than a place to park your muddy boots. Materials seem sturdy, if not terribly expensive. Yet, Titan offers most of the amenities we now expect in a luxury SUV, including leather, a navigation system, power adjustable pedals, a console mounted gear shift, and a DVD entertainment system. Both bench and bucket seats are available up front. And in the Crew Cab, a passenger-side bucket that folds flat.

In the rear, the Crew Cab offers real room for tall adults. While in the King Cab, the very upright rear seat cushions split and fold for extra cargo space.

Pricing for the Titan has not yet been set, but when sales start in December, expect the King Cab’s base price to hover around $25,000. The Crew Cab should be priced from about $30,000, putting Titan pricing in line with that of market leader the Ford F-150.

Just matching the latest domestic full-size trucks like the all new 2004 F-150, or the robust Dodge Ram, is a tall order for any new pickup. But the 2004 Nissan Titan looks like it’s sharp enough, tough enough, and big enough, to carve out a meaningful slice of the full-size pickup truck segment, and then some.