For years, Pontiac has touted itself as the excitement division of General Motors. And ever since the days of screaming eagles on the hoods of Trans Ams, it has also been known for some pretty over the top styling. But with GM now gambling on a complete overhaul of its mid- size sedan lineup, Pontiac’s Grand Prix must deliver both excitement and sophistication. So can the 2004 Grand Prix rise to the occasion?

Well, judging from the two days we spent driving the 2004 Pontiac Grand Prix through the heart of the great Southwest, we’d say that they’ve dealt a great hand. Gone are the tacked-on body cladding and huge boy racer rear wings. Looking nearly identical to the G-force show car, the ‘04 Grand Prix is largely all-new and very sophisticated. Clumsy cladding is replaced by clean well-integrated styling that accents the sharp, coupe like profile of Grand Prix’s two basic models, the GT and GTP.

Capitalizing on the Pontiac division’s ‘‘wide track’’ theme, the ‘04 Grand Prix looks even more hunkered down than before. This is especially true of our test vehicle, a top drawer GTP model with its larger 17-inch wheels. But both models have sporty styling touches like dual exhaust and subtle rear spoiler. Riding on the same 110.5 inch wheelbase as the previous Grand Prix, the ‘04 is just slightly longer and narrower. This adds to the sleek impression one gets from the clean, understated styling.

While most of the Grand Prix’s cards were dealt by the time car-czar Bob Lutz arrived on the General Motors scene, some credit must go his way for seeing that the Pontiac styling department stayed true to its ‘‘less is more’’ theme. The lion’s share of engineering development went under the skin. The heavily revised ‘‘W’’ chassis is strong and rigid providing an excellent basis for performance. Our GTP test car came with the competition group or ‘‘Comp G’‘ suspension package. This up level suspension provides stiffer bushings and specific spring rates and dampers tuned for maximum grip and feel. When combined with the 17 inch V-rated Goodrich Comp T/A tires, Pontiac claims a package capable of .83G of lateral acceleration force on the skid pad. That’s impressive for what is after all not a sports car, but in reality a sporty family sedan.

The base Grand Prix GT is powered by GM’s venerable 200-horsepower 3.8 liter V-6. Our GTP goes beyond that with a 260 horsepower 3.8 with an Eaton supercharger. This engine’s 280 pound-feet of torque, when combined with a performance geared final drive ratio, makes for very strong acceleration. 0 to 60 in 6.5 seconds, or about two seconds faster than the base car. Our Grand Prix GTP also came with the touch activated power ‘‘Tapshift’ system. Mounted to the steering wheel F1 style, it allows manual control of the four speed automatic transmission. Shift response is quick and clean. And to our pleasant surprise, unlike many such systems, Tapshift will not automatically shift up or down except to first gear when stopping.

In two days of desert and mountain driving our Grand Prix GTP exhibited great poise and balance. The overall feel is very solid, with a firm, but never harsh, ride and damping. Going in we were skeptical at how the not always well regarded W-chassis would handle the sophisticated Comp G suspension package. So we were pleased to find that this combination results in one of the best handling and most responsive mid-size sedans on the market today. The enhancement of the ‘‘W’’ platform, which will also be the basis for a revised Buick Century, shows how smart chassis development can return a silk purse.

But the higher level of sophistication doesn’t just reside on the outside of the Grand Prix. All Grand Prixs benefit from a completely reworked interior that provides impressive style, safety and SUV-like versatility. This GTP easily has the most seriously sporty interior in a family sedan today. Bold shapes surround near seamless integration of a powerful stereo and effective climate controls. And it is among the first mid-sized family sedans with available front and rear side curtain airbags. 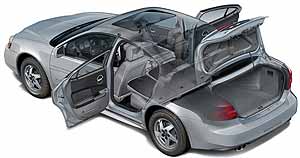 As to versatility, the rear doors open nearly 90 degrees for loading bulky items. While the rear seat is a little thin for long distance comfort, its split design folds to reveal a giant pass- through to the trunk. The trunk lid too opens wider and lower for easier access. When combined with the available front folding passenger seat, objects up to 9 feet long can be hauled with the trunk shut.

Up front the driver enjoys a full complement of performance-oriented, 3-dimensional analog gauges. Our GTP came standard with the head-up display as part of the Comp G package as well as a driver information center and steering wheel audio controls. This should put drivers firmly in control at all times.

Also under control is pricing. When the 2004 Pontiac Grand Prix goes on sale in April, the base GT will start at $22,395. The GTP begins at $26,495. Our test GTP, with the optional Comp G package topped out at $27,890. At that price, and with the level of features and performance packaged into the new Grand Prix, mid-size sedan buyers, and rivals, will have to take note.

The 2004 Pontiac Grand Prix significantly ups the ante while calling the competition on price. It looks as if the first of General Motors’ revised mid-sized sedans is holding a winning hand.