Ever since the original 356 Roadster in 1948, combining high performance with drop-top freedom has been a Porsche specialty. Now more than 50 years later, the designers at Porsche continue their successful endeavors with the latest 911 Carrera Turbo Cabriolet and the C4S Cabriolet. You know, if he were here today, Ferdinand Porsche would feel like one proud pappa!

That’s because the 2004 Porsche 911 Turbo Cabriolet and Carrera 4S Cabriolet are true to Dr. Porsche’s original vision, but with all the benefits of 21st century technology. 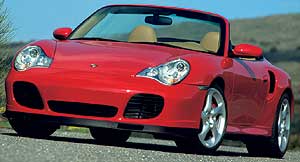 The Turbo Cabriolet is especially welcomed among Porsche-philes, having been absent from the line since 1989. But unlike the 930-based widow-maker of way back when, the 2004 Turbo packs modern traction and safety aids to tame its formidable horsepower.

And it is formidable. Output of the race-derived 3.6-liter twin turbo flat-six peaks at 415 horsepower, with torque output also hitting 415. The optional X50 package boosts that even further, to 444 horsepower and 457 pound-feet of torque.

If that seems a bit much, a Porsche fan can always opt for the Carrera 4S Cabriolet. Its normally-aspirated engine makes a bit less intimidating 315 horsepower and 273 pound-feet of torque.

Both of these sports cars are available with either a 6-speed manual gearbox, or our test cars’ Tiptronic automatics. Both cars also use the same viscous-multi-plate all-wheel-drive system with from 5% to 40% of the torque at the front axle. Torque delivery is further controlled by the Porsche Stability Management system.

All 911s are quick off the line, and even with an automatic transmission, our Turbo hit 60 in only 4.2 seconds. The quarter mile ends in 12.6 seconds at 115 miles-per-hour, barely slower than the 99-pound lighter Turbo Coupe we tested three years ago. The Tiptronic takes the edge off the Turbo’s normally raucous launch, softening low end power delivery. But at about 3,000 rpm, the rocket-like acceleration reasserts itself, and hurls the car down the track.

The C4S was more reserved, but still quick, 5.7 seconds to 60. The quarter mile took 14.2 seconds at 102 miles-per-hour. The C4S doesn’t fare quite as well with Tiptronic, the transmission robbing it of too much low end punch. It still has top end for days, but we miss that big whack off idle.

Both Cabriolets ride on a reinforced chassis with MacPherson struts up front and a multi-link rear. As expected, the feel is tight and responsive. In both Cabriolets, the extra chassis weight is evident, but it does not affect the awesome grip and precise handling. All-wheel drive and stability system do an impressive job of smoothly harnessing the Turbo’s awesome horsepower, but kicks in a bit more abruptly in the C4S.

Braking for both of our test cars is by optional 13-inch ceramic discs with one-piece fixed aluminum calipers. In the Turbo they delivered stops averaging 114 feet, while the C4S averaged just two more for 116 feet. All stops were super-straight and stable, with power and feel well beyond that of conventional cars.

But the 911 Cabriolets are not just about performance. Like all convertibles, they’re also about sunny days on winding country roads. To facilitate those solar excursions, Porsche has given both a fully automatic three layer top with a heated glass rear window. With a lightweight aluminum frame, and special plastic sound insulation, the top provides superior protection from road noise and heat, but folds quickly with just the touch of a button and stows neatly away beneath a hard tonneau cover. An available wind deflector cuts cockpit turbulence, but airflow is so well managed that we only used it on the highway.

Air flows easily over the sleek 911 shape. Bodywork is almost identical on both models, the Turbo wearing wider rear quarter panels with additional cooling vents, and a 2-piece rear wing that automatically deploys at speeds above 75 miles-per-hour.

The interiors are typical Porsche. That means roomy for such a small car, very well equipped, and logically laid-out. But they retain that handsome, slightly-retro Porsche style.

But style, performance and sunshine are not a cheap combination. The Porsche 911 Turbo Cabriolet carries a base price of $128,965. Forgo the turbos, and the price drops to $93,965 for the Carrera 4S Cabriolet.

But once you catch your breath and whether you go turbo or not, both of these amazing Porsche 911s offer the high performance and drop-top freedom that has been a Porsche specialty since 1948. And they are true to the original vision of Ferdinand Porsche, but with more performance and sophistication than even he could have imagined. Worthy offsprings of a very proud papa!