Few international business deals have been more controversial than Germany’s BMW acquiring the symbol of British refinement, Rolls Royce Motor Cars. Many feared that the unique British character of the hand-built Rolls would be lost to soulless Teutonic efficiency. Well, the first all-new BMW supervised Rolls Royce is here, with the legendary name Phantom, and it’s not just a BMW in British tweed.

Fear not, the 2004 Rolls Royce Phantom is a distinctly English car. There is nary a hint of the BMW proprietors, no matter how many components the brands share. None are obvious or otherwise in the imposing style of this massive 5,577-pound sedan. The 6 foot wide front view is overly dominated by a very traditional double-R grille. Note the headlights are the round ones set low in the facia. And the famed Spirit of Ecstasy can be automatically retracted to protect it from theft. The slab-sided body is over 19-feet long, and features a classic Rolls Royce roof line, with extra-wide C-pillars for passenger privacy. The Phantom rides on a limo-length wheelbase of 140.6-inches and large 540mm , that’s over 21 inches in diameter , cast aluminum wheels that will wear Michelin run-flats in the States. 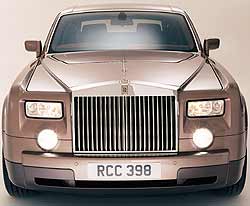 The Phantom is smoothly propelled by a 6.75-liter dual-overhead-cam V12 engine that is supplied by BMW. An enlarged version of the engine that powers BMW’s 760Li, the V12 makes 453 horsepower and 531 pound-feet of torque at only 3,500 rpm. It feeds those big rear wheels through a 6-speed automatic transmission. It includes normal and low modes, with the latter holding in lower gears when going downhill.

This combination provides what Rolls Royce calls ‘‘waftability’’ , a feeling of effortless propulsion that you have to drive a Rolls to really understand. That’s not to say that the Phantom is slow. Quite the contrary! Acceleration is exceptional for a car with so much mass, making us a believer by sliding rapidly from 0-to-60 in only 5.7 seconds.

And you can put the jokes about handling like the Queen Mary to rest right now. The Phantom’s space-frame chassis is supported by a front double-wishbone and rear multi-link suspension with air springs all around. Braking is all-disc, and big ones at that, with an unobtrusive anti-lock system. Together the Phantom delivers a driving experience that is silky in ride quality, with a fair amount of cornering body roll. Yet, the Phantom still exhibits cornering ability that is comparable with that of, dare we say it, a BMW 7-series. The power rack-and-pinion steering is so over-boosted, however, that it delivers almost no feedback to the driver. Which, by the way, are likely to mostly be, not chauffeurs, but owners we’re told. 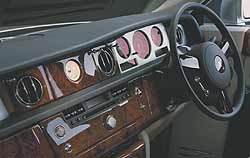 But it’s the uncompromising and highly rarefied luxury, not handling, that Rolls Royce owners demand most. And the Phantom delivers enough posh to satisfy a Saudi prince. The mechanical bits may come from Germany, but the super-spacious interior’s fine wood and leather are still hand-formed by English craftsmen. The dash alone uses up several board-feet. But its vintage, flat design is very understated. Note the round air vents with timeless push-pull control. A traditional three spoke steering wheel adds contemporary rim switches, while the gauges are forever simple, and very clear. And instead of a tachometer, there’s a ‘‘power reserve’’ gauge, to let the driver know how much oomph is available.

Other systems include automatic climate control that can be remotely activated to heat or cool the car prior to use, and a Lexicon 420 watt Surround Sound audio system with oversized fingertip switchgear. Navigation, communication, vehicle control, and television, where permitted, are supervised by a variant of BMW’s I-Drive system, with a flip-up display screen discreetly tucked behind a veneer panel. 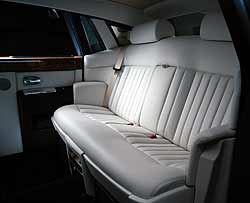 The rear power-adjustable ‘‘stadium’’ seating is accessed through front-opening coach doors, which allow for more dignified ingress and egress, without the twisting and turning forced on us by more pedestrian doors. The doors contain discretely stowed Rolls Royce umbrellas and can be automatically closed at the touch of a button. There’s also rear seat controls for climate, and an optional DVD entertainment system, fold-down tray tables for a spot of tea, and retractable footrests in the floor. And to top it all off, an imperial-size16.2 cubic foot trunk.

It’s as powerful, luxurious, and imposing as any car in Rolls Royce history, retaining that refined character that is 100-percent British. And it’s all yours for the built-to-order starting price of only 250,000 pounds. That’s about $320,000 to us.

No, the 2004 Rolls Royce Phantom is no BMW in British tweed. Not now, and it’s clear never will be. BMW has obviously taken great pains to not only preserve but enhance the ‘‘pure Englishness’’ that Rolls Royce alone is noted for. So, for the very prosperous, it’s a clear choice between this new edition classic and those upstarts at Maybach. The Rolls Royce Phantom is, in the end, a most worthy successor to Britain’s most famous, and formidable, luxury machines. Well done!