When we last tested the Saab 9-3 convertible back in 1999, we described it as quirky, cool, and oh so satisfying. But that was then and this is now, Saab’s all-new 9-3 convertible for 2004. Now, Saab calls this an all season, all weather car, and promises that it’s an absolute dream to drive. Sounds like the folks at Saab have put the last five years to good use.

And from what we see, it was time well spent. After all, since the 9-3 sedan was privy to a complete make over, it was only fair Saab give the same all-over treatment to the 2004 9-3 Convertible. So, they popped the top and ripped into the mechanics to reveal a sleeker, sun-shinier Saab with more power and good looks to call it all new.

Lowering the new 3-layer, hydraulically-operated, magnesium-framed soft-top, with added heat and noise insulation, is a one-touch affair. Top up to top down takes only 20 seconds, and utilizes a collapsible storage well called CargoSET to separate the top mechanism from the contents of the trunk.

Based on the 9-3 sedan’s GM Epsilon chassis, this convertible’s unibody is 3-times stiffer than its predecessor. Plus, Saab has fitted the new 9-3 with unique integrated safety measures like their DynaCage pop-up rear roll bars, active head restraints, adaptive front air bags, and two-chamber side air bags designed specifically for the more vulnerable occupants in a convertible.

The proportions of the 9-3 Convertible were also completely massaged. The 105.3-inch wheelbase is longer, with shorter overhangs and beefier twin-spoke 17-inch alloy wheels. A broad angled grille, a wraparound windshield, and swept back frontal styling flow neatly into its sleek wedge profile and tuck deep into the corners of the large wing-shaped light clusters at the rear.

Putting the wind in its sails, the 9-3’s all aluminum 2.0 liter twin-cam turbo-charged 4-cylinder engine is courtesy of the 9-3 Arc sedan. It pushes out 210 horsepower and an improved 221 pound-feet of torque. Transmissions include a re-tuned five-speed manual in Arc trim, a new six speed manual for the Aero, or a five-speed automatic with Saab’s Sentronic manual shift mode. Though our drivers found the Turbo is somewhat slow to respond, using the manual shift mode in our Aero-model did prove quicker on the track. The 9-3 ran the 0-60 in a flat 9.0 seconds, while the quarter mile passed in 16.8 seconds at 85 MPH. Overall, slightly bigger numbers than we saw in 1999.

Stopping this sporty-sunburst from 60 in 121 feet were its ABS-equipped, 4-wheel steel discs, with Mechanical Brake Assist, Electronic Brake force Distribution and Saab’s new Cornering Brake Control. Though pedal feel is soft, stops were consistent with no drama.

Stiff, stable, and safe describe handling. The all-independent suspension hardware includes struts up front and 4-links per side in the rear. Hard cornering understeer and body roll are on the mild side for a luxury front-driver. The precise rack and pinion steering gets help from Saab’s Re-Axs passive rear steering geometry, and electronic stability control is standard. With no cowl shake, the 9-3 Convertible connects well with the road. 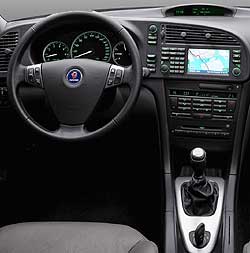 And, as if that isn’t reason enough to fall for this Saab, step inside this true 4-place convertible. The view’s great! All seats wear water-repellent upholstery. And deeply bolstered power front seats use integrated shoulder belts which allow easier access to the rear seats. The driver-oriented dash features an arc-shaped instrument panel that houses the adequate white on black gauges. The center stack stages audio-entertainment functions, climate controls, convertible top release switch as well as the Profiler, a dial linked to an on-screen prompt that allows for personal pre-sets.

But rear passengers get some bragging rights, too. The two-person rear cabin is far roomier than you might expect with gently bowed seats and interior trim that subtly joins the front and rear cabin. And for a little more superior boasting, the 9-3’s cargo arrangements top most competing convertibles. Top up allows for 12.4 cubic feet of storage; top down it shrinks to a still usable 8.3 cubic feet.

And though the summer’s set for us on the East Coast, we still have our eye on this drop-top, and encourage West Coast sun-seekers to strongly consider cruising their open roads in Saab’s sultry, new, and enormously pleasing, 9-3 convertible.