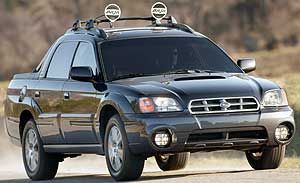 If there’s one word that describes the Subaru Baja, it has to be fun. This clever little multi-use crew-cab is as entertaining as it is practical. But some folks always want more. And what they usually want more of in the Baja is power, which Subaru now supplies in the new 2004 Baja Turbo. Fun and fast sounds like a natural combination to us.

So Subaru kicked it up a notch and Ð bam! The result is the 2004 Baja Turbo. A meatier version of their latest BRAT-mobile, the Turbo also stands a little taller this year. As the third model of Subaru’s all-wheel drive Baja cross-over, the Turbo tops out a range that includes the original Baja and the value-oriented Baja Sport. And as they say, third time’s a charm, but just what makes this Baja so charming?

Well, the Baja does get a boost in ground clearance. Up to 8.4 inches compared to last year’s 7.3. But, it’s what’s bursting under the hood that sends Subaru’s fun-junkies over the dunes. Its turbo power, from a 2.5-liter, twin-cam flat-4 that is a detuned version of the boxer used in the hot Impreza WRX STi. It adds 45-ponies to the band, making a swift revving 210 horsepower and cranking out 235 pound-feet of torque, 42 percent more than other Bajas.

A standard five-speed manual transmission really tests the Turbo, but we still felt its punch in our car’s optional 4-speed automatic with manual shift mode. The Variable Torque Distribution all-wheel drive system is also borrowed from the WRX series and splits torque 45% front, 55% rear, to enhance the performance driving feel.

On the track, no-wheel spin starts produced 0-60 runs of only 7.5 seconds, a near three seconds faster than a non-Turbo Baja. The quarter mile was also enhanced to 15.9 seconds at 89 MPH, a near two-second improvement. Relying on its power-assisted, 4-wheel disc, 4-channel ABS brakes, the Baja stops from 60 to 0 in a reasonable 133 feet. Results are steady, feel is good.

Despite the added ground clearance, ride and handling are familiar to our long term Baja. At first, the turbo pushes hard into corners, but then the rear can break loose and come around pretty quickly if you’re not paying attention. 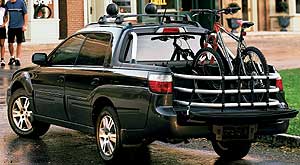 Also a familiar sight is Baja’s do-it-all body image. The light-duty truck meets sedan gained subtle changes, and aside from the Turbo’s propped up ride height, Subaru didn’t try to fix what wasn’t broke. However, Subaru did throw in a few uniquely-identifiable cues including a functional hood scoop, red-outlined BAJA badging, a short roof antenna, and 6-spoke 16-inch alloy wheels.

Inside the cabin, sporty looks and perks prevail. Standard Baja Turbo amenities include 6-way power driver’s seat, air conditioning, AM/FM audio with in-dash CD changer, power locks, windows, and sunroof. The two-person rear cabin is more than versatile. Flip and fold the seat to reveal Subaru’s Switchback System, a pass through door that extends the entire cargo bay inside. The short and somewhat narrow opening is good for carting long items. Add a tailgate extender and the total load floor length is over 90 inches.

Taking in the miles, EPA predicts that the Baja Turbo will deliver 18 miles-per-gallon in the city, and 23 on the highway, while 20 was our result from mixed driving.

But added performance does have its price. We estimate that the base sticker for the well equipped Baja Turbo will be $26,500, or about $2,000 more than its nearest normally aspirated kin. And you can buy a real compact crew cab pickup for that.

But it wouldn’t have either the performance or the cute brute factor of the 2004 Subaru Baja Turbo. So we say hats off to Subaru for adding more muscle to the Baja and more fun for weekend warriors of all kinds. Whether you’re a mild mannered, dirt-road die-hard, or a decorating do-it-yourselfer headed to the Depot, the Baja Turbo gets you there with a kick.