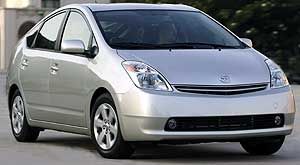 When Toyota introduced the Prius in 2000, it set a milestone as being the first super-efficient, gasoline/electric hybrid compact sedan. But the Prius had a problem. It was too small for most American families. Now, for 2004, Toyota has completely redesigned the Prius, stretching its body into a mid-size suit. But in a country still in love with thirsty, full-size SUVs, can more space, more power, and over 50 mile per gallon economy kick hybrids into a higher sales gear?

Toyota is confident that it will. The 2004 Toyota Prius is already the most popular ‘‘Green’’ automobile ever sold here, with over 10,000 orders on the books before it goes on sale.

This second generation hybrid’s enviro-friendly attitude carries over to its all-new styling. No sharp angles, fat fenders, or big tires here, just smooth, non-threatening lines. From its pouty-lip front bumper and steeply sloped windshield, to its domed roof and long hatchback, the new Prius, with a drag coefficient of only 0.26, is more aerodynamic than most sports cars. That’s despite being wider, longer and taller than its predecessor thanks to an all-new platform with 6-inches more wheelbase.

The gasoline/electric drivetrain, now called Hybrid Synergy Drive, is still a full hybrid system that can run on gas, electric, or both. A new high-voltage power converter and 50-kilowatt drive motor, capable of providing 295 pound-feet of torque almost instantly, are matched with an Atkinson Cycle 1.5 liter, 4-cylinder gas engine. The dual-overhead-cam four produces 76 horsepower and 82 pound-feet of torque on its own. With the electric motor engaged, combined output is 110 horsepower. The new electric motor and high-speed generator allow the Prius to spend more time in electric-only mode. This improves efficiency by 15-percent, and reduces emissions by 30-percent, qualifying Prius as a Super-Ultra-Low Emissions Vehicle in California. Federal mileage estimates are 60 city, where electric mode is used most, and 50 highway. Our real-world mixed driving test delivered an impressive 53 miles-per-gallon. 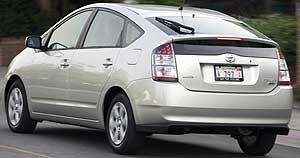 All power reaches the front wheels through a CVT continuously variable automatic transmission, which is controlled by a dash-mounted joystick shifter with a button to engage Park. More power means that the new Prius will run from 0 to 60 in 10.2 seconds, that’s over 2 seconds faster than the first Prius, and finish the quarter mile in 17.7 seconds at 79 miles-per-hour. Launches are smooth, thanks to the CVT and electronic throttle. But push it hard, and the tiny 4-cylinder engine does show a noisy side. In more sedate driving, the Prius system is remarkably quiet, with seamless shifts between gas and electric power.

Regenerative braking, which helps recharge the battery, is also available through the transmission shifter. Its ABS-equipped front/disc rear/drum brakes stop the Prius from 60 in a longish 142 feet. When stopped, the gas engine switches off to save fuel. Prius resumes on electric power only while the gas engine restarts.

Once rolling again, handling is more minivan than sport sedan, with lots of front plow and body roll. Steering feel remains minimal, but ride quality is much improved.

One clever option we like is the Smart Entry and Start proximity key. Sensors detect the key and unlock the car as you approach. The car can then be started with the touch of the power button on the dash.

The airy 5-passenger cabin is Toyota’s way of saying bring the family along! The longer wheelbase allows passenger volume to grow from 88.6 cubic feet to 96.2, or only 5% less than the mid-size Camry. Side and curtain airbags are optional. The control layout is inviting and sleek with the clear digital gauges shifted from last year’s center dash to a more traditional location in front of the driver. The center stack is now dominated by a multi-function touch-screen display that monitors powertrain energy functions, mileage, as well as climate, audio and available navigation system. Small storage abounds, including two glove boxes. Seating includes a pair of front buckets, and a split rear bench that easily folds flat for flexible storage, more than doubling the already large 16.1 cubic foot trunk. With its big hatch, the Prius is impressively versatile.

But, even with all the added style, room, and power, the base price remains $20,510, a tag that hasn’t budged since Prius was launched here three years ago.

One more reason we think the new Prius is a watershed vehicle. As the most fuel efficient mid-size car yet, the 2004 Toyota Prius is ready to lead gasoline/electric hybrid technology into the mainstream family car market, and turn all of its more traditional rivals green with envy.