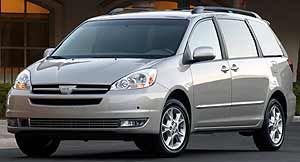 Once the staple of nearly every suburban driveway, minivans are slowly but surely being replaced by sport-utility vehicles. This has resulted in a significant drop in minivan sales in recent years. So minivan makers are fighting back. They’re trying to jump start interest by reinventing their people movers. Now, at Toyota that means an all new, larger Sienna. But is this enough of a change to lure modern mom and dad back into the minivan fold?

It had better be, because Toyota has changed everything! The 2004 Sienna is a totally new minivan from bumper to bumper, and wheels to roof. It’s also the most all-American Toyota product yet. It was designed in Michigan, styled in California, and is being built in Indiana. Plus over 90-percent of its content will be sourced from American suppliers.

And in the American automotive tradition, it’s big. The new Sienna overshadows its predecessor with a 119.3-inch wheelbase that’s 5.1-inches longer. Overall length is now virtually the same as the Honda Odyssey and Dodge Grand Caravan. It’s also wider, with an additional 4- inches between the wheels. It’s easier to enter, thanks to a low floor and available power assist for the sliding side doors and the rear hatch, and more open to the air. The sliding doors include power down windows. A first for an extended length minivan.

To move its bigger minivan, Toyota has equipped the Sienna with an all-new 3.3-liter dual-overhead-cam V6 engine. Variable valve timing with intelligence results in 230 horsepower and 242 pound-feet of torque, an increase of 20 horses and 22 pound-feet. The engine’s power flows through a new 5-speed automatic transmission, controlled by this Highlander-style, dash-mounted gated shifter, and to either the front wheels or to a new all- wheel drive system that uses a center differential to split power 50/50 front-to-rear. Our XLE test van wore 17-inch alloys with Bridgestone run-flat tires. With run flats there is no spare tire, but tire pressure monitoring is standard on Sienna.

In total, it’s a quality drivetrain that moved our Sienna from 0-60 in 8.4 seconds. The 1/4 mile takes 16.6 seconds at 76 miles-per-hour. Acceleration is strong, and throttle response right there. The engine is smooth and torquey through most of the rev band, only running out of steam as it approaches redline. The fine driveline performance is backed up by a very competent display on our handling course. Like its predecessor, the new Sienna uses a Macpherson strut front, torsion beam rear suspension. But the latest version delivers quicker turn ins, less front plow, and better stability. There’s still a lot of body roll, and you can outrun the power steering pump if you work it too hard. But overall, it’s a very competent platform. One that also delivers a ride that’s smooth, but never mushy. The Sienna did, however, produce a bit more road noise than we expected.

But fuel economy was about as expected. EPA estimates are 18 city/24 highway on regular grade gas. Our test loop average was 20 miles-per-gallon.

For an extra margin of safety, Vehicle Stability Control and Traction Control are standard on all-wheel-drive models. And the Dynamic Cruise Control option will maintain a safe distance from vehicles ahead. All Siennas use ABS-equipped 4-wheel disc brakes, which stopped our van from 60 in a slightly long average of 135 feet. As with most minivans, pedal feel was a bit on the soft side, and feedback was lacking. But the Sienna always tracked straight and true.

A new chassis means a new interior, which offers more room for both passengers and cargo, as well as a cleaner instrument panel layout. Front side and side curtain airbags are standard on the top drawer XLE Limited and optional on CE, LE, and XLE grades. The front bucket seats provide more support for both back and legs. Our XLE’s seats feature 8-way power adjustments for the driver and optional leather. A tilt and telescoping steering wheel is standard. 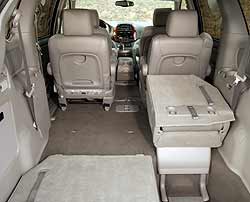 The second row seats are available in two configurations. The 7-passenger model comes with twin buckets, with the passenger-side seat able to slide sideways to form a bench. In 8-passenger models, the second row is a 3-way split folding bench, with a center section that slides forward to give parents easier access to children in car seats. Honda upped the minivan versatility quotient with a third row seat that folds flat into the floor. The Sienna goes one better with a two-section 60/40 split bench for even more people and cargo flexibility.

Speaking of cargo, space totals 43.6 cubic feet with the third row seats up, 94.5 cubic feet with them down, and a cavernous 148.9 cubic feet if you remove the second row. That’s in addition to enough small nooks and crannies for all the average family’s junk.

That’s extremely competitive with the Honda Odyssey and Dodge Grand Caravan as well as many mid-size SUVs. And it’s from the SUVs that Toyota hopes Sienna will win sales. And why not? It has more utility than most SUVs, and with all-wheel drive, delivers safe, four-season traction. Sienna designers made sure to include all of the must haves of the top minivans and SUVs, and then added a few of their own. The result is as roomy, comfortable, and capable a minivan as we’ve ever driven, and it does that well, too. If the 2004 Toyota Sienna doesn’t lure modern families back into minivans, then probably nothing will.