And now for something completely different, a sport-utility-vehicle! Okay, it’s not just another SUV. It’s the first SUV from German stalwart, Volkswagen, and it’s called the Touareg. And while VW may be one of the last to join the sport-ute tribe, it does so with an impressive technical and luxury resume. But in such a crowded segment, is the Touareg a case of better late than never, or too little too late?

At first glance, the 2004 Volkswagen Touareg looks familiar. That’s because it’s built on a unitized body and chassis co-developed with the Porsche Cayenne. Yet, to us, the Touareg is a more diverse sport-ute. It looks like a beefed up Passat wagon, handles pavement like a large touring car, conquers terrain like a tank, and still mimics the luxury of a posh sedan.

Named after a nomadic tribe from the Sahara Desert, Touareg literally means ‘‘free folk.’’ VW stylists clearly had freedom, delivering an exterior that is rugged and progressive. And though it does boast a recognizable VW front fascia, gem-like headlight casings and the generous air intakes added beneath the stylized upper radiator grille add classic off-road SUV appeal. 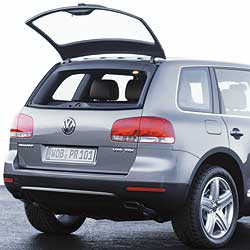 The Touareg’s slightly arched roof line includes serious cargo-rails for easy roof-top transporting. It all sits atop our test-ute’s standard 18-inch tires, as robust wheel arches and substantial bumpers also accentuate this able body. In the rear is a large hatch with a separate opening glass panel. Bounded by distinct lamp shapes, the Touareg is easily pegged as a VW in traffic.

The Touareg’s outside curves aren’t carried over to the inside with its sectional, VW-car approach to dash design. Our V-8’s standard wood trim with chrome and brushed aluminum accents fancies things up nicely. Gauges are simple and direct, if incomplete. There are standard side curtain airbags, a CD audio system, and dual-zone, or optional four-zone, climate controls. GPS navigation is also optional. Again like VW cars, the shifter resides in the center console, along with other controls, cupholders, and plenty of storage. 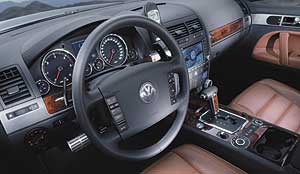 Our Touareg had the available leather upholstery and 12-way adjustable heated front bucket seats. Front room is generous. Likewise the 60/40 split folding rear seat that fits three comfortably. What’s missing is third row seating, something that more and more SUV buyers are asking for. Instead there is a good amount of cargo capacity; 31 cubic feet seats up, and expanding to 71 cubic feet with the seats down.

Our 5,300-pound Touareg is moved down the terrain by a 4.2 liter twin-cam, 40-valve V8 borrowed from Audi. Output, while far short of the Cayenne’s, is still substantial at 310 horsepower and 302 pound feet of torque. Towing capacity is a hearty 7700 pounds. A 220-horsepower V6 engine is standard, and a 313-horsepower twin-turbo V10 diesel is due here next year.

Touareg’s engines are linked to a standard 6-speed automatic transmission with Tiptronic manual mode. Standard too is VW’s new 4XMOTION permanent four-wheel drive system with a hi-low transfer case and hill ascent and descent control. Normal torque split is 50/50 front and rear. Console switchgear controls the standard locking center differential and optional rear locker. Add in up to 12-inches of ground clearance, and the Touareg is a very impressive off-road performer.

And whether on-road or off-road, the Touareg really gets up and goes. It launches from 0 to 60 in 7.8 seconds and wraps up the 1/4 mile in 15.8 seconds at 89 miles-per-hour. The V8 is robust and smooth off the line with great low end torque. Shifts are seamless.

The Touareg’s mid-size 112.4-inch wheelbase chassis rides on either a coil spring double wishbone suspension, or our V8’s electronic air suspension with an active damping system called ‘‘skyhook.’’ Skyhook has three settings: Sport, Automatic or Comfort. The air suspension raises or lowers the chassis to one of four heights depending on driving conditions and includes a manual override. Overall ride quality is decent, neither stiff nor spongy. Handling is a little soft too, with more body roll than we expected from the Skyhook system. Yet, with standard skid control, the Touareg is extremely stable in hard cornering.

Skyhook did a better job of controlling dive during braking. Four-wheel vented discs with ABS and Brake Assist stopped this VW from 60 to 0 in a good average distance of 127 feet. Fuel mileage is on par with most SUVs in the mid-size class. 14 city and 18 highway, with 17 being our everyday average.

But the Touareg is anything but an average mid-size SUV, with prices at something of a premium. The extremely well-equipped V-6 Touareg carries a base price of $35,515, or on par with the Lexus RX330. Our V8 starts at $41,315, which by the way is about half that of a Porsche Cayenne V-8. The Touareg with the premium package, with includes navigation, totals $53,265. We suggest you buy a map.

Though tardy, we think the 2004 Volkswagen Touareg was worth the wait. Its husky go-get-Ôem attitude and classic VW looks outshine otherwise tired SUV standards, and even add a few new tunes to the Sport-Ute repertoire.