In Europe nearly 70% of new cars and light trucks are diesels. In America, it’s less than 5%. And only one brand, Volkswagen, maintains diesels as a significant part of its U.S. lineup. Moreover, VW fans are fiercely loyal, egging VW on to offer even more of them, and they are. Enter the new Passat TDI and Touareg TDI. But what do these two new diesels mean for the rest of us?

The Europeans have a long history with diesels. It’s been 110 years since Germany’s Rudolf Diesel built the first compression ignition engine and 70 years since the first diesel passenger car, the Mercedes-Benz 260D, hit the road. But diesels have had a rough ride in the U.S., due in part to the poor reliability of General Motors’ block-cracking, crank-eating diesel engines of the late 1970’s and early 80’s, and because diesel tailpipe emissions are not as clean as gasoline engines. But that has not kept Volkswagen from being a champion for diesels in America, with the biggest number and variety of models.

And the VW diesel getting the most attention these days is the 2004 Touareg TDI. A high efficiency version of Volkswagen’s mid-size luxury sport-ute, the Touareg TDI is powered by a 5.0-liter, twin-turbo, V10 direct-injection diesel. It fairly quietly pumps out 310 horsepower with a stump-pulling 553 pound-feet of torque, with maximum torque available at only 2,000 rpm.

Power feeds to standard 4Motion all-wheel-drive through a 6-speed automatic transmission with manual shift mode, which propels this almost three ton SUV from 0 to 60 in only 6.3 seconds, and blasts through the quarter mile in 14.8 seconds at 92 miles-per-hour. Performance that leaves most petrol-powered SUVs in the dust. Yet the V10 diesel still delivers EPA fuel economy ratings of 17 city/23 highway. Expect 21 in normal driving. That’s better than some compact SUVs that weigh a full ton less. 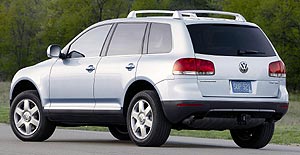 With diesel fuel averaging over $2 a gallon, the 20-percent mileage gain over the Touareg’s less powerful gas V-8 means substantial savings. Savings that soon will be gained with minimal added environmental cost. New high efficiency particulate filters, and soon-to-arrive low-sulphur fuel, means that diesel tailpipe emissions may be clean enough to meet stringent California emissions rules, rules that currently prevent light duty diesels from being sold there, as well as in the Northeast.

But diesel power doesn’t mean that you have to give up any of the passenger and cargo room, nor the luxury that buyers of high end sport-utes demand. The leather and wood-lined Touareg TDI offers top luxury amenities for 5, including satellite navigation, On-Star, and killer audio.

Of course, you will have to come up with $58,415 to own the Touareg TDI. And that’s the only rub. Touareg diesel power costs $15,000 more than a gas V-8. But there are a number of luxury SUVs that cost a lot more that we like a lot less.

Fortunately, Volkswagen offers a wide array of more affordable diesels, with the newest being the mid-size 2004 Passat TDI sedan and wagon. While its 2.0-liter turbocharged diesel 4-cylinder generates a meager 134 horsepower, its 247 pound-feet of torque is 20% higher than the Passat 2.8-liter gas V-6, and peak torque is reached at only 1,900 rpm.

Like the Touareg’s V10, the Passat Inline-4 uses Volkswagen’s Pumpe Duse high efficiency injection technology. The high-pressure system precisely meters fuel delivery directly into the combustion chamber for better atomization. That means more power yet less pollution. Power that translates into a 0-to-60 time of 9.8 seconds with the standard 5-speed manual-mode automatic, and a quarter mile run of 17.5 seconds at 79 miles-per-hour. The little 4-banger lacks the all-out thrust and smooth feel of its V-10 relative, but like all diesels delivers strong midrange pull.

But EPA fuel mileage ratings of 27 city/38 highway more than make up for the leisurely performance. That’s 40% better than the gas V-6. We averaged a fine 32 miles per gallon in typical urban driving. Plus with a long list of standard features, from full power and A/C, to CD-stereo, to side and curtain airbags, it’s easy to understand why we are so endeared to the Passat design.

Now that’s the kind of pricing that is needed to make diesels popular in America. In fact, no other car combines the precision of German design, refinement, and technology with true family-size room and high mileage efficiency like the Volkswagen Passat TDI. And both the 2004 Volkswagen Passat TDI and Touareg TDI are proof that you don’t have to give up performance, comfort, or utility to gain serious fuel economy. That’s why Europeans buy so many diesel vehicles, and why Americans may soon be buying a whole lot more diesels as well.