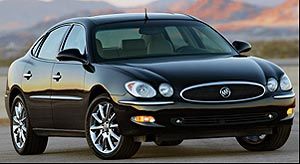 For most of its first century, Buick was known for its great road cars. They were effortless cruisers, with plenty of room and zoom. But in recent years Buick, like most luxury brands, has turned to SUVs for sales growth while their keynote sedans languished. But beginning now, Buick looks serious about reviving its passenger car lineup, starting with the all-new 2005. LaCrosse premium mid-size sedan. But is the LaCrosse enough to get Buick back on the road?

The Buick brand has been an American car staple for 100 years, and the premium mid-size 2005 Buick LaCrosse sedan is the first new car for their second century. Built on a heavily revised version of the Century/Regal W-Body, shared with the Pontiac Grand Prix, the LaCrosse boasts enough new parts to call it all-new. And it is new, in all the right ways. The look is recognizably Buick, but its voluptuous lines are very modern, with a continental flair. The nose wears an updated version of Buick’s signature grille with quad headlights fronting Jaguar-like tunnel hood blisters. The profile is sleek, conservative, but not old, with a total length of 198.1-inches. Longer than Century and Regal, wheelbase grows 1 inches to 110.5, ending with more Euro-design as sparkling Mercedes-shaped taillights flank an almost too clean trunk lid. Wheels are 16-inch alloys on CX and CXL models, aimed mostly at Century owners, with 17-inch rims on the top CXS trim. That model supplants Regal and hopefully will bring some younger buyers to the Buick fold. 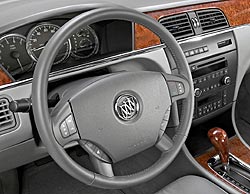 They will find a well-equipped interior that is typically Buick, wide and linear. But the LaCrosse cockpit is far more up-to-date than its predecessors. Clear overlapping gauges sit inside a deep hood. Side curtain airbags, XM satellite radio, and remote start are optional. Of course it wouldn’t be a Buick without plenty of wood grain trim and bits of chrome for the traditionalists, although materials and fit are of higher quality than past efforts. Long time Buick owners will also be pleased to see a choice of seating. You can have plush 6-way power bucket seats with a center shift console or a 3-passenger bench with column shifter. The bench has a Taurus-style flip-and-fold center cushion that converts to an armrest/storage bin. Leather trim and a tilt/telescoping steering wheel are standard on all but the base CX. Other equipment includes available automatic dual zone climate controls and audio upgrades that include an MP-3 capable 6-disc in-dash CD changer. For personal security, OnStar is standard.

The rear cabin benefits from the added wheelbase with a touch more leg room than Century or Regal. Seats split and fold for extra versatility, while the trunk is actually slightly smaller than before, but still a very accommodating 16 cubic-feet.

Power for the LaCrosse comes from a pair of GM favorites. The CX and CXL get the venerable 3800 Series 3.8-liter pushrod V6. It makes a healthy 200 horsepower and 225 pound-feet of torque. The CXS model will find a Cadillac Northstar derived 3.6-liter V6 under hood. Output is 240 horsepower and 230 pound-feet of torque, thanks to dual-cams and variable valve timing. Both are attached to front drive 4-speed automatics, with traction control standard on CXS and optional on other models. Drivetrain performance is now most refined. Both engines deliver plenty of pull, with less vibration thanks to a new aluminum engine cradle. But the 3.6 gets the nod for best behavior in all driving conditions.

The front suspension is the W-body’s proven MacPherson strut design, but heavily retuned and riding on stiffer springs. The rear is a three-link setup, with new gas-charged 4-stage dampers. The CXS Grand Touring suspension adds thicker anti-roll bars. And, another plus, Electronic Stability Control can be fitted to all models.

All this hardware provides sure footed tracking in corners, while retaining a ride that’s Buick smooth. There is still more roll than many rivals, but it is greatly reduced, with less chassis hop and no floating over choppy pavement. It’s a nice compromise between supple and spirit. The rack and pinion steering, Magna-Steer on the CXS model, delivers a surprisingly solid feel that is far more sporting. Brakes are up to the task as well. Four-wheel discs are standard. ABS is standard on CXS and optional on other trims.

But without a Cadillac price! LaCrosse prices start at only $23,495 for the base CX sedan. The CXL starts at $25,995. While the top-of-the-line CXS with Cadillac power begins at $28,995. That’s just about a hundred dollars more than the outgoing Regal, for a car that’s superior and younger in every way.

The Buick LaCrosse joins the soon to be replaced LeSabre as the only two passenger sedans Buick will offer for 2005. So the stakes are high, but we believe LaCrosse represents an excellent first step at rebuilding and refocusing the brand’s road mastering sedan heritage, and an excellent way to start a second century of Buick cars.