Chevrolet is a heavyweight in mid- and full-size SUVs. From Trailblazer to Suburban, they’ve got it covered. But the fastest growing segment is for small and compact SUVs, an area in which Chevy barely competes with the Suzuki-designed Tracker. Well, for 2005 there is a new dawn in small utilities at Chevrolet, and it’s called Equinox. But it’s no lightweight. Indeed, as the biggest kid in the compact class, will the Equinox also be a big bow tie affair?

Well, it may be too soon to roll out the red carpet, but with the 2005 Chevrolet Equinox already hitting dealer lots, you may want to fasten your cummerbund and prepare for the ride. This hearty compact sport-ute is dressed and ready to compete bumper-to-bumper with its rivals. Built on the same car-like unitized platform as the Saturn VUE, the Equinox at 189 inches is actually 7 inches longer than its GM cousin. Its stretched sheet metal leaves behind Saturn’s signature plastic body panels, and adds new character lines with fresh Chevy accents. And its 112.5 inch wheelbase is actually as long as some mid-size SUVs. That gives the Equinox a rather wide turning diameter of 41.8 feet, or some 8 feet wider than a Honda CR-V. But add that long wheelbase to a wide 61.6-inch track, and it all adds up to impressive interior room, cornering stability, and ride quality.

The Equinox sits atop standard 16-inch wheels and 17’s are an option. Styling highlights include an integrated roof rack, huge wraparound headlights and a mesh grille wearing the familiar Chevrolet truck chrome bar and bow tie. In the back, tuner-style tail lamps flank the lift gate and standard rear spoiler.

When it comes to power, Chevy stocked the Equinox with a standard 3.4-liter pushrod V-6. Its 185 horsepower and 210 pound-feet of torque are bested only by the VUE. Most import brand competitors are 4-cylinder only. The standard powertrain is front wheel drive with traction assist, but an on-demand hydraulically coupled all-wheel-drive system is optional. Power is diverted to the rear wheels only after slip is detected.

Engine torque feeds through a 5-speed Aisin Warner automatic transmission. The added gear ratio also out-guns Equinox rivals, and assures smooth shifts, good acceleration, and reasonable mileage. So how does all this hardware measure up? Based on our initial testing, expect a 0-60 time of 8.5 seconds.

As to efficiency, EPA fuel economy estimates are 19 city/25 highway with all-wheel drive. That’s great for a V-6 SUV and only one mile per gallon less on the highway than a comparable CR-V 4-banger.

Whether under power or coasting, in two wheel drive or four, this sporty black tie offering is supported by its MacPherson strut front end and four-link coil spring rear suspension. And though the Equinox does handle quite well, there is still quite a bit of body roll. The electric power steering has been recalibrated from its VUE roots and offers a great deal more feel and feedback. Its highest payload reaches 1290 pounds in the all-wheel drive version and the optional tow package allows for an impressive 3500-pound pull weight.

The standard and substantial 235/65R16 all season tires provide good grip and challenge rivals’ generally smaller rubber. All Equinox wear standard front disc rear drum brakes. Four wheel ABS is also standard on all versions, save the base front-wheel drive LS. Stopping is smooth and consistent with class expectations and has no remarkable characteristics. 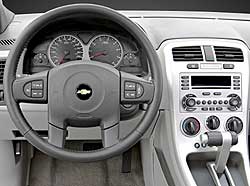 Along with its smooth ride comes a roomy, modern, and most convenient cabin. With its metallic finish, optional leather upholstery and backlit gauges, the Equinox exceeds the standard almost no-frills look of most in its class. The long center stack houses intuitive audio and climate controls as well as the surprising placement of the gear shift. A nice touch that allows useful storage space between the front seats. Safety is addressed with standard dual stage frontal airbags, and optional curtain side impact airbags.

Chevrolet has always been known for offering more than expected. The 2005 Equinox certainly does that. Not only does the Equinox dwarf its competition with its bigger ‘‘bod,’’ the newcomer also challenges them in price, total performance, and overall versatility. That certainly sets the tone for Equinox to be a highly successful small-ute event for Chevrolet. Let the party begin!