FFrom the ‘50s to the ‘70s, MOPAR muscle was a serious threat to everything else on the street. But like other automakers, Chrysler eventually had to surrender its brawn to changing times and environmental regulations, and the days of ‘Cudas, Challengers and big block HEMIs came to an end. But in the 21st century the HEMI is back, and so is the Chrysler muscle car. But this time it’s pumped up with a whole lot more than just horsepower.

From the moment the 2005 Chrysler 300C SRT-8 was unveiled at the California Auto Show, its combination of full-bodied charm and able movement set the stage for a long-running performance. And keeping its brute and beauty in balance, this won’t be a production they soon will drop the curtain on. Groomed with the same mini-Bentley looks of lesser 300s, the SRT-8 does add a flare for distinction. At the front it wears a deeper, more aggressive fascia featuring a body-color grille with chrome surround. Around back you’ll find a deeper rear apron and a small but fully-integrated deck-lid spoiler. And completing the transition are 20-inch forged-alloy wheels with high-performance three-season tires and of course unique SRT badging.

Pop the hood for the highest output V-8 the Chrysler Group has ever put in a modern sedan. The big-bore 6.1-liter HEMI propels the SRT-8 with 425 horsepower and a gripping 420 pound-feet of torque. That’s a 25-percent jump over the already impressive 300C HEMI, and even surpasses the per-liter rating of the legendary ‘‘Street HEMI’’ from 1966. And it does pay tribute to its roots by wearing the coveted orange and black cloak, a simple but appreciated gesture. The 6.1 HEMI is mated to an upgraded high-torque, five-speed automatic transmission with AutoStick manual shift mode.

And even though old man winter kept our crew from hitting the track, our street sprints confirmed that Chrysler’s predictions are spot on. Its killer-combo of engine and tranny will rocket this 2-ton freight-train from 0 to 60 in 5-seconds, with the quarter mile arriving in just 13.4 seconds at 104 miles per hour. That’s the kind of unadulterated performance you would expect of its HEMI-heritage. 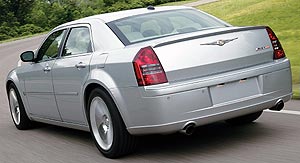 To help harness all that power, the ride height is lowered by half an inch to accommodate the more controlled front and rear suspension. Newly tuned bushings and shocks, Bilsteins in front and Nivomats in back, along with stiffer springs and heavy duty sway bars, help stiffen the chassis and eliminate the 300’s slight wallow. Plus, the electronic stability program has been recalibrated to let the driver have a little more fun before it reins you in.

Brakes also get a serious face lift, swapping the stock disc brakes for more race-worthy ABS-equipped vented Brembos both front and rear. An adjustment critical to bringing this much SRT-8 quickly to a halt.

Overall driving impressions prove confident and predictable. Steering is too numb, but the ride is pleasantly firm over all but railroad track. And the immediate power delivery is greeted by a great, throaty roar.

On the inside, the view proves changes are even more minimal, yet still distinct to the SRT-8. Higher bolstered leather bucket seats add a suede-like trim front and back, a performance-oriented instrument cluster finds its way inside, highlighted by a 180-mph speedo adorning the dash. Textured leather also wraps the steering wheel, shifter and door pulls. But even with options like the SIRIUS satellite radio, GPS navigation, hands-free cell phone connection, and power moon roof, it is still an understated atmosphere. Dimensions remain full size throughout with plenty of passenger and cargo space to spare.

But can you spare the mileage to drive the SRT-8? EPA estimates are 14 city and 19 highway. Still our test loop of 15 is no worse than the typical SUV.

So if you can still hang with those kinds of numbers, here are the sticker prices. The SRT-8 carries a base of $40,045. Tack on its $2,100 gas-guzzler charge and you’re actually dolling out $42,145 to drive it home. That’s over nine-grand more than a 300C. But compared to European factory tuned efforts, it’s still quite a bargain.

So, for this sophisticated speed-sedan, you must pay to play. But what fun you’ll have with this HEMI if you do! With the 2005 Chrysler 300C SRT-8, you’re getting true muscle and manners a four-door that can turn away from its routine and rip open the pavement without missing a beat. Now that’s a combination that could make anyone a MOPAR fan for life.