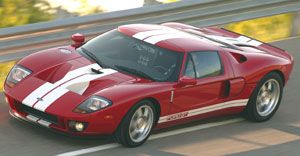 Fortunately, there is another GT that is much more affordable, the Mustang GT. From our earlier tests, it’s clear that the all-new 2005 Mustang GT offers more of everything that we’ve always savored in America’s original pony car, and that includes the return of something that we’ve really missed, namely the classic Mustang long hood styling. Those classic looks are wrapped around a tight new chassis that offers both modern levels of rigidity, and a multi-link update of Mustang’s traditional solid axle rear suspension, and in true GT fashion, a big V8 engine.

But here too Detroit iron has evolved with the times. It’s a 3-valve per cylinder version of Ford’s 4.6-liter all-aluminum single-cam V8. It’s not the GT’s supercharged monster, but with 300 horsepower and 320 pound-feet of torque on tap, it’s still serious American muscle!

Manual and automatic transmissions are available, both with five speeds. We naturally gravitated to the manual. And that’s the combination that we used to put the Mustang GT through its track-style paces at Savannah, Georgia’s 2-mile Roebling Road Raceway. To say that we had a blast is an understatement! The new Mustang GT is definitely fast, delivering a 0 to 60 time of 5.2 seconds; only 1.4 seconds slower than its supercar sibling, while the quarter mile rocks by in 13.8 seconds at 103 miles-per-hour. 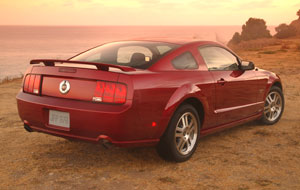 The 4.6-liter V8 pulls hard off the line and out of corners. The power band is wide and flat, but throttle response and delivery are very smooth. It’s an extremely user-friendly engine. The 5-speed manual gearbox is also easy to use. Feel is a little on the rubbery side, but all shifts are positive. As is the chassis, with quick turn-ins and mild front plow. The tight front end allows for much quicker direction changes than previous Mustangs. The rear solid-axle keeps the tail planted amazingly well, but you can still kick the back end loose with the throttle if you dare. 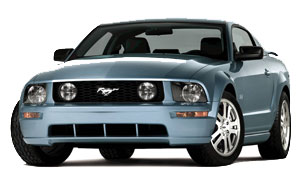 Nose dive and lateral roll are very well contained, yet the firm suspension is much more compliant than that of earlier Mustang GTs. It maintains the solid feel of a proper muscle car, but is also the most nimble, tossable chassis to ever wear the Mustang GT label. Pretty impressive for a performance car that only costs $25,640. It is a GT bargain.

But whether it’s GT or Mustang GT, on the track or on the street, both of these full-power players are true to the American GT creed of the need for speed. And no one spells GT quite like Ford.