To Ford performance fans, no car is more legendary than the GT40, the Ford that beat Ferrari! And now, over 30 years after the last GT40 was built, Ford has revived that unmistakable design in the form of the 2005 Ford GT. Is Ford’s super car now even more so? Let’s hit the track and find out!

Constructing a car that measures up to the GT40’s legendary performance and accomplishments is no small challenge. But Ford is confident that the 2005 Ford GT is a worthy successor to the LeMans winning original. The design team, led by Ford Special Vehicle Team director John Colleti, started with a sophisticated all aluminum space-frame chassis. The tall center tunnel makes it all very stiff plus it houses the fuel tank. All is supported with a cast aluminum double wishbone suspension and retro-style 18-inch front, 19-inch rear, BBS crafted wheels wearing Goodyear Eagle F1 Supercar tires.

Power for the huge 315/40 series rear rubber comes from a mid-mounted 5.4-liter supercharged dual-overhead-cam V8 that pumps out 500 horsepower and 500 pound-feet of torque. It makes as much power as the original GT40’s big 427, while still meeting all 21st century emission standards.

The whole package is wrapped up in aluminum, with some carbon fiber reinforcement bodywork, that almost perfectly mimics the look of the GT40. Ducted headlights flank a front cover designed for maximum radiator cooling. The cantilevered door panels channel more air into gaping side intakes. While down the clam-shell rear engine cover, a duck-tail spoiler sits atop big round lamps, and closely grouped center exhaust pipes. But to this historic shape were added very modern under-car aerodynamic aids that keep everything well glued to the road.

Compared to its 60s inspiration, the new GT is longer and taller. But Ford designers did such a superb job of balancing dimensions and styling, that you would have to compare the two cars side-by-side to really see the difference. And a close look is definitely worth the effort, because the Ford team really took the time to get all of the details just right, especially the cantilevered doors, which unlike the original’s have real drop-down power windows. 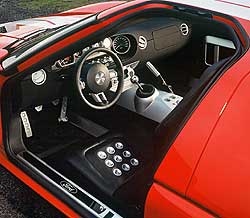 Like the body shell, the cabin is as cool as retro can get. The brushed magnesium on the center tunnel is flanked by a pair of vintage look leather bucket seats. But these seats are built on modern carbon fiber shells. The dash design has ergonomics that fit a modern car, yet features an array of classic style analog gauges stretched across an extra wide pod. Below the gauges sit a line of 21st century toggle switches for the lights, while well below that are controls for the standard CD audio system that most owners will likely never listen to. Simple climate controls are set well back on the center tunnel, right where the casual driver could be tempted to rest their right hand.

But on a circuit like Mazda Raceway at Laguna Seca, we gripped the 3-spoke steering wheel with both hands to clock some serious time in this reborn automotive masterpiece. While the GT may look retro, its performance is pure new millennium. A light, smooth, progressive clutch and a slick Ricardo 6-speed manual transaxle allow you to easily exploit the massive torque available from the supercharged V8, which just as easily racks up a 0-60 time of 3.7 seconds.

Despite steering gear that is low on feedback, corners yield sharp turn-ins with minimal levels of front push. Plus, with the mid-engine’s weight bias, you get early warning of any rear end twitch. Hammer the gas out of the corners, and the GT displays exceptional traction. Wheel-spin is easily handled thanks to the engine’s very smooth power delivery. The old GT may have been a superb race car, but it was never this nimble.

And when it comes time to stop, massive 4-piston Brembo cross-drilled ABS-equipped disc brakes pull its 3,400 pounds down from track speeds with real authority.

But like the GT40 of old, today’s GT is a pretty stiff ride. Ford says the seats in the production car will have better padding and support so long distance excursions should be painless.

None of that really matters, however, since the Ford GT is the coolest, most desirable super car to come down the pike since the original GT40 first drove into the winner’s circle at LeMans. No wonder Ford says the few hundred of these $139,995 beauties to be built for the first year are already spoken for. The 2005 Ford GT is a fitting tribute to Ford’s legendary GT40. But it’s also a totally modern machine with the style, incredible performance and unique personality that will establish it as a legend all its own!