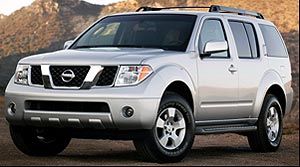 Keeping up with the Jones’ is never easy, but keeping up in the truck and sport-utility segments is even harder. Now Nissan has done a fine job with their full-size Armada SUV and Titan pickup. And for 2005 the Armada and Titan get a new teammate, the mid-size Pathfinder sport-ute. Let’s see what this new player adds to an already heady team.

Hardly a true newborn, the Pathfinder name was attached to Nissan’s first foray into SUVs for North America back in 1986. Looking twenty years straight in the face, the all-new 2005 Nissan Pathfinder is now tougher, bigger, stronger and more powerful than ever before. Bearing a strong resemblance to its big brother Armada, the new Pathfinder boasts sharp lines, bulging fenders, short overhangs, and 16-inch wheels, for a modern, aggressive look.

Under that look is a 112.2 inch wheelbase that’s up 6 inches over the previous Pathfinder, with the 187.6-inch overall length up 5. Indeed, Pathfinder has grown in nearly every dimension, yet held onto its athletic, lean image that separates it from its big brother. 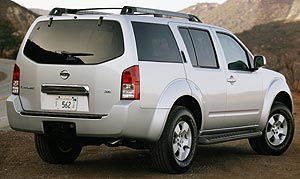 Nissan’s goal for Pathfinder is to be their most versatile mid-size sport-ute, one for both outdoor-off-road enthusiasts as well as backyard-black-top suburbanites. Pathfinder is armed with Nissan’s fabled twin-cam 24-valve V-6. It’s been stroked from 3.5 to 4.0-liters, with horsepower up 30 to 270, and torque up 26 to 291 pound feet. Complete with electronic throttle, continuous valve timing, and variable induction control, the engine produces loads of oomph off the line with no dead spots in the flat rev band. With enough grunt to challenge quite a few V8 engines out there, the new powerhouse is paired with a standard electronically controlled 5-speed automatic transmission and is capable of a maximum towing capacity of 6,000 pounds, and an integrated tow hitch is also standard on all models.

Ready for any terrain, the Pathfinder wears a new fully boxed, all-steel frame based on its Armada kinship and, like previous years, is offered in 4x2 or 4x4 configurations. On the trail the Pathfinder is no joke. Besides its independent rear suspension, 9-inches of ground clearance, and automatic 4x4 transfer case with ultra-low range, there’s electronic trickery like hill start assist and hill descent assist, along with electronic stability control. The new Pathfinder’s off-road traction system also includes an advanced 4-wheel Limited Slip system that is standard on 4WD SE off-road models.

On the road, the Pathfinder handles with car-like ease. The ride is smooth without feeling overly soft and though not as plush as some car-based SUVs, it’s still far from stiff. As are the Pathfinder’s 4-wheel disc ABS brakes with Electronic Brake force Distribution. And once you’ve stopped, take the time to look inside.

The Pathfinder’s interior is naturally roomier than previous years and primed with the comfort and amenities necessary to compete in its class. Available leather seating, large center console, and the ability to now carry seven passengers in three rows of seats also makes the new Pathfinder that much more appealing. Standard equipment includes a full range of power accessories. Air conditioning is included with dual-zone automatic climate control available. Tunes are by way of powerful CD stereos, with a DVD Navigation system optional on the top trim level.

Unsurpassed versatility is a main reason why most people buy SUVs, and the new 2005 Pathfinder meets the challenge with 64 seating and cargo configurations. The front passenger seat folds flat as do the second row seats and new third row seats as well. Under seat storage is certainly a plus and cargo capacity reaches its max at 79.2 cubic feet. Occupant safety features include front, side, and curtain airbags with rollover sensor. They’re standard on the top LE trim and optional on other models.

Nissan has earned a reputation for building tough, solid SUVs. And in the immensely competitive mid-size SUV market, the 2005 Pathfinder is more than capable of holding its own. True to its name, the first Pathfinder paved the way to an expanding lineup of Nissan SUVs. Now, as the newest member of a successful sport-ute team, the 2005 Nissan Pathfinder is ready to blaze another trail for rivals to follow.