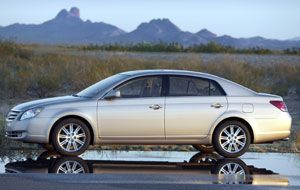 The Avalon is Toyota’s full-size American sedan. It was designed especially for American drivers, and it’s built in Georgetown, Kentucky. But while the Avalon has been fairly successful, it has never been known as stylish. Well, that changes with the all-new 2005 Avalon. It’s sleek, strong, and luxurious, and it could become America’s full-size favorite.

Toyota’s varsity player debuted for 1995 and was redesigned for 2000. But this third generation 2005 Toyota Avalon sports much more of the body, beauty, and brains needed to win over diehard red, white and blue spectators.

The Avalon still rides on a Camry-based platform. But outside of some basic hardware, you would be hard pressed to make the connection. Everything about the new Avalon says premium sedan. Think Buick, not Chevy.

Available in four grades, XL, Touring, XLS, and Limited, the Avalon has a longer, wider, more distinctive skin, one that would look right at home on a progressive Buick. It wears a sleek chrome-accented grille, a sharp front to rear character line, and more attitude. 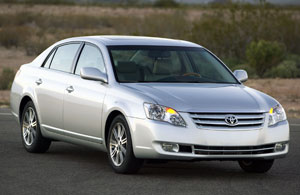 Its fastback, Lexus-like form flows swiftly to the rear and highlights its stepped taillights and dual exhaust. At 111-inches, the wheelbase is 4 inches longer than before with 5 inches added to the overall length. All atop standard 16-inch alloy wheels or 17’s on all up-level trims. And to match its curvy new style, the Avalon provides an equally smooth driving experience.

The Avalon sits on a MacPherson strut front and a dual-link rear suspension, both with a stabilizer bar. The Touring model gets a slightly more firmly tuned suspension. Even with the somewhat over-boosted steering, Avalon shuffles its way through the cones quite admirably, as long as you don’t push it too hard. There is some torque steer as you power out of a corner and considerable body roll in emergency maneuvers. So, even in Touring trim, Avalon is not a sport sedan. Still, Avalon is far more agile than most in its class.

But the Avalon’s best performance attributes lie under the hood. Its new all-aluminum 3.5-liter dual-overhead cam V6 with variable valve timing delivers 280 horsepower—that’s a third more than the previous Avalon—with torque up 40 to 260 pound-feet.

All trims are matched to a 5-speed automatic transmission with sequential shift mode. And though an improvement over the previous car, we still found shifts a little inconsistent. But redemption is key, and this is one serious V6. Explosive off the line, power is quick, smooth, and responsive. It arrives at 60 in just 6.5 seconds. The quarter mile passes in 15 seconds at 99 miles-per-hour. Impressive numbers for any family sedan.

Braking is respectable, with stops from 60 averaging 139 feet on a very cold track. Our drivers noted the all-disc ABS brakes produce little fade, plenty of pedal travel, and minimal nose dive. Brake Assist is only available on XLS and Limited trim, packaged with traction control and stability control. 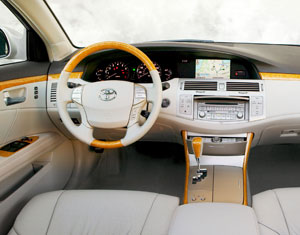 Inside the Avalon the cabin is cavernous and very well equipped. The styling is a big upgrade over the previous car. The dash is wide and linear, a form preferred by older clients. Likewise, switches are oversized and logically placed. But this Avalon hopes to also lure younger buyers. Gone is the front bench seat and column shift favored by seniors. All Avalons are now fitted for 5 occupants. The standard fabric covered front buckets, with 8-way power for the driver, face Lexus-style Optitron gauges and a tilt/telescoping wheel with audio and climate controls.

Better equipped than its predecessor, the new Avalon offers such standard luxury touches as a nine-speaker CD stereo, and dual-zone automatic climate control with filter. Navigation is optional, as is a basic trip computer.

To ensure safety, Toyota has fitted the cabin with front seat side impact airbags, and side curtain airbags for front and rear passengers.

The rear seat also reclines and has a locking pass-through to the trunk. But the Avalon’s new style did take its toll on trunk space. Its 14.4 cubic feet of cargo room is down from 15.9 last year. It is the smallest of full-size family sedans.

Something Avalon owners won’t have to compensate for is fuel economy. EPA estimates are 22 city and 30 highway. Our test raked in a very fine 26 miles-per-gallon in a mixed loop.

As for prices, Toyota’s Buick challenger is priced like one. The base price for the Avalon XL is $27,890. The Touring model runs $29,140 and throws in treats like leather trimmed seats and a rear spoiler. Go for the XLS and $31,340 gets you a power moon roof, in-dash 6-disc CD changer and an anti-theft system. And finally, the Limited model tops out at $34,080 with an upgraded JBL audio system, heated and cooled seats, seat memory, keyless start, and more.

But the 2005 Avalon had to offer more. Established premium brands like Buick, Chrysler, and Mercury are also launching new products. Top notch rivals like the Nissan Altima and Ford’s Five Hundred also cannot be taken lightly. Still, none of those cars can match Toyota’s reputation for total quality and reliability, and that’s a big comfort for young and old alike. Only now, with a giant infusion of glam to the game, there are so many more reasons to consider the Avalon than just common sense.