Ten years ago, young car buyers were mostly concerned with price and fuel economy. But nowadays, it’s all about turbos, dubs and bling. So if you want to sell cars to this demographic, you better have something fast and flashy in the showroom. At Toyota dealers, that means the 2005 Corolla XRS. So let’s see if Toyota’s attempt at a pocket rocket can launch sales in the youth market.

At a first glance it certainly looks like it could! And when taking a closer look at some hard numbers, it’s even more evident that the new 2005 Toyota Corolla XRS is now a real player in a trend that has taken the once lowly economy car to new fast and flashy heights. While the subcompact Corolla has long been a popular choice for young buyers, its image was pretty conservative. Now Toyota is changing that tune with the XRS, matching sporty styling with a performance power train.

The XRS shares most dimensions with siblings, including a 102.4 inch wheelbase with an overall length of 178.3 inches. But ride height, at 58.1 inches, is lower by halfan-inch to enhance stance and handling. Much of the curb appeal of the XRS comes from the Corolla S. Its sporty trim kit includes smoked headlights, a color-keyed bezel around the grille, integrated fog lamps, and an aerodynamic body package with underbody spoilers, sculpted side rocker panels, upgraded 16-inch aluminum-alloy wheels with performance treads and rear mudguards.

But XRS gets its unique get-up-and-go from a high-strung version of Toyota’s familiar all-aluminum 1.8 liter, twin-cam, 16-valve 4. With variable Valve Timing with intelligence, output is up 40 to 170 horsepower, with a slight gain in torque to 127 pound-feet. Get the revs up and the XRS has a fairly strong launch, with power now spread more evenly across the torque curve. Our tester was good for runs to 60 in 7.6 seconds, a second and a half faster than the last Corolla we tested, with the quarter mile coming down to 16.1 seconds at 89 MPH. The engine changes character from civilized to wild hair at 6,000 rpm and above. Like the engine, the 6-speed manual is also used in the Celica GT-S and Matrix XRS. It’s the only transmission for this hotrod Corolla. Known for long throws and a rubbery feel, it works better here, moving quickly with good precision.

The same can be said for the XRS’ standard ABS brakes. With 10.8 inch ventilated discs in front, and drums in the rear, we rate panic stops from 60 of 125 feet as good, with overall pedal feel being very competent.

Out on the open road, our camp compared the XRS to the Civic Si and Mazda 3 S. One driver noted that the ride was a little softer than rivals, but never floaty, and its saving grace a stiff body and overall sharper handling. 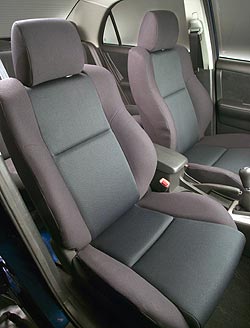 And speaking of sharper, larger, better equipped interiors are also becoming the norm for subcompact sedans, and this new XRS wears the best interior we’ve ever seen in a small Toyota 4-door. The Corolla is roomy, with a passenger volume of 90.3 cubic feet. The XRS’ sporty front seats are comfortable, supportive, with height adjustment for the driver. A leather-wrapped tilt steering wheel is also standard, along with Optitron sport speedometer and tachometer, an AM/FM/CD six-speaker stereo, and a chrome accent shift knob. With its unique cloth interior and above average materials throughout, the XRS feels just as pleasing inside as it does under the hood.

Jump in the back and you’ll find good room for two adults. The XRS loses the split fold seat backs of other Corollas. In its stead is a rear cross brace. It, and a front shock tower brace, greatly stiffens the XRS body for far less twist in turns. And behind the cross brace, a generous 13.6 cubic feet of cargo space. Optional safety features include front-side impact airbags and side curtain airbags for both rows.

So how much for some good old Corolla reliability mixed with a whole lot of XRS fun? Well, the walk-up price for the new Corolla XRS is $17,995. That’s just $3,775 more than the entry level Corolla CE.

While there are a lot of subcompacts with even more aftermarket bling bling, the 2005 Toyota Corolla XRS is not just a pretty face. With the XRS, Toyota has zeroed in on the youth target and given them a serious factory-ride to consider. This is a subcompact that doesn’t compromise the persona and payment this generation desires, all backed with the Toyota name they can trust. So, light em up and let em ride!