Like a well-seasoned athlete primed for competition, the fifth-generation BMW 3-Series storms into 2006, all ready to defend its title as the quintessential sport sedan. With streamlined aggression and more power and performance, the 3 is clearly stronger than ever, so much so that there may be no competition at all.

In the auto world, when you achieve iconic status, those who put you there will accept nothing less than rolling perfection. That’s the challenge facing the all-new 2006 BMW 3-Series. And the fifth generation of the world’s best known sport sedan meets that challenge head-on, starting with styling. Inspired by the 5-Series, tighter lines, improved aerodynamics, and sharper sheet metal, achieve a fresher, but still characteristic look.

Transmissions are all 6-speeds. A standard manual and optional Steptronic automatic for both, plus a Sequential manual gearbox for the 330i. 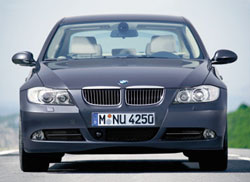 So how do these dueling sixes stack up? Well, our test 325i automatic will sprint from 0-to-60 in a none-to-shabby 7.2 seconds. The manual will do it in 6.7 seconds, while the 330i manual comes in at 6.1 seconds. The variable-valve timing six revved willingly to redline, delivering fine high end power after a sluggish leap off the line. The exhaust note is low but there’s still a growl.

There’s nothing but praise for the response of the chassis. New to the 3-Series is a double-pivot strut front and 5-link rear suspension. That configuration is well-suited to a car with a 50/50 front-to-rear weight balance. Reaction is rapid in any lane change or emergency situation. So quick that most drivers will welcome assistance from the expanded Dynamic Stability Control.

Steering feel is heavier than its predecessor, but in a totally sporting way. Optional is BMW’s Active Steering System with a wider variable ratio While there is also less feedback, it can reduce oversteer in emergencies.  The all-vented disc brakes also score well, with stops from 60 averaging 129 feet. The larger discs delivered smooth and stable stops, with great pedal feel and little ABS pulsing. In the bump-and-grind of daily driving, the 325i delivers a firm yet sporty and compliant ride exhibiting excellent interior noise control.

The new 3-Series interior is 2.2 cubic feet larger and standard Burl Walnut trims the cabin, yet the look is more functional than fancy. Buyers can choose from the standard single hood, driver-oriented instrument panel, or optional dual-hood version with room for a simpler-to-use navigation/iDrive display. Two audio systems fit the 3-Series. Standard for the 325i is a 10-speaker dual-subwoofer CD/MP3 stereo. Optional to our test car and standard on the 330i is a 13-speaker Logic 7 system. 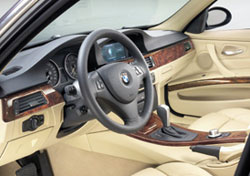 Shared standards are tilt/telescoping leather-wrapped wheel with audio controls, cruise control, Start Push Button ignition and 2-way power moon roof. At the back, passengers will welcome the slightly better knee room. But it’s still a tight fit. The optional split and fold seat backs include a small trunk pass-through. And trunk space is also up, from 10.7 cubic feet to 12. Plus losing the spare adds a storage bin under the load floor.

The 2006 BMW 3-Series keeps evolving, improving, and staying ahead of its rivals in the two things the brand is most noted for: technology and driving feel. The new 3-Series is still the affordable sport sedan benchmark, and still without peers.

The 5th generation 2006 BMW 3-Series is a very important vehicle for the renowned German sport sedan maker. The 3-Series accounts for more than a third of BMW's global sales. So, adding this benchmark sport sedan to our long-term fleet made perfect sense. Except that we made sure our 3-Series would stand up to any road in any weather. So, we ordered a 330xi with automatic all-wheel drive.

After a brief 6 weeks and 2,200 miles, so far so good with the 330xi. Its 255-horsepower inline 6 is barely broken in, and it's not only willing, but with the 6-speed manual gearbox, reasonably frugal at 21.9 miles per gallon.

In our test we praised the interior for both its functionality and luxury. And the vastly redesigned iDrive joystick control system is now almost likable. And there is much to like in the 2006 BMW 3-Series, our MotorWeek Drivers' Choice Best Sport Sedan of the year.

We're a little further along in our long term test of this 2006 BMW 330xi, our Drivers' Choice pick for Best Sport Sedan. Time and mileage is going on 4 months and 4,200 miles. While we've had little snow or rain since the 330xi arrived, the fact is its automatic all-wheel drive still gives us an extra measure of security no matter what the road or weather conditions.

Its 225-horsepower inline 6 seems smoother every day, just as we have detected the first bits of notchiness in our car's 6-speed manual gearbox. Given how hard we push the 330xi, we find fuel economy of 21.1 miles per gallon still reasonable.

We definitely noticed the softer character of the 5th generation 3-Series in ride, handling, and interior appointments. Yet, it remains a remarkably well balanced and, despite the awkward I-Drive system, very entertaining car in every way.

When it came time to pick our MotorWeek 2006 Drivers' Choice Award winner for best Sport Sedan, the new BMW 3-Series easily stood above the rest. So, with no surprise, the last 6 months with our all-wheel drive 330XI has been a time of confirmation. Confirmation that the 3-Series remains the benchmark of its class. Confirmation that a sophisticated all-wheel drive system can be a handling plus whether it's wet or dry. And, confirmation, that being a top tier sport sedan no longer requires any compromises in comfort.

Our 330XI has a terrific and composed highway ride, and more luxury touches than anyone could ever need. We're even getting used to the simplified I-Drive control system.

After 6,500 miles it has also been totally fault free. Its 255-horsepower 3.0-liter inline 6 seems smoother every day. Plus, we've even seen fuel economy rise to 22.0 miles-per-gallon of premium gas. In a world where most car companies promise vehicles without compromise. The BMW 3-Series is one that definitely delivers the goods.

We can see the end from here. The end of our year with this BMW 330xi, that is. We're into our 9th month with this engaging all-wheel drive, all-weather sport sedan.

We know this car inside and out by now, and the praise continues to be unanimous. Sleek, sporty, and luxurious, with excellent response and handling. In short, everything you could want in a premium sport sedan that has to deal with everyday realities.

But, just because we are charmed by the 330xi doesn't mean we wouldn't change something rather basic. BMWs in general have embraced technology to the point of letting the gadgets like the iDrive control system get in the way of the driving experience. And it is the driving experience that makes BMW so impressive.

It's been a fast year with our BMW 330xi. After some 16,000 miles, we're more enamored than ever with this all-wheel drive, all-weather sport sedan.

We've heard from a lot of owners of the latest 3-Series about excessive tire noise and we've experienced it too. We've rotated the run-flat tires and kept a close check on tire pressures. The noise has not gone away, but it has been reduced.

Otherwise the performance provided by the balanced chassis and willing 255-horsepower 3.0-liter inline 6 have met and exceeded our expectations. Plus, we've seen fuel economy continue to rise, now standing at 22.6 miles-per-gallon of premium.

The BMW 330xi is fast, sure footed, and always entertaining. And even with tire noise, and the much maligned iDrive control system, it's a suburb machine.

The end of winter brought to an end our test of this 2006 BMW 330xi. After nearly 20,000 miles, we remained high on this all-wheel drive sport sedan.

Our only real gripe mirrors many owners of the fifth generation 3-Series; noisy run-flat tires. We've gotten more complaints from viewers on this subject than any other in recent years.

We were told to rotate the run-flats and keep a close check on tire pressures. We did that. And, the noise was reduced, although it did not go away.

Otherwise the well-balanced chassis and willing 255-horsepower inline-6 have exceeded our expectations. Plus, we saw rock-solid fuel economy of 22.5 miles-per-gallon of premium.

The BMW 330xi is sure footed, and always entertaining. And even with tire noise, and the annoying iDrive control system, it's a treat.