Year in and year out, the BMW M5 has reigned as MotorWeek‘s favorite sports sedan. Its amazing combination of 4-door luxury, 2-door handling, and super car power make it unequaled in the world of high performance sedans. So can this new generation 2006 BMW M5 top a car that was already at the top of its class?

Few cars have ever excited the MotorWeek test crew like the BMW M5. So it was an excited gang of motor heads that anxiously awaited the arrival of the all-new 2006 M5. And from the moment that it arrived, everyone agreed that it is one of the most stunning 4-doors in BMW history.

With its deep ground-hugging bodywork, and big 19-inch cast alloy wheels, the latest M5 presents an image of serious aggression. And backs it up with one of the most potent engines to ever reside under the hood of a 4-door sedan. That engine is BMW’s 5.0-liter dual-cam 40-valve V10. Press the console’s power button and it delivers a stunning 500 horsepower and 383 pound-feet of torque. Don’t press it and you’re limited to a still impressive 400 horsepower output.

It all hits the rear wheels through a super-sophisticated 7-speed sequential manual gearbox. Steering wheel paddle shifters are provided for manual gear changes, but it also functions as a full automatic. And there are 11 different shift programs from commuter mild to all-out sport.

The super-stout 5-Series chassis is supported by a straightforward MacPherson strut front and multi-link rear suspension. But that is in turn supported by BMW’s Electronic Damper Controls, plus a very forgiving electronic stability control system, and all-season traction control.

With all systems engaged, and in their most aggressive modes, the M5 smokes it way to 60 in only 4.4 seconds! The quarter mile blasts by in 12.7 seconds at 117 miles-per-hour. That’s impressive, even considering that the maximum acceleration Launch Control function included on Euro-spec cars fell victim to liability concerns here.

This huge velocity comes despite the fact that the V10 is fairly soft off idle, really coming to life above 3,000 rpm and building rapidly from there. Shifts are fast, but very abrupt, in both manual and automatic modes.

Of course we knew that the M5 would be fast, but with its weight now up to 4,012 pounds we wondered if it could still close tackle the corners. So we hit the bends of Savannah, Georgia’s Roebling Road Raceway to find out. From the first turn of the wheel, you feel the extra weight, but also the M5’s still perfect balance. We selected Sport, the most aggressive of three suspension modes, for our laps. Combined with the fast variable ratio steering, now with two levels of assist, directional changes were lightning quick, even though the car’s heft pushes the front end harder in tight turns than in earlier models.

But throw this M5 into a long, fast sweeper, and the car responds with tons of grip and rock solid stability. Stability control and BMW’s M variable differential lock keep the tail planted even when you are overly aggressive with the V10’s prodigious torque.

While the massive cross-drilled brakes with 2-piece compound rotors will haul the car down from 60 in a short 120 feet, and down from track speeds with power to spare.  So, even if it doesn’t feel quite as nimble as before, overall the new M5 is an incredibly capable car. 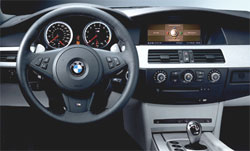 Long, fast drives will also be in a lap of luxury not found in the previous M5. The cabin is packed with comfort and convenience, with a long options list. Our favorite extra was the multi-function active seat system, which automatically tightens outside support in response to cornering forces, followed closely by the optional head-up display.

The clean Teutonic dash carries both dual-zone automatic climate controls and a Logic7 surround sound 6-disc audio system, adjusted, like many other functions, by BMW’s iDrive, an infotainment control system that still splits the MotorWeek staff.

On the other hand, we all loved the new Mdrive which allows the driver to select their favorite settings for everything from power to seat position with the touch of one button on the steering wheel.

Rear seating is roomy for two, but the seat back doesn’t fold. Not really a problem, however, since the trunk space is a sizable 14.0 cubic-feet. But that number pales in comparison to the numbers on the sticker. Base price for the M5 is $81,895. With all options on board, our test car comes to a stunning $94,165.

There’s no doubt that the 2006 BMW M5 is powerful, capable and sophisticated, but it may take time for fans of its lighter, more nimble predecessors to warm to its more substantial feel. We still believe the M5 is tops in its rarified class, yet that class is showing some maturity. But regardless of how you split hairs, the 2006 BMW M5 is an amazing automobile.