Cadillac has long been known more for luxury than performance. But then came last year’s hot rod CTS-V and a championship winning racing season. Now Cadillac adds another arrow to its high performance quiver with the 2006 STS-V. A bigger car with bigger power, and a new definition of Cadillac.

Over the last decade, Cadillac designers, engineers, and marketing personnel have worked hard to change the public’s perception of General Motors’ century-old luxury nameplate. A successful racing program in the Speed World Challenge series, as well as the Euro-tuned CTS-V sedan, have certainly helped redefine Cadillac as a sophisticated, globally focused “luxury with performance” oriented brand.

Well, the next step in that evolution is the 2006 STS-V, or as we like to call it, the big brother to the CTS-V. This more muscular version of the all-new STS is every inch the factory-sanctioned hot-rod. From the deep and aggressive front end, with its ground-hugging fascia and polished wire mesh grille, over 10-spoke alloy wheels measuring 18-inches up front and 19-inches in the rear, to an angular tail with prominent deck lid spoiler, it shouts “I am not just a luxury car” in a loud, clear voice.

A voice with the attention-getting rumble of a 4.4-liter supercharged 32-valve V8. This small-bore Northstar, Cadillac’s first supercharged V8, blasts-out 469 horsepower, that’s over 100 per liter, and 439 pound-feet of torque. That’s also 149 horses and 124 pound-feet more than a regular STS.

Those extra ponies gallop to the rear wheels by way of an all-new 6-speed automatic transmission. The driver can select regular or aggressive automatic shifts, as well as a sequential manual mode. 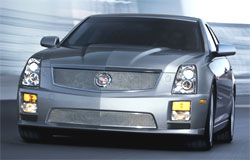 With the blower spinning, the STS-V hits 60 in only 4.8 seconds, and charges through the quarter mile in 13.5 seconds at a speed of 109 miles-per-hour. As with most supercharged V8s, there’s no shortage of pull across the rev band. The engine spins up smoothly with a wonderfully throaty exhaust note.

To make the best of the extra punch, the STS’s capable suspension has been firmed up with stiffer springs, thicker anti-roll bars, and faster steering. Like the CTS-V, much of the development work was done at Germany’s Nurbergring racing circuit.

While we didn’t go that far, we did put our STS-V on our favorite test track, Savannah, Georgia’s Roebling Road Raceway. Just like the CTS-V we drove here two years ago, the STS-V responds and turns sharply, although its extra weight tends to push the front down a bit harder. There’s also a bit more body roll, but it’s superbly controlled by the stiffer setup. Direction changes are like slicing, but we’d love to have even more feedback from the ZF variable-assist steering.

Brake feel, however, is first rate, thanks to big ABS-controlled Brembo discs with 4-piston calipers adapted from the CTS-V. Traction control and electronic stability control are well integrated. They deliver seamless assistance, but are programmed to still allow you to push the rear end out with the throttle if you want.

It’s clearly the most sporting STS ever. But while the CTS-V tackles tight corners in true sport sedan fashion, the STS-V is more suited to hammering out gently curving stretches of high speed highway. And it’s on wide open interstates and winding two lanes where this V really shines. The STS-V’s ride is super solid, but both comfortable and silent, while its combination of smooth handling and unlimited passing power allow you to quickly leave country lanes and tangled commuter traffic behind.

You will have to make a few stops for gas, however, since the STS-V is EPA rated at only 14 city/20 highway.

Between those stops, driver and passengers will enjoy a cabin that’s both luxurious and appropriately serious. The leather, wood and metal trim are modern and racy, befitting Cadillac’s freshened 21st century image.  And while it is all new, there’s plenty of traditional luxury and amenities. And it is an STS, so you also get a roomy rear seat and a big 13.8 cubic foot trunk.

But while the trunk is the same size as the standard STS, the price is a whole lot larger. Base sticker for the 2006 Cadillac STS-V is a hefty $77,090. That’s right up there in BMW 7-Series territory. But then the STS-V is even more exclusive as only about 2000 STS-Vs will go out the door this year. And that extra money buys you the most capable full size Cadillac that we’ve ever driven by a long shot. The 2006 Cadillac STS-V is one more powerful reason to see today’s Cadillac in a whole new high performance light.