To many, gasoline electric hybrid vehicles are our fuel-saving future. But when you say hybrid, most think of modestly priced vehicles like the Toyota Prius or Ford Escape hybrid. But luxury brand Lexus is about to change our value perception of hybrids with the new 2006 RX400h, the first hybrid luxury SUV. But will the greening of luxury also make us green with envy?

On the surface, the 2006 Lexus RX400h hybrid is the perfect fix for those guilt-ridden SUV drivers whose keeping-up-with-the Jones’ mentality has previously outweighed their environmental concerns. Nearly identical in appearance to the traditional RX330, the Hybrid shares the same basic dimensions, stance and athletically sleek, elegant looks. Differences are subtle and include new bumper and revised grille and fog lights. It also wears unique 18-inch alloys, and LED taillights around back. Oh, and we can’t forget to mention its new eco-friendly ‘‘h’’ in its name! Subtle yet telling. But rip off its metal skin and there’s no resemblance to any other luxury SUV. In fact, the RX400h is in a class of its own, blending full-time hybrid technology with performance and luxury.

Building on the Hybrid Synergy Drive concept used by parent Toyota for the Prius sedan, Lexus took the RX400h’s drivetrain to the next level. On the internal combustion engine side, a slightly detuned version of the RX330’s already ample V-6 is employed. Its output of 208 horsepower and 212 pound feet of torque is down about 10% from the 330. 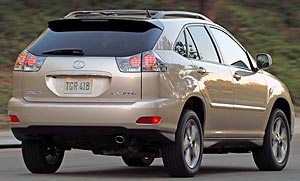 But thrust rises quickly to a combined 268 horsepower when linked to three electric motor generators. One acts as a starter, and can help charge the 288-volt nickel-metal-hydride battery pack. A larger 168-horsepower unit joins the V-6 in putting power to the front wheels, while a third electric motor drives the rear wheels. This not only gives the 400h standard all-wheel drive, but a boat load of gusto for any greenie.

In fact, the RX400h screams off the line. At launch, the electric motors provide instantaneously full power, with a preliminary 0 to 60 time of 7.0 seconds! Hey, who turned on the lights? That’s almost a second faster than the 330. No wonder Lexus is marketing the 400h as a total performance SUV. Indeed, on the twists and turns of the Hawaiian roads where we first drove the RX400h, it felt solid in corners, handling with confidence and modest body roll. The electric assist rack-and-pinion steering is vague but well weighted.

The RX400h also has an upgraded Vehicle Dynamic Integration Management (VDIM) system that tries to anticipate the onset of a skid or slide. Bringing the Lexus Luxo back to rest are ABS-equipped front and rear disc with regenerative brake system. Like other hybrids, in normal street stops the gas engine shuts down to save fuel. Electric power alone starts the 400h from rest, with the V-6 kicking in as needed. As a full-hybrid, the 400h can run on gas or electric alone, as well as any combination.

If the roads turn wet or rough, the RX400h’s innovative all-wheel drive system takes over. The 68-horsepower electric motor at the rear provides up to 650 pound-feet of additional torque to counter wheel slip.

Safe inside, changes from the RX330 are also minor. On the 400h, aluminum trim replaces the RX330’s wood decor and leather trim seats are a given. The tachometer is replaced with a Power Meter and a power usage display to monitor the hybrid system’s workings. The monitor can also be integrated into the optional DVD navigation system. The RX400h sports about $6,000 in features that are extra on the RX330. That includes a power tilt/telescoping steering wheel with memory, a power moon roof, power rear lift gate, and steerable Xenon headlights. A driver’s knee airbag, front side impact airbag, and front and rear curtain airbags are also standard. Options include a Mark Levinson audio system and rear seat DVD-entertainment.

And even with the battery pack under the rear seat, people and cargo room are unchanged. Luggage space remains at 38.3 cubic feet behind the split seat and 84.7 cubic feet with the seats folded.

But with all its high performance and upped standards, don’t think we’ve lost focus. While not as frugal on fuel as we might have hoped, we are still impressed with the Green Diva’s EPA rating of 31 City and 27 highway. That works out to be 38% better than the RX330 all-wheel drive. Expect everyday economy in the mid 20s. Also note that the RX400h is one of the first luxury vehicles to meet California’s strictest gasoline-engine emission standards.

Obviously, economy is not the only point of this hybrid. It’s also about providing the first upscale utility that’s easier on Mother Earth, without compromising luxury, comfort or performance. Indeed the Lexus RX400h is fast and frugal. And with 14,000 orders already on the books, it may sell out fast, too.