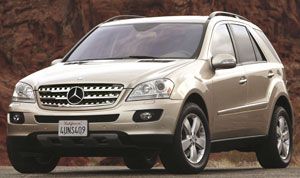 When it arrived for 1998, the Mercedes-Benz M-Class turned the SUV market on its ear. Here was a true luxury SUV from a true luxury car maker that was also built tough, and in America. The M-Class was an instant hit. But numerous newer luxury utilities have taken the shine off the M-Class, so it was clearly time for a redesign. But is this all-new M-Class still a leader, or now just a follower?

The M-Class started as a huge risk eight years ago. But, despite some early quality problems, it became the benchmark for the luxury utility class. It also prompted numerous mid-size rivals from other luxury car makers including the Acura MDX, BMW X5, and Porsche Cayenne.

The 2006 Mercedes-Benz M-Class is an all-out effort to raise that bar with a bigger, more muscular, more luxurious, but also much more contemporary design. That last point includes ditching the former body-on-frame architecture for a stiffer and lighter, if less rugged, unibody chassis, the kind favored by its major competitors. 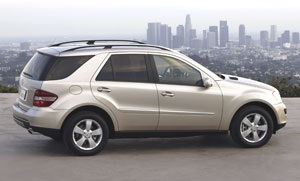 To defuse any thoughts of lost abilities, the body is brawnier in almost all directions. Wheelbase and track are up 4 inches and overall length by 6-inches. Only height is down, but by less than half an inch.

This beefier, if also sleeker, wedge has a wider grille, aluminum-look under-guard plates, more defined wheel housings, and flowing roof line, all ending with dual exhaust tips. Backing up the stronger appearance, M-Class also adds power. The ML350 sports a 3.5-liter, dual-overhead-cam V6. It pounds out 15% more horsepower at 268, and 258 pound-feet of torque.

The ML500 gets a 5-liter single-overhead-cam V8 with 302 horsepower, up 5%, and 339 pound-feet of torque. The transmission is an SUV-first seven-speed electronically-controlled automatic with manual-shift mode. It can skip a gear for best performance, and features an advanced lock-up clutch for maximum fuel efficiency. Maximum trailer tow weight is unchanged at 5,000 pounds.

The original M-Class 2-speed 4-wheel drive system has been replaced with automatic all-wheel drive, but it still uses traction control for seamless torque distribution. An “Off-Road” switch alters engine and braking for severe conditions. But the really tough stuff requires an optional off-road package that adds a high-low transfer case and center and rear locking differentials.

On-road at our track, our 350 jumped from 0 to 60 in only 7.2-seconds, and the quarter mile dropped away behind us in 15.4-seconds at 92 miles-per-hour. Pretty impressive for a 4,788 pound SUV! Handling, like acceleration, was smooth and steady. Turn-in was fairy crisp, with modest understeer, but grip levels were very high, thanks to the new suspension. It’s fully independent with coil-springs and stability control. For off-road, the optional Airmatic adjustable suspension can increase ground clearance to a tall 11.5-inches.

Braking is by 13-inch vented front discs and solid rears with ABS and brake assist. Stops were an acceptable 130 foot average from 60. Stability levels were high, with good feedback through the pedal. Whether on the open road or cruising the mall parking lot, the ML delivers a solid, comfortable ride with much lower levels of road noise. Overall refinement is much higher. 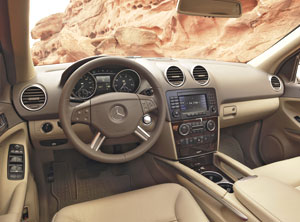 That also applies inside. Step-up is high, but the reward is a large, airy cabin, with clean, modern styling and now just two rows of seats. The new ML seats five, or four if no one wants to straddle the hump on the floor beneath the 60/40 split rear seat. And what happened to that available third row? Well, consumers didn’t want it, so Mercedes dropped it.

Something else is missing, too…the shift lever. No longer a fixture on the console, it’s been moved to the steering column; think 7-series. The tilt-telescoping multi-function steering wheel also houses manual shift buttons. The instrument panel is cleaner and sportier, fitting a more sophisticated image perfectly. But we could do without the super-hero-sized cupholders on the console. We’re just not that thirsty!

Safety features include front side and two-row curtain airbags, with accident-sensing Pre-Safe and whiplash-guard Neck-Pro systems optional. A fine sounding CD audio system with a factory installed satellite radio receiver is standard, and rear seat DVD entertainment is optional. Or wait for the dual-screen package to show up a bit later. Cargo space is slightly compromised by more people space, but still allows 72.4 cubic feet of flexible cargo room. A power liftgate and cargo management system are well-suited options.

Following its rivals, the new M-Class has added more car-like, customer-friendly features. Yet, true to the brand, its reach is also greater in luxury, comfort, safety, and on-road performance. Plus, rugged off-road hardware is still available for the few who really need it. In other words, the M-Class covers all the luxury utility bases and then some. So, we do think the 2006 Mercedes-Benz M-Class is once again the class leader. And even if the distance is less than the original, rivals will still be playing catch-up for years to come.