The Pontiac Solstice is the essence of the sports car dream. What started out as an auto show concept has now blossomed into a pure-at-heart, open-air, two-seat roadster reality. With a low-slung body, spirited performance, and modest price, the Solstice aims to steal more than a few hearts along the way.

While hardcore Pontiac fans have long enjoyed the brand’s hallmark big-bore pushrod power and boy-racer styling, the 2006 Solstice roadster takes driving excitement down a different road and to a whole new group of buyers.

Solstice is a new kind of Pontiac; the first two-seat roadster to ever wear their arrowhead badge, and GM’s first attempt to challenge Mazda’s successful MX-5 Miata sports car. And the Solstice is all-new from the pavement to the folding top. The Solstice is built on GM’s new rear-drive Kappa platform, which will be shared with the Saturn Sky roadster and a Europe-only ragtop from Opel. 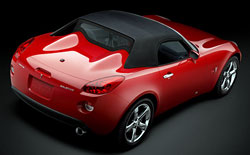 While the twin grilles, cat-eye headlights, and low set turn and fog lamps are Pontiac familiar, they’re set in a very rounded nose that, like the rest of the car, looks more Formula One than NASCAR. BMW-style short overhangs and a higher at the hip profile ride on a 95.1-inch wheelbase. That’s about 3 1/2 inches longer than an MX-5. The Euro-rear view includes an upswept lower fascia with high set taillights and low set chrome exhaust tip.

The folding soft top’s profile fits in very well with the Speed Racer styling. The top has a glass rear window with defroster. It unlocks easily and manually folds under a solid panel that is both the boot and trunk lid. Only modest effort is required, but you do have to get out of the car to open the panel. Once the top is dropped, the two-seat cockpit reveals itself to be as stylish as the exterior and surprisingly roomy. 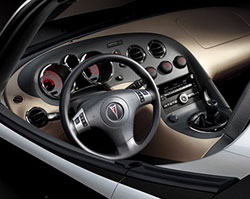 It’s all very driver-oriented with a sweeping aircraft-style instrument panel, very sensible and familiar control layout, and pedals arranged for heel-and-toe driving. There is a slick motorcycle-style gauge cluster, and front, but unfortunately no side-impact airbags.

The Ecotec engine’s 16-valve heads and twin balance shafts produce 177 horsepower and 166 pound-feet of torque. That’s 7 horsepower and 26 pound-feet more than an MX-5, but then the Solstice is about 400 pounds heavier. Still a 0-60 time of 7.2 seconds makes both cars an even match.

When working in combination with the responsive power rack-and-pinion steering, the Solstice exhibits quick corner entry with mild front push. The platform feels light and, with a near 50/50 front to rear weight distribution, very well balanced, very much like the MX-5.

Our pre-production test car felt tight and solid, with minimal chassis flex and body shake. It’s the best built Pontiac convertible that we’ve ever driven! And it’s frugal to drive, too. Fuel economy ratings are 20 City and 28 Highway.

And it’s even inexpensive to buy. Base price for the Solstice is $19,995. That’s a grand less than the cheapest MX-5. Pile on obvious options like air conditioning and ABS and you’re still under 25-grand.

The 2006 Solstice is not just another new Pontiac; it’s a whole new kind of Pontiac, and we loved it! Like the MX-5, the Solstice is a pure sports car, and a halo vehicle that could lead GM’s “excitement” division into a brighter and much more exciting future.