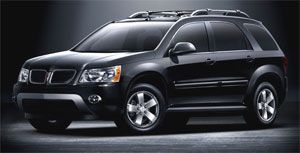 Pontiac was a pioneer in the mid-size crossover utility segment. However, the Aztek proved too controversial for wide acceptance. Now Pontiac is back with a new and far more handsome effort, the 2006 Torrent. It’s got all the right credentials: a car-like unibody chassis, powerful yet thrifty V6, and a roomy interior. But is that enough to outrun the shadow of Aztek?

Easily the most appealing crossover that Pontiac has yet launched, the new 2006 Torrent looks free to drive clear of any shadow of the past. While front-end styling favors both cars like the Pontiac G6 and the small Vibe crossover, the almost mid-size Torrent actually shares the same car-like unitized architecture as the Chevrolet Equinox and Saturn VUE.

With a substantial 112.5-inch wheelbase, longer than the Honda Pilot and Toyota Highlander by half a foot, the Torrent’s body, like Equinox, trades the VUE’s signature plastic body panels for sheet metal. To that Pontiac added fresh touches like their twin-port grille, unique 16- and 17-inch wheels, sharp monochromatic character, and lights, with standard roof rack rails, and rear spoiler. The long wheelbase provides a great ride over most any surface. The downside is a relatively wide turning diameter of 41.8 feet.

When it comes to power, Pontiac borrowed gusto straight from the Equinox. Packed with a 3.4-liter pushrod V-6, the Torrent smoothly churns out 185 horsepower and 210 pound-feet of torque. 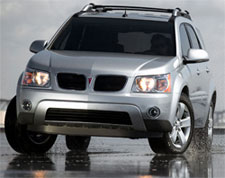 The standard layout is front-wheel drive with traction control, with a hydraulically coupled on-demand all-wheel drive system optional. The 5-speed automatic transmission has multiple shift schedules that adapt to varied load conditions. A combo that contributes to the Torrent’s meaningful 3,500-pound towing, and 1,290-pound payload capacities.

While we didn’t expect the Torrent to be a track star, it didn’t rain on its own parade either. We clocked a 0-60 of 7.9 seconds with the quarter mile ending in 16.3 seconds at 86 miles per hour. Overall that’s a bit quicker than the Equinox we tested last year, but with the same smooth shifting we praised in the Chevy. Appropriate since Torrent is considered the more sporting of GM’s car-based family utilities.  Support comes from a sport-tuned version of the Equinox MacPherson strut front end and four-link independent rear suspension.

And the wide-track Torrent does handle quite well. Despite moderate understeer and a fair bit of body roll, response and grip are entertaining. The electric power steering, while tuned for its new host, still has too little feel.

And reeling in the Torrent are standard four-channel anti-lock brakes with front discs and rear drums. Stops from 60 to 0 averaged a fine 124 feet. Pedal feel started soft but stiffened with increased runs and exhibited virtually no ABS pulse.

As to efficiency, EPA fuel economy estimates are sound at 19 city/24 highway for the front-drive Torrent, 18 and 23 with all-wheel drive. The Torrent provides more inside than its near Chevy twin. With chrome accents, Pontiac-signature red backlit gauges and switchgear, tailored materials, and a sporty Solstice-inspired tilt steering wheel. 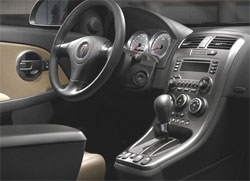 The versatile cabin is 5-big-adult roomy, offering loads of storage and standard equipment. Air, 6-speaker CD/MP3 stereo, and full power accessories are included. The window switches on the center console bothered some but not others. Safety is addressed with dual stage front airbags, and optional front side-impact and front/rear curtain airbags.

Like Equinox, extra long rear doors open to expose a split-folding rear bench that boasts 8-inches of fore-aft adjustments, as well as two-position recline. That frees up over 40 inches of rear leg room or an expanded cargo space of nearly 69 cubic feet, and that’s before you drop the fold-flat front passenger seat. And for even more cargo versatility there’s an adjustable rear shelf that allows two-tier loading.

And there are only two base prices. The front-wheel drive Torrent starts at $22,990. All-wheel-drive bumps it up to $24,890. Our full-up front-drive tester claimed $27,540 with upgraded audio, side airbags, and sunroof.

Pontiac would like everyone to forget the Aztek. Fortunately it only took a good design, some careful badge engineering, and not a witch doctor, to wipe our memories almost clean. Among a growing list of crossover utilities, Torrent stands out for its clever use of space, refined performance, good efficiency, and value pricing. It is a potion that’s sure to draw attention, but this time for all the right reasons.