Along with the Lexus RX-series, the Acura MDX has defined the modern, luxury SUV. Both are sharply styled, well appointed, and laden with technology, while still providing good all-weather utility. But with this second generation 2007 MDX, Acura is adding a lot more sporting character. And this new combination of plush and performance just might be a winner.

When the Acura MDX made its debut six years ago, it quickly became a luxury SUV star.  Its appeal, especially to the “family mom” who loved its comforts and ease of use, is without dispute.  But, Acura found that dads, while embracing the concept and style of the MDX, we’re less than fulfilled when driving it. There was just too little Sport in this sport-utility.  A short-fall that the all-new 2007 MDX aims to fix.

Atop Honda’s latest mid-size truck platform, the 7-seater MDX is hunkered down, lower, wider, and longer than its predecessor; with a 2-inch longer 108.3-inch wheelbase. But it is the edgy sheet metal with Stealth bomber-inspired angles that grants the new MDX a challenging presence.  The front fascia wears menacing headlamps and a gladiator’s shield for a grille. Details like a higher window beltline, upsized 18-inch wheels, hatch top spoiler, and dual exhaust, add to the undeniable air of a buffed sports sedan.

A look backed up with real muscle. MDX’s heart blood is pumped by Acura’s brawniest engine yet, a 3.7 liter single-cam variable-valve timing V6, yielding an even 300 horsepower and 275 pound-feet of torque. 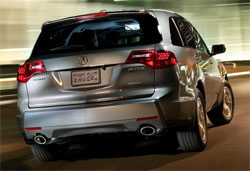 Our MDX barreled from 0-60 in 8.1 seconds. That’s comparable to a 6-cylinder BMW X5 3.0 I.  The MDX quarter mile tallied 16.4 seconds at 87 mile-per-hour.  Power feels even stronger than the numbers suggest, impressively linear, and without drama. The only transmission is a 5-speed automatic with manual mode. Shifts were quick and seamless.

Following the X5, and the Cadillac SRX, the MDX was ambitiously tuned on Germany’s infamous Nurburgring Racing Circuit.  A capable all-independent suspension with multi-links at the rear was a must.

But the ace in the hole for the MDX is Acura’s full-time Super Handling All-Wheel drive system. As on the RDX mini-UTE and RL flagship sedan, SH-AWD elevates cornering balance by shifting torque to the outside rear wheel to reduce understeer and push the MDX confidently through curves.  While no Nurburgring, laps at the Beaver Run Road course near Pittsburg confirmed to us that the MDX can keep pace with an X5 here too.

The standard stability control allows you good latitude before intervention, and is now sensitive to trailer towing whose limit grows to an even 5,000 pounds. An optional magnetic-fluid Active Damper system has driver selectable Sport and Comfort modes.

Braking is by way of all-disc with ABS, Electronic Brake-Force Distribution and Brake Assist.  Stops on our home track averaged a slightly long 134 feet from 60 to 0. 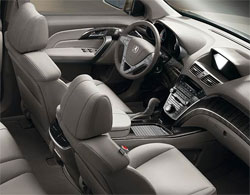 Expectedly, the sporting theme continues inside the cabin, with a dual cockpit layout that is both stylish and purposeful. The MDX’s 4+3 seating concept is defined by emphasizing comfort, support, and visibility for the most used front and outboard second row seats. Wood-tone surrounds serious gauges and a center stack that replicates the grille. An almost overwhelming number of switches controls a long list of standards including a 253-watt stereo and tri-zone climate control. Navigation with rear view camera, and a 410-watt 10-speaker stereo, are among the few major options.

Second row seating offers more overall room than before and grants a 60/40 split folding feature. Rear seat heat and rear DVD entertainment system are also available. Access to the two-youngster 50/50 folding third row is by way of the forward sliding second row seat.  It’s a squeeze but no worse than most minivans.

Activate Acura’s first powered tailgate for 15 cubic feet of storage behind the third row. That nearly triples when the third row is folded down, and grows to a very generous 83.5 cubic feet with the second row flat.

Now more than just a family provider, the 2007 Acura MDX has been spun into true a performance machine. With cutting-edge technology blended into the fold, this upgraded SUV pulls it off, successfully adding driving prowess without losing practicality. There is a possibility that the new MDX may be too sharp-edged for some moms, but with dads now on-board, it should only make Acura households happier.