We’re long-term fans of the Acura TL.  This entry-level sport-luxury sedan has always impressed us with its combination of performance, posh and price.  But as capable as the TL is, it lacks much of the sheer driving excitement of its German competitors.  So, to fill that void, Acura is re-introducing the athletic Type-S for 2007.  But can a harder hitting TL make a dent in its rivals’ appeal?

It’s refreshing to see a car company admit that they were wrong once in a while.  The return of the Acura TL Type-S for 2007 ends a three-year absence, and narrows the performance gap between a highly likeable sport-luxury sedan series and its more aggressively tuned German rivals.

And the ‘S’ in the Type-S clearly stands for ‘Sport,’ and means added gumption from the Acura RL’s 3.5 liter VTEC V-6. Output is a hearty 286 horsepower and 256 pound-feet of torque. That’s 28 more horses than the standard TL, and just shy of the BMW 3-series’ turbo-inline 6.

Front-wheel-drive delivery is from either the RL’s 5-speed automatic with paddle shifters, or a tightly space 6-speed manual transmission with delightfully short throws.  But, while the Type-S had plenty of punch, it was at launch that we experienced the most torque steer we’ve seen in years.  Hurdling over that nuisance, the Type-S needs only 5.8 seconds to scoot from 0 to 60.

A limited-slip differential is standard with the 6-speed manual.  And, along with traction control, they cut down on wheel spin at takeoff and in slick corners.  A revised double-wishbone system with stiffer solid anti-roll bar is up front, while a capable 5-link independent geometry is in the rear.

Swift and nimble, there is just a hint of understeer, and virtually no body roll, and stability control is there to bail you out if you push too far.  The careful retuning gives the sedan a sharper performance edge, but without forgetting ride comfort.  So, while still less capable than a rear-drive M-tuned BMW, it is also less harsh. 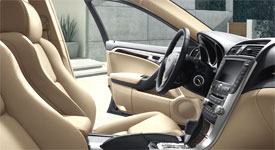 Step inside to a cabin that is very much a cockpit.  But with a swarm of look-a-like buttons, you may feel you need a co-pilot to fly this thing. Nevertheless, the dash and gauges are seamless, serious, and sophisticated.

The Type-S’ dark trim is fire-branded with red-gauge illumination instead of the TL’s blue.  The high-bolstered and embroidered leather, heated sport seats look race ready.

And no need to worry about options. The Type-S comes one way: loaded.  From an impressive DVD-Audio surround system to seat memory to navigation with rear-view camera and Acuralink Real-Time traffic.

The rear seat is really only made for a couple, and is roomier than a 3- or 5-Series BMW.  A lockable pass-through provides some cargo versatility, while the wide-but-shallow trunk makes room for an ample 12.5 cubic feet of luggage.

Government Fuel Economy ratings for the Type-S manual are a respectable 20 city/29 highway.  Our tester managed a combined loop of 22 miles-per-gallon on Premium gas. The Type-S has an Energy Impact Score of 14.3 barrels. That’s its total oil consumption for a year. Lower, and better than most rivals, it indicates Acura believes in responsible driving enthusiasm.

Pricing for the fully-equipped TL Type-S is very straightforward.  The base MSRP is $38,795.  Add $200 more for the summer performance tires.

With the return of the TL Type-S, Acura is not only serious about stalking its German sport sedan rivals, but those from Lexus and Infiniti as well.  It displays understated style, ready and willing power, and excellent balance and control from the chassis down to the tires.  The only question that still lingers is why did they get rid of the Type-S in the first place?