BMW has been building 3-series cars for over 30 years. And in all that time and through five generations, while the design has naturally changed a lot, the essence has not. The 3-series remains the benchmark sport sedan that all rivals strive to match. Now, for 2007, the 3-series throws its challengers a new curve, spooling up an unexpected twist to sensible performance.

BMW 3-Series fans are as loyal as any football fanatic or hockey hooligan, and the introduction of a new body style or engine to the lineup is always a time for celebration.

Well for 2007, BMW has delivered both:  a svelte new coupe body and under the hood of the 335i, a pair of dual vane turbos force-feeding a reworked aluminum 3-liter, direct injected inline 6.  This is the first gasoline turbo to wear a BMW badge in more than 20 years.

Track numbers for both body styles were nearly identical, as you would expect with only a 23-pound weight difference between them.  This 6-speed manual sedan spooled up to 60 mile-per-hour in a quick 5.3 seconds.  The quarter-mile pass ended in 13.7 seconds at 103 miles-per-hour.

A six-speed Steptronic automatic with paddle shifters moved our coupe tester through the same paces only a tenth slower.  For comparison, the 2006 330i needed 6.1 seconds for a 0-60 run. 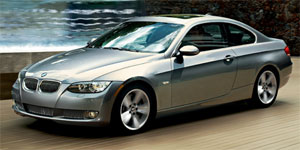 The fast styling of the new two-door fits the energy of this engine perfectly. It moves the traditional long, sleek proportions and bold character lines of past 3-Series coupes to a totally contemporary edge.  The power dome hood, sculpted front air dam, deep-set headlights, and kinked c-pillar set the coupe visually apart from the more conservative sedan. But both 335i’s have a pair of exhaust pipes sneaking out behind.

You do pay for the coupe’s showier look.  Interior functional differences include seating for only four, less headroom front and rear and a feeder arm that delivers the seatbelt to within reach of front occupants. Otherwise the interior is familiar 5th-generation 3-Series.  Burl walnut trim and a cabin that is more functional than fancy.  But enough static impressions. For a total feel of how the new turbo-6 adds to 3-Series performance, we took this rocket-red 335i sedan along on our winter sojourn to Savannah, Georgia’s Roebling Road Raceway. 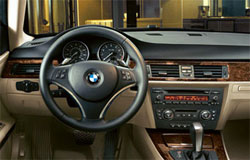 On the long drive south, we were impressed by both its power and its efficiency.  Government fuel economy ratings are 20 city and 29 highway. Between interstate fillups we beat that with 30 miles-per-gallon using premium gas.  The 335i earns a respectable energy impact score of 15.6 barrels per year.

Once at Roebling, the twin turbos provided plenty of punch for quick corner getaways and smooth power delivery to avoid those nasty mid-corner surprises you can get when a single-turbo engine comes on with a rush.

It mates well with an already superior responsive chassis. Both body styles use a double-pivot front and five-link rear suspension, a combination well-suited to this car’s near perfect front-to-rear weight distribution.

On the road course the chassis displayed predictable amounts of understeer, though it’s easily tamed with judicious use of the electronic throttle. And once we minimized its input, the dynamic stability control was for the most part unobtrusive, keeping us in check at the limit but allowing us a good bit of fun, too.

Suspension reaction is rapid in side-to-side transitions and steering inputs are translated very directly, but the car never felt darty.  We’re always amazed at how BMW can balance a tight, planted feel on the track with such a compliant and almost soft street ride.

With serious challengers from Infiniti, Lexus and Cadillac, pulling twin- turbo magic out of its 3-Series hat shows this icon will never rest on its laurels. And with the new coupe, a further energized sedan, and forthcoming hardtop convertible, it’s clearer than ever why the BMW 3-Series deserves such a loyal fan following.