Carroll Shelby and the Ford Mustang first got together in 1965 with the Shelby GT350. Adding teeth to Ford’s already popular Mustang made it an instant hit. The ante was upped in 1967 with the big block Shelby GT500, which cemented the Mustang’s muscle car fame once and for all.  Now, 40 years later, Shelby is adding even more muscle to that legend with the 2007 Ford Shelby GT500.  As the most powerful factory Mustang ever, it seems even hard to question, but is this new mix of man and steed another perfect match?

The combination of Mustang and Shelby has always produced serious performance. So the challenge for the designers of the 2007 Ford Shelby GT500 was to come up with an extraordinary car to further the Shelby legacy.

So starting with the rock-solid chassis of the current Mustang, Ford’s Special Vehicle Team, under the watchful eyes of Carroll Shelby himself, added a host of primo performance parts to make the GT500 the wildest production Mustang yet.

The heart of this stallion is a supercharged version of Ford’s 5.4-liter, or 330 cubic-inch, twin-cam V8.  It stomps out an even 500 horsepower with 480 pound-feet of torque. That peak power comes from the intercooled Roots-type supercharger that adds 8.5 pounds of boost, and high-flow cylinder heads borrowed from the exotic Ford GT.

To feed all that power to the fat rear tires, the GT500 dons a heavy duty 6-speed manual gearbox and clutch.  Which when launched under perfect conditions, will return a 0 to 60 time of 4.5 seconds, and quarter mile of 12.9 seconds at 112 miles per hour.

But, mix in a little moisture, and slow hookup and speed sapping wheelspin really hinders the launch. Still, we were impressed with the GT500’s broad power delivery and free-revving character, without any of the rough edges of classic Shelby Mustangs.

And in true muscle car tradition, the GT500 is no gas sipper. Still government fuel economy ratings of 13 city/21 highway, and a real world return of 17 miles-per-gallon using premium gas, are improvements over 60s-era muscle machines.

But there’s more to the GT500 than just a big V8.  Ford wanted the new car to be as quick in the corners as it is in the quarter mile, so SVT engineers retuned the shocks, springs and stabilizer bars. The 3-link Panhard rod rear suspension is derived from that of Ford Racing’s Mustang FR500C competition car. While the wheels are stout 18-inch alloys wearing 45-series front and 40-series rear performance tires.

Still, we found that the heavier powertrain contributed to a good bit of push in the tight corners of Summit Point Raceway’s quick Jefferson Circuit. But it vanishes mid-corner as you feed in power, giving the car a very balanced feel.

Long fast sweepers are where the GT500 is most at home.  The steering is quick with very good weight and feedback. And, even with a bit more body roll than we expected, it’s a definite step up in handling from the stock Mustang GT, but not quite the quantum leap that we expected given Shelby’s competition history.

The GT500 does stop like a race car however. Massive 14-inch Brembo cross-drilled rotors with 4-piston calipers up front, and 13-inch vented discs at the rear, haul it down from 60 in a short 121 feet. And maintain their awesome power and feel lap after lap.

The GT500 looks like a race car too, thanks to aggressive but not overdone styling cues.  Up front, the Shelby shows off a deeper fascia with blacked-out grilles and a functional air splitter.  While the pumped up hood, which features traditional Lemans stripes on the hardtop, has functional heat extractors near the leading edge. The tail stands tall with a vintage-style ducktail spoiler. And there are Shelby and Cobra badges galore including one that looks like the original’s gas cap. 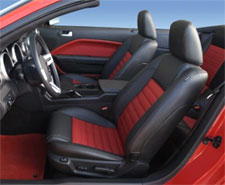 But the inside is a little on the plain side. It lacks the aggressive retro style of the exterior.  The leather seats boast increased lateral support for spirited driving and embossed Cobra logos, but only seats in red cars get color-keyed center panels. In the gauge cluster, the SVT-style speedometer and tach switch sides to help drivers keep an eye on their rpm.  And the three spoke steering wheel gets a Cobra badge as well. Otherwise, it’s straightforward Mustang twin-cockpit all the way. Not flashy, but clean and functional.

As you would expect given its Shelby breeding, the GT500 carries the highest stickers of any factory Mustang.  The GT500 coupe starts at $42,975, and the GT500 convertible at $47,800.  No if that’s too steep for your budget, then note that Ford has just announced that a retail version of the Shelby GT-Hertz built for rental will arrive soon.  Known as the Shelby GT, this 325-horsepower model should considerably undercut the GT500 in price.

It was 40 years between the original GT500 and the 2007 Ford Shelby GT500. Like the original, it takes a great car design and brings it to completion.  It is both impressively capable and amazingly refined.  And one that has earned the right to be a Shelby.