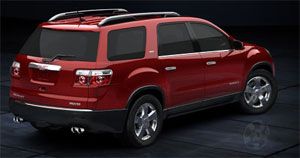 Up until now, when GM and all-other full-line car companies introduced multiple versions of the same vehicle design, the biggest difference was usually the name.  But in the case of the 2007 GMC Acadia, GM is trying to make such total badge engineering a thing of the past.

That said the unit-body Acadia does share the same chassis and virtually all unseen mechanical bits with the Saturn Outlook and the 2008 Buick Enclave.  This new Lambda architecture enables GMC’s first crossover utility to be configured for seven or eight passengers with standard third-row seating.

The front fenders, bumper and arched headlamps are also unique to Acadia.  The same goes for its rear fascia.  Acadia’s tapered roofline leads back to a traditional D-pillar, rather than the wrapped glass look on the Outlook.

And it plants itself atop large 18-inch alloy wheels.  More formidable 19 inchers are available. 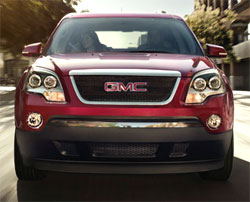 Unlike the Outlook’s two engine choices, the Acadia comes with only the more powerful dual exhaust version of GM’s 3.6 liter twin-cam V6. The same engine used in the Cadillac CTS and Seville.  It produces a hearty 275 horsepower and 251 pound-feet of torque at 3,200 rpms.  Harness that pulling power with the optional trailering package for a tow capacity of 4,500 pounds.

Tied to a new six-speed automatic transmission with manual shift mode, the Acadia is available in front- and all-wheel drive.  The AWD system utilizes a clutch pack to manage torque between the front and rear axles.

Government Fuel Economy ratings for the front-drive Acadia are 18 city/26 highway on regular gas. Expect 22 in normal driving. Acadia’s respectable Energy Impact Score of 16.3 barrels of oil per year is also about 15% better than a Yukon.

We first experienced the Acadia’s sedan-like handling on the twisty roads north of San Francisco.  Its compliant ride and stable handling is the effect of an all-independent suspension. Just as with the Outlook, the Acadia’s ease of maneuverability makes you forget that this is still an almost 17-foot long utility.

Electronic Stability Control with rollover mitigation and Traction control come standard, as do four-wheel ventilated disc brakes with ABS that arrests the 5,000 pound Acadia’s momentum. Stops were straight and secure, if not always as short as we think they should be. 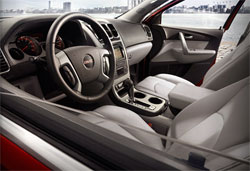 Inside, the Acadia is easily as refined as the Outlook, but, like the exterior, has a more robust, purposeful appearance. Uplevel trim is a metal-look rather than wood. The uniquely shaped center stack houses three center air vents, rather than the Outlook’s two.

Our SLT had comfy and supportive front seats. The steering wheel tilts and telescopes, and includes auxiliary controls. The center console’s sliding armrest is also a plus.

A head up display similar to the one found in the Chevrolet Corvette is an option exclusive to the Acadia. The second row comes as either a bench for three or captain’s chairs for two. GM’s Smart Slide feature, which worked smoother on this Acadia than on the Outlook we tested, allows easy access to a third row that’s even suitable for adults.

Cargo access is effortless if you order the power lift gate. Acadia’s max cargo room of 119.7 cubic feet slightly betters that of Outlook. There’s 19.7 cubic feet of storage behind the third row, an under floor bin, and cargo-bay audio controls – perfect for tailgate parties – which the Outlook lacks.

We think the design of the 2007 GMC Acadia goes far enough beyond the badge to attract a different core buyer than its Lambda stable mates. The Acadia is also everything a large CUV should be, and with its very own spin.