When Infiniti introduced the G35 sedan for 2003, it was something of an undefined quantity with an unremarkable pedigree. It was clearly a make or break product for Nissan’s struggling Infiniti brand. Well, the G35 ended Infiniti’s struggle quickly gaining ground as a top notch sports sedan, and a serious rival to the BMW’s 3-series. Now, only four years later, a completely revamped G35 is on the prowl, and its time for those comparisons to start again.

Building a car that can stand up to BMW’s formidable 3-Series is extremely difficult; but Infiniti engineers have proven that they can do it.  Like the original, the now wider, longer, and taller G35 is built on the 350Z’s rear-drive FM-platform. Completed updated, it’s 40% stiffer than before. Wheelbase is unchanged at 112.2-inches; 3 1/2-inches longer than a 3-Series.

The multi-link aluminum intensive suspension has been retuned, with additional upgrades for Sport. It’s available with Infiniti’s Four-Wheel Active Steer system, which changes the rear suspension geometry to match speed and steering input.  Seventeen-inch alloy wheels are standard. Eighteen-inchers are available, and standard with Sport trim like our test car. 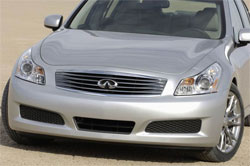 Power is up nicely, with the 3.5-liter dual-cam V6 now delivering 306 horsepower and 268 pound-feet of torque. That’s also 6 ponies more, but 32 pound-feet less, than the new 2007 3-Series 3.0-liter twin-turbo Inline-6. G35 gearboxes are a standard 5-speed automatic, with optional manual paddle shifters. Go for the Sport and you can opt for a 6-speed manual.

Our Sport, however, came with the automatic, and it still ran very well; 0 to 60 in 5.7 seconds. That’s a half second faster than the original G35.  The quarter mile clocked at an also very fine 14.2 seconds at 101 miles-per-hour.

The G35 jumps off the line, the refined V6 spinning freely. Pull is healthy throughout the power band, with the Sport’s limited slip diff ensuring good power put down. All shifts, auto or manual-mode, are sharp and clean. And the dual exhaust has a nice, aggressive note.

The G35’s beefed-up chassis and suspension were worth it. The already excellent handling is upgraded further. Our Sport turned in faster, with just a touch of front plow.  While the speed-sensitive steering doesn’t have BMW’s feedback, overall the chassis is well balanced, with little roll. So, while not quite as sharp as a 3-Series, the G35 is an excellent handling sedan.

Brakes are a close match too, 60 to 0 in 126 feet. While the pedal is spongy, with standard ABS and stability control, stops were very solid. As to our Sport’s ride, like a Euro-style sport sedan its firm but never rough. The standard car is similar but with a little less bump harshness.

As before, buyers can also opt for full-time all-wheel-drive, with the G35X model. Government fuel economy ratings are 19 city/26 highway. Our test of 22 miles-per-gallon on premium grade gas was about as expected. 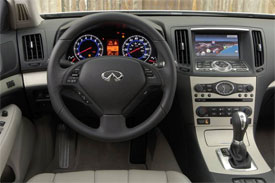 Inside, the look is clean, beautifully organized, and almost opulent. But lacks the distinctive, familiar character of its German rivals. However, and thankfully, there is nothing that resembles BMW’s iDrive. Safety features include front side impact airbags, and side curtain airbags for all outboard seats.

The 7-inch color monitor serves the optional Navigation system and back-up camera. As well as the standard audio system with in-dash CD changer and either XM or Sirius satellite radio. The rear seat offers plenty of head room, but typical of a driver’s car, is a little tight on the legs. The comfortable bench does not fold, but has a pass-through for skis. Trunk space is a very respectable 13.5 cubic-feet.

Pricing for the 2007 Infiniti G35 sedan was not available as we went to tape, but expect base stickers to start at about $32,000, and top out at about $35,000. Given its equipment and power, it will continue to be a value leader compared to the 3-Series.

The Infiniti G35 has gone from an unknown quantity, to a world class four-door, in almost record time. And while it may not yet convince many BMW fans to give up their car keys, it will convince anyone who drives it that the Infiniti brand is now a best bet when shopping for a serious sport sedan.