A lot of cats have wandered onto our parking lot over the years and generally they’ve been fairly tame. But recently, one very fierce feline followed us to our winter testing venue at Roebling Road Raceway near Savannah, Georgia. That cat is Jaguar’s new supercharged XKR. With its claws extended and its back arched high, this kitty came ready to play and lap up some Georgia asphalt.

Though our first outing in the 2007 Jaguar XKR was on the back roads of Southern Spain, it was in Savannah, Georgia where we really got to know this ultra-performance version of the XK coupe. There’s nothing like a ten-turn, two-mile road course to put a supercharged 2+2 through its paces.

Even though the XKR is more GT than pure sports car, it seldom rebelled. The harder we pushed, the better we liked it.  A stiff all-aluminum chassis is a core reason for its track prowess.  Add to that firmer springs and dampers, and thicker anti-roll bars to scratch-out superior agility from lap to lap.

A recalibrated CATS active suspension system enhances both handling and ride. Even when running full tilt, there was a high level of driver confidence.  Dynamic Stability Control is standard, but we switched it off to really run the XKR to the edge its abilities.

It’s extremely capable through even the tightest of corners.  The variable ratio, electro-hydraulic steering is both weighty and direct. There is progressive understeer and modest body roll, but nothing to throw off your concentration. 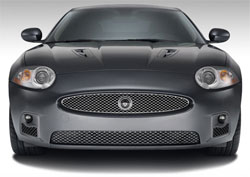 Touted by Jaguar as being an XK plus 30%, the front-engine rear-drive XKR gets its long legs from a 4.2-liter double-overhead-cam supercharged V8. Output is 420 horsepower, up 120 from the XK, with a truck-like 413 pound-feet of torque.

When we hit the start button at our home drag strip, our XKR fired from 0 to 60 in a quick 5.3 seconds, knocking more than a second off our XK times. It then sprinted the quarter-mile in 13.7 seconds at 109 miles-per-hour.  There’s plenty of power at launch, and a quick, smooth build after that. For the record, the XKR is electronically limited to 155.

Power feeds aft to a six-speed automatic with Sequential Shift.  Manual mode is by way of steering wheel-mounted paddle-shifters. Gears are tight and have a good “snap” to them without being harsh. Upsized ventilated disc brakes match the XKR’s added power.  ABS, Electronic Brake Force Distribution and Brake Assist fortify its ability to stop in a short 115 feet from 60 to 0.

Available in both coupe and convertible, the XKR starts with the eye catching, powerful lines of the XK.  From front to back, this all-aluminum GT sculpted figure broods dynamism and sophistication all at once.  Indeed the differences in appearance from the XK are in the details.  These include hood louvers and an “R”-type signature chain-mail grille up front.  Chrome side vent trim also helps telegraph the XKR’s performance intentions, and the wide rear fascia finishes off with great sounding chrome quad exhausts.

Inside, the XKR’s cabin is expectedly plush, with plenty of soft grain leather, yet it’s direct and less eclectic than older Jags. Ergonomics is the new king here. The elegant dash trimmed with optional wood is home to large, round instrumentation with a digital message center. While a seven-inch touch screen in the center stack accesses audio, climate, and navigation.

In terms of efficiency, the XKR actually does well for a high-performance car.  Government Fuel Economy ratings are 17 city/25 highway.  Our tester managed 20 miles-per-gallon. on premium gas.  The XKR scores a reasonable Energy Impact Score of 17.1 barrels of oil per year.

The 2007 Jaguar XKR is as serious an animal as one can hope to manhandle, while still delivering top-notch comfort.  Taking the already capable XK up more than few rungs puts Jaguar back in the mix with many the most desirable performance automobiles in the world. Although we already had a hunch that this was true, a few days on at Roebling showed us just how ferocious this wild cat could be.