When we get set for our annual winter pilgrimage to Roebling Road Raceway near Savannah, Georgia, the first task is to find the right cars. So when the Lotus Exige S showed up on our radar, we knew it had to make the cut. With a roots type supercharger and only 2,100 pounds of mass, the Exige S seems like the perfect track car.

There is no denying the racy appeal of the 2007 Lotus Exige S.  Even parked, it looks like a track star waiting for the starting gun.  Its deeply carved and sharply V-ed front, impossibly short overhangs, boy-racer wing and top-mounted air snorkel all indicate a machine built with one purpose in mind:  To get to the next corner first!

Backing up its brash looks, the Exige S carries a Toyota 1.8 liter twincam four shared with the Exige coupe and Elise roadster.  But the S ups the ante with an intercooled supercharger package from the limited issue Lotus Sport Exige 240R. In the “S” it boosts horsepower 30 to 220, and torque to 165 pound-feet, with a lofty 8,000 rpm redline. 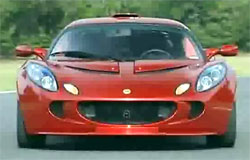 The Exige’s bare extruded aluminum chassis weighs just 150 pounds and the whole car tips the scales at 2,077, giving a power to weight ratio of only 9.4 pounds per horsepower.

For a little “S” perspective, the Porsche Cayman S pushes 10 pounds with each of its 295 ponies and the new Mini Cooper S drags around 15 pounds per horse.

Inside the tight Exige cockpit - and good luck getting in gracefully, by the way – the weight savings are obvious as not one scrap of material has been wasted.

Foot pedals are tightly spaced but precise in operation. The bare aluminum shift knob connects to a close-ratio 6-speed gearbox, and typical of Lotus, the action is a bit clunky, but it does get the job done. The inside mirror, on the other hand, is absolutely useless unless you want to keep an eye on the engine.

But in a car this fun, we’d rather keep our eyes on the road ahead, especially the ten fast turns of Roebling Road – because this is where Lotus founder Colin Chapman’s guiding principle of simplicity and light weight shows its true genius.

The Exige S tackles the track with gusto, showing near-perfect balance and tons of grip from its sticky 17-inch competition tires.  The racing-inspired aerodynamics package:  Wing, air diffusers and flat bottom, generates 100 pounds of down force at 100 miles-per-hour.
Slowing from those speeds is no problem, thanks to four-wheel vented discs and standard ABS.  Body roll is moderate, while the firm steering is very direct and delivers great feedback.

Power delivery matches the abilities of the chassis, it’s always there when you want it, but is never overwhelming.  Where the Exige loses ground to other sports cars, though, is in long straight-aways, where horsepower equals speed.

In the same track session for instance, the aforementioned GT500 was easily 15 miles-per-hour faster on the straights, and clocked lap times a half second quicker than the Lotus, despite weighing almost twice as much.

Still, demanding little more of the driver than quick reflexes and a willing right foot, there is simply no other mid-engined car that is easier to drive at the limit.

The Exige performs well on the street, too.  Despite its short wheelbase, the ride quality is as comfortable as many small commuter cars.  Government fuel economy ratings are a respectable 23 in the city and 29 on the highway using regular gas.

The only disappointment in our drive was the flat, buzzy exhaust note, dominated by the whining of the supercharger. We’d gladly live with that though, if we could come up with the $56,990 price of admission. That may be a lot to pay for what is essentially a weekend warrior.

But one drive in the Lotus Exige S will tell you:  It’s pound for pound, the biggest little thrill ride around!