Up until a few years ago, a Mercedes-Benz wearing the AMG badge was both fairly rare and very pricey. Then Mercedes, intent on expanding the influence of its in-house tuner, began to give all of its vehicles the AMG treatment. And trying to make great vehicles even greater is what we have in this week's test of the CLK63 AMG Convertible, and this ML63 AMG Utility. They're still pricey. But then, the best things usually are.

Known for turning luxury into lightning-fast, AMG has been super-tuning Mercedes-Benz engines for nearly four decades. The self-contained super-performance group has now installed their first from-the-ground up powerplant in two most recent entries, the 2007 ML63 AMG sport-utility, and CLK63 AMG Cabriolet.

With the Porsche Cayenne Turbo in its crosshairs, the ML63 shoots from 0 to 60 in 5.3 seconds, and lit up the quarter mile in 13.6 seconds at 108 mph. Power barrels through AMG's Speedshift 7G-Tronic seven-speed automatic transmission with three shift modes - Sport, Comfort, or Manual. Driver gear changes by steering wheel buttons or gear shift allow total use of the prodigious engine torque. 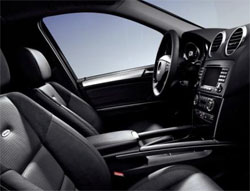 Permanent all-wheel drive with center differential fed our tester's available 20 inch alloy wheels. Compared to the standard ML, and more in keeping with its hot rod abilities, normal torque split is biased more towards the back wheels with a 40% front/60% rear split.

Inside, you'll find exactly what you'd expect from AMG -- an ultra upscale, sport-oriented cabin. Amenities range from chunky Nappa leather sport seats with contrasting inserts, to a NAV system, to a barrage of safety systems. With good rear seat and cargo room, the ML63 is ideal for picking up the kids, the groceries, and whatever else, all in record time.

But, now let's try stuffing the same thunderous V8 and manual-matic into an already delicious convertible. That dynamo is the super-sexy, super fast CLK63 AMG Cabriolet.

AMG badging and a new front apron with side air vents initiates the head-turning body kit. While an insulated all-season power soft-top underscores the CLK63's obvious appeal that broods dynamism from front to back.

Electronically limited to 155, the CLK63 romps from 0 to 60 in 4.9 seconds. That's three-tenths quicker than the CLK55 we tested two years ago -- and rips the quarter mile a half second faster at 13.2 seconds and 112 miles per hour.

Atop 18 inch wheels, AMG's latest sport suspension ambitiously manages all of this power. A 3-link geometry up front, and five-arm multilinks in the rear, are enhanced with AMG configured dampers, springs, and stability control. The result is exceptional control on virtually any road exercise. The speed sensitive steering is quick and precise. The CLK63 also makes sure-fire stops in 126 feet from 60 to 0 by way of cross-drilled ventilated 4-wheel disc brakes.

The interior is aggressive sport and premium luxury rolled into one. Packed with a roster of high-end features like Harman Kardon audio, and an effective wind blocker, it's most valuable interior aspect is still its ability to carry four people plus cargo at ridiculous speeds.

But rocket ships seldom do well at the pump. ML63's Government Fuel Economy ratings are 12 city/16 highway with our loop of 12 miles-per-gallon on premium gas. The CLK63 does better at 13 city/20 highway. We averaged 17 miles-per-gallon.

And, since not all of the best things in life are free, brace yourself for the real stingers. The ML63 AMG base price is $86,275. The CLK63 AMG Cabriolet rings in at $92,575 with the gas guzzler tax included.

Both the 2007 ML63 AMG and the CLK63 AMG Cabriolet are further testaments to AMG's abilities. Setting world-class standards for performance and luxury is their cornerstone, giving AMG enthusiasts exactly what they've paid for: world-class exhilaration.