When BMW took the wraps off the second generation MINI Cooper, the press and public alike sounded a sigh of relief. Though slightly larger, designers concentrated on improving rather than changing this modern icon. The old world MINI look remains pleasantly intact.  In fact it’s about as close to natural evolution as a car can get.

The MINI Cooper is every bit a coming-of-age cultural phenom as say, Volkswagen’s Beetle. A British-borne classic of the 60’s, the sporty Cooper and Cooper S started out as successful rally cars racers and grew to become worldwide motoring icons.

With Germans now at the helm, the BMW-designed, but still British-built, “new’ MINI Cooper was re-borne in 2001 to a fresh youthful following.  So, mindful of its loyalists, it’s now evolved to a second generation 2007 model with subtlety and tact. 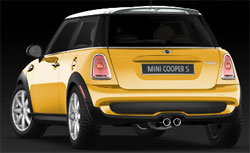 That subtlety is most evident in the ultra-compact Cooper’s barely-changed exterior design, with the same cute and vintage body styling that grabbed our attention in the first place.

Differences are in the details. The familiar round headlamp now house the turn signals and are no longer a part of the clamshell hood.  The mouth-shaped grille is larger and features a black mesh treatment on the sportier Cooper S.

An elevated window beltline makes for a more taut and powerful side profile.
And out back, the tail lamps and bumpers are re-styled and more distinctive.  The Cooper S retains its dual, center-mounted exhaust.

Inside, change is far more noticeable, but the essence of the cabin is still the quirky blend of old-world aesthetics and new-age technology. 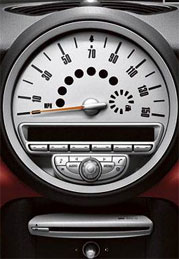 Just about every other interior aspect is larger too. The brighter, reshaped dash allows more front legroom, but the driver’s foot-well is still tight. The seats have more support, and the steering wheel now tilts and telescopes.

There is a bit more comfort in 50/50 split-folding rear seat too with added knee room. With both sides down, you’ll have 24-cubic feet of stuff space.

The Cooper S is now turbocharged, instead of supercharged, for better efficiency.  This 1.6-liter, with common rail direct injection yields 172 horsepower, up 4, with 177 pound-feet of torque, a nice gain of 22.

The turbo is not as responsive off the line as the supercharged engine, but mid-range passing power is smoother and more eager. Still the factory 0-60 time is little changed at 6.7 seconds.

Both engines are tied to either a 6-speed manual or automatic gearbox.  The Cooper S automatic includes a manual “sport” mode and steering-wheel paddle shifters.

Most of our time was spent behind the wheel of a Cooper S touring the Spanish countryside.  The revised combo of front McPherson struts, multi-link rear, and run-flat tires, results in a less harsh ride, although with the Sport Package it’s still quite stiff. For best ride comfort the almost too soft Cooper will appeal more.

And as to fuel economy, the MINI lives up to being super-small.  Government Fuel Economy Ratings for the Cooper automatic are 32 city/40 highway, while the Cooper S manual rates 29 city/36 highway.  Their fine Energy Impact Scores are 10.4 and 10.7 barrels of oil, respectively.

BMW has handled the new generation of the MINI Cooper with a gentle hand.  Massaging it mildly with thoughtful improvements, and making it an even better driver’s car without any jarring changes.  MINI fans can relax now – their cute little cult-car may have been upgraded, but it’s still totally MINI.