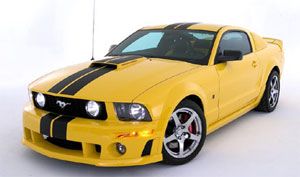 No doubt you’ve heard us gush about Roush performance efforts, and anything Mustang, more times than you can count. And we think that’s just fine, especially when you put them together and a Roush-tuned Mustang crosses our path. With race-car blood coursing through its automotive veins, we found the latest Roush Stage 3 Mustang is the real deal.

If there are two things that the folks at Roush Performance know how to pull out of car, it’s horsepower and handling. And the 2007 Roush Stage 3 Mustang delivers train loads of both. 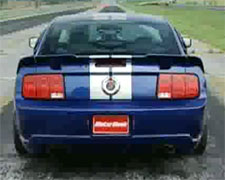 So it all looks good on the spec sheet, but how does it on real pavement? Well we hit the gas at our test track and saw 60 in 5.1 seconds. The quarter mile ended in 13.6 seconds at 107 miles-per-hour, again, between the results of the GT and the Shelby GT 500.

And while the stiff clutch offers tons of feedback, giving us the control needed for smooth, clean launches, it’s when the freight train engine roars into higher revs that the Stage 3 really comes into its own edgy personality.

Add in a throaty high-flow exhaust note and distinct supercharger whine, and the Stage 3 proves a delight to all a car fan’s senses. And that’s before it ever turns a corner. But it does, at West Virginia’s Summit Point Raceway, where the Stage 3 lives up to the Roush reputation by delivering handling light years above the GT and with more of a racer-feel than the Shelby GT 500.

Direction changes are quick and effortless, with just a touch of front-end push at mid-corner, less than the Shelby. The retuned suspension delivers superb feedback, and nearly flat cornering. In fact, the balance of power and grip is so spot-on that you have to work pretty hard to make the rear tires break loose.

Little effort is required for great braking too, as the ABS-equipped big discs bring the car down from 60 in a short average of 119 feet. There’s plenty of feel through the firm pedal, and rock solid stability even when you punch them hard in a panic.

While the Stage 3 feels more secure than the GT 500 on the track, its firmer setup makes it less comfortable on the streets. It’s a little noisier, and rides rougher. But it’s still very strong, rocking easily through traffic, and passing anything rolling with just a nudge of the gas pedal.

We found overall performance to be very impressive. But, a little extra pose doesn’t hurt either, so Roush equipped the Stage 3 with an aggressive 7-piece body kit that makes Mustang styling even more of a head turner.

With its revised front fascia and deeper chin spoiler - vintage-style hood scoop and optional racing stripes - and tall duck-tail spoiler, the Stage 3 will stand out at any pony-car gathering. 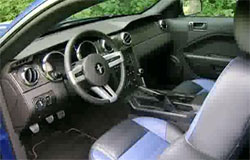 Interior trim hasn’t been forgotten either, with our test car sporting standard two-tone leather seating that’s color-matched to the body, and features Stage 3 embroidered logos. Plus Roush white-face gauges, aluminum pedals, and custom floor mats. You can also add an optional carbon trim kit to the dash and doors.  And even an official Roush tool kit to fill out the trunk.

The Stage 3 treatment adds $21,000 to the price of a Mustang GT for a base of $47,370. While that big sticker is more than a Shelby GT 500, Roush has other Mustang packages for less, including the 427R that still includes the supercharged V8.

The 2007 Roush Stage 3 Mustang delivers a competition street-car persona that is a definite rush. And, that big money buys you big performance from one of the biggest names in modern American muscle.