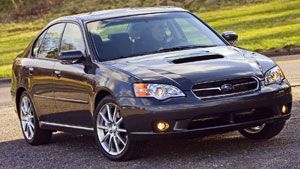 Until a few years ago, most Americans never thought of all-wheel drive expert Subaru as a performance company. But their global road rally racing success, and cars like the competition inspired Impreza WRX and WRX STI, changed all that. Now Subaru is trying to work a little hot shoe magic on their largest sedan with the legacy 2.5GT spec.B.

After introducing the mid-size Legacy 2.5GT spec.B in 2006 with an ultra-limited production run of only 500 units, Subaru provides the now widely available 2007 effort with some key additions.

Those additions start with the powertrain. Still forming the base is a 2.5 liter twin-cam turbocharged and intercooled 4-cylinder Boxer engine with variable valve timing. Its 243 horsepower and 241 pound-feet of torque is certainly competitive with the BMW 3-series and the Audi A4. And that’s before replacing last year’s 5-speed manual transmission with a modified version of the 6-speed manual from the WRX STI.

Sport Sharp mode provides the quickest response and more power sooner, so it was our obvious track choice as we smoothly scooted from 0-60 in 6.2 seconds. Our spec.B then sprinted the quarter mile in 14.5 seconds at 96 miles per hour. That’s pretty much a draw with the BMW 330i.

Newly added stability control, and a Torsen limited-slip rear differential, further regulate this four door’s surefootedness both on the straight, and more importantly through the curves.

For, it is in handling hardware where this car really shines. The ‘B’ in spec.B is a stiffer Bilstein Sport Suspension with inverted front struts and aluminum intensive components.  Similar to the setup on the WRX STI, it grants a more consistent driving experience during hard cornering with a near neutral response, unusual for any all-wheel drive car.

Braking is all-disc, with ABS and Electronic Brake-force Distribution.  Smooth and straight, 122 feet was our good average from 60 to 0.

Clearly the spec.B is road and track capable. But you wouldn’t know from just looking at it. Unlike the more flamboyant WRX STI, the spec.B is styled to keep its sporty attributes at a very low key. The hood scoop and rocker moldings hint at its performance, but there is little else that shouts track star. Only the standard 18 inch, 10-spoke alloy wheels, and summer performance tires, point to the car’s true abilities. Staying with the understated theme, the well-appointed interior offers a familiar driver-centric cabin. 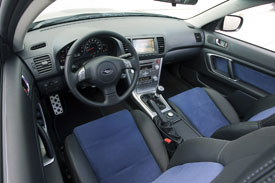 But, there are hints this Legacy is something special, like new eye-catching charcoal grey leather bucket seats with Alcantara blue inserts.  The 3-spoke MOMO leather-wrapped steering wheel, and aluminum pedal covers, are also flashy giveaways.

And, the spec.B comes virtually one way: loaded, including dual-zone climate control, 6 disc in-dash CD stereo with auxiliary audio jack, and even a navigation system.

This is a practical sport sedan, however, so safety is full tilt with front side impact and two—row curtain airbags, and a new tire pressure monitoring system.

The rear seat is tight for three, but fine for two. Its 60/40 split folding design adds versatility to a sufficient trunk with 11.4 cubic feet of space. The spec.B even has reasonable government fuel economy ratings of 19 city/26 highway. We managed 19 miles-per-gallon on premium gas.

Pricing for the Legacy spec.B is also premium, $34,620.  Though fantastically well-equipped, some may still be shocked at that kind of sticker on a 4-cylinder Legacy.

Having staked a claim to edgy performance with the Impreza WRX and WRX STI, Subaru has now fast-tracked its Legacy sedan. But, the 2007 Legacy 2.5GT spec.B is a more grown up attempt at attracting road rally fans, as well as mainstream buyers shopping for a well-appointed sedan with some real kick.  As long as they can overlook the Subaru logo when they see the bottom line, the spec.B has all the makings of a solid sport sedan success.