Toyota has been nibbling around the edges of the full-size pickup market for well over a decade. First with the T-100, and then the Tundra, they always came off as “almost full-size” pickups, and were barely noticed by the boys in Detroit. But that may change. The all-new, second-generation Tundra beams with bigger dimensions, brood-force specs, and a built-in-Texas attitude. Looking ready and able to go for the center of the American pick-em-up-truck pie.

Detroit automakers are known throughout the world for their big, bad, full-size pickup trucks. And, despite volatile gas prices, the full-size pickup remains the top-selling vehicle type in the land. And the all-new San Antonio-built 2007 Toyota Tundra certainly looks like a new member of the club.

That look is huge, mixing Toyota’s own design cues with a few borrowed from the Dodge Ram and Ford F-150. A big-rig hood and chrome-framed grille rise above the fenders for the look of a battering “Ram.” Trim levels are familiar: base, SR5, and Limited.

More rounded wheel arches and accentuated fender blisters make room for larger 18-inch wheels that can be kicked up to a set of 20 inchers in Limited trim.

Sculpted cargo-box sides give the Tundra a pinched-waist look, while the bolted-to-the-frame bed floor, which the first Tundra also used, is right out of the F-150’s play book. 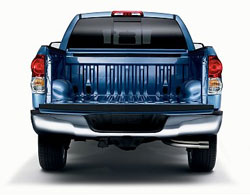 And, like the F-150, you can have the Tundra any way you want it. With three bed lengths, 5 ½ foot, 6 ½ foot, and 8-foot, three cab styles, Regular Cab, an extended DoubleCab, and Crewcab CrewMax, the Tundra is available in 31 different configurations.

Cargo boxes are as deepest as any, with 50-inches between the wheel wells, and can be ordered with adjustable tie-down rails. Maximum payload is 2,060 pounds, made easier by a gas-strut-assisted tailgate.

But, we think the 5.7 V8 will prove rather popular due to strong Government Fuel Economy ratings of 16 city/20 highway on regular gas. That’s better that most rivals, but lower than the new Chevrolet Silverado.

The 5.7 will have help, attached to a segment-leading 6-speed automatic with manual shift and tow-haul mode, and it does deliver a best-in-class maximum tow rating of 10,800 pounds. Other engines fit a 5-speed automatic, and all-three engines are available with a part-time, shift-on-the-fly high/low four-wheel-drive system. A TRD off-road suspension with Bilstein shocks is also available.

Tundra’s new frame comes in three wheelbases, again comparable to the F-150, and, while more rigid than its predecessor, is not fully boxed like rivals, including the Nissan Titan.

Suspension says big truck, too, with double A-arms and coil springs up front, and a live axle at the rear. The rear shocks are mounted outside the springs for improved lateral stability.

Tundra sets a new benchmark in standard brakes and driving aids. ABS controls the largest front discs in the class, and both front and rear discs are ventilated to minimize fade. Brake Assist is included, as is Vehicle Stability Control, Traction Control, and even an automatic limited-slip rear differential.

We’ve driven a variety of new Tundras, but spend most of our time in a four-door Double Cab Long Bed 4X4. Unlike most extended cabs, the Double Cab’s shortened rear doors are hinged at the front. They do open 80-degrees for reasonably easy loading. 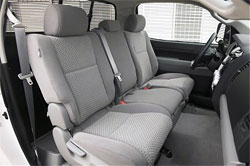 Behind the front doors is a wide, tall, handsome cabin, which even on our mid-level SR5 was richly trimmed. The well-organized dash has large gauges, driver-oriented switchgear, including transmission gear shift, multiple power outlets, and two glove boxes. Upgrades include a JBL stereo and available DVD navigation with rear-view camera.

A 3-passenger, 40/20/40 front seat is standard on trims except Limited that gets bucket seats. Our SR5 had the buckets with heat as an option, and they include laptop-size center console storage. The 60/40 split-folding rear seats in the DoubleCab are adequate for short trips. The roomier CrewMax is the first pickup with rear seats that slide, and has a power-down rear window.

And everyone is well protected, with front-seat side-impact airbags, front- and rear-curtain airbags, with rollover sensing and tire pressure monitoring.

Driving over a variety of roads, we found the new Tundra’s ride very much like its predecessor: solid, comfortable, and extremely quiet. Outward visibility is excellent, and the tuning diameter on most models is reduced for more agility.

Pricing was not available before we had to go to tape, but like everything else on the new Tundra, expect it to go toe-to-toe with its Detroit rivals.

While it breaks little new ground, the all-new 2007 Tundra proves the old saying that “...three’s a charm.” Toyota’s third try has yielded a true full-size pickup that challenges all comers in size, power, comfort, and payload. It will undoubtedly do better than the previous model, and with heavy duty and diesel models on the horizon, this Tundra should cement Toyota’s big-truck image once and for all.