The old cliché is work hard your whole life, then retire and play some golf. But it seems like Volkswagen has got it backwards. Trying to score higher sales, VW America has retired their Golf nameplate and brought back a classic to fill its shoes, the Rabbit. First introduced in 1974, Rabbit hatchbacks turned VW from a bug builder into a benchmark small car company. So let’s see if this new bunny can hop down that trail again.

Long before the days of Fahrvergnügen, Volkswagen had high hopes for its hip, fuel-sipping little Rabbit.  But the hare stopped hopping in 1984 after being succeeded by the Golf.  Now, for 2007, the iconic Rabbit returns to reclaim its young audience with an abundance of new zeal and appeal.  And its cute name, too.

Under its hide is a fifth generation Golf. And the German-built Rabbit is available as a 2- or 4-door hatchback. Its stiffer platform is shared with the Volkswagen Jetta, giving the Rabbit a wheelbase of 101.5 inches and a trim nose to tail length of 165.8 inches. 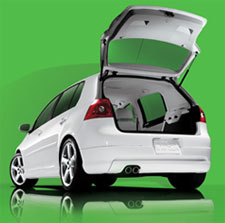 But the Rabbit’s stance is wide and substantial for a compact.  A thick back-end, rear spoiler and dual exhaust grant an air of zip and athleticism. Under the hood, energy reels from the Jetta’s 2.5 liter twin-cam, 20-valve inline 5 engine.  It spits out 150 horsepower. That’s a jump of 35 over the last Golf. And peak pulling power of 170 pound-feet of torque is on tap from 1,750 rpm up.

The front-wheel drive Rabbit channels power through either a 5-speed manual or our tester’s 6-speed Tiptronic automatic transmission with ‘Sport’ Mode.

On the track, our Rabbit was no scalded hare, yet still scooted from 0-60 in a respectable 8.8 seconds. The quarter mile clocked in at 16.7 seconds at 84 miles per hour. The engine has a nice low-end punch, but power delivery builds conservatively from there.  Though smooth, our 6-speed auto was in no particular hurry to up shift beyond 2nd gear.

With similar tuning as the Jetta, handling is by MacPherson struts up front and multi-links in the rear. The Rabbit also enjoys standard electro-mechanical steering system, traction control, and optional Electronic Stabilization Program. All of this equals a well-balanced and nimble feel, even with more body roll than expected.

Braking is by 4-wheel discs with ABS. However, stops from 60 to 0 averaged a slightly long 130 feet. And despite a gaping hole for the hatch, the Rabbit’s structure is tight and solid.

Holding up to the original Rabbit’s cost-consciousness, government fuel economy ratings are 22 city/30 highway for the automatic.  Our tester’s combined test loop was a middling 25 miles-per-gallon on regular gas. 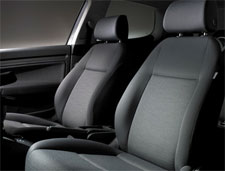 Rear seat accommodations are comfortable for two, but tight for three.  A 60/40 split fold is joined by a center armrest and pass-through. The rear hatch opens to 15 cubic feet of luggage space. But true to VW form, folding the Rabbits rear seats opens a huge burrow of 46 cubic feet. The 4-door’s folding front passenger seat provides SUV-like cargo capabilities.

So after more than two decades, the “wascally wabbit” has returned to woo a whole new generation of Volkswageneers.  Affordable, fun, and with a way cool name, the new 2007 Volkswagen Rabbit may very well prove to be a hare beyond compare.