After years of trying to build a top notch luxury sport sedan, Cadillac scored a breakthrough with the 2003 CTS.  But not only did the CTS prove that Cadillac could build a driver’s car, and sell it in volume, it proved that the venerable American brand could hold its own road against global stalwarts BMW and Mercedes. But time and great car great design march quickly on, and an all-new CTS is ready.  So let’s roll!

Taking on the European luxury brands is always daunting, as Cadillac knows from experience, and the second generation 2008 CTS is the most potent weapon yet in Caddy’s quest for luxury sport sedan stardom.

Underpinning for the new CTS is an upgraded version of GM’s rear drive Sigma platform. It mixes elements of both the first CTS and larger STS to produce a chassis boasting improved stiffness, while maintaining nearly 50/50 weight distribution.

The wheelbase is the same 113.4-inches as before, but track has been widened by two inches which shows in the more muscular styling and stance, while the front end wears a far more expressive grille that favors the Cadillac 16 Concept. 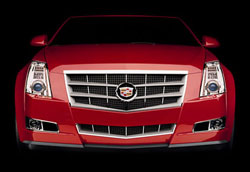 Both sixes pair with 6-speed transmissions; an electronically controlled automatic for most folks, and a real manual for the enthusiasts.

Both rear and all-wheel-drive are available, but most aggressive suspension is rear-drive only.

The softest is designated FE1, which delivers a more traditional Cadillac ride. FE2 is significantly sportier, with the solid ride with comfort that we expect in world class sport sedans.

The most aggressive FE3 setup is the stiffest we’ve ever experienced in a Caddy, and transmits every bump and ripple back to the driver, but also delivers ultra-sharp handing that rivals BMW’s best.

With FE3 CTS is extremely quick reacting into turns. The chassis exhibits virtually no push, and the standard stability control’s competitive setting seamlessly pulls the car back into line after a sloppy corner entry.

Both V6s make their best power high in the rev band, so you do have to keep them spinning for a strong corner exit. Do this and they deliver with plenty of smooth thrust, especially the direct-injection version.

But, out in the real world of irregular pavement, even with self-leveling rear shocks, the FE3 proved to be almost too harsh. So we would opt for the more compliant Bilstein equipped FE2 setup, which still handles very well, but was also a great deal more comfortable. 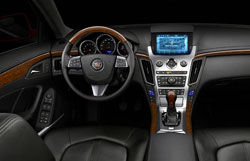 And comfort will always be an important part of the Cadillac equation. But instead of the somewhat sterile, plasticy look of the previous CTS, this 2008 model has a cabin that’s trimmed in tasteful, understated luxury.

Serious analog gauges in close set motorcycle-like pods reside under a low glare-free hood, and the dash has been completely revamped, with a dramatically flared center stack that no longer reminds us of a personal computer tower. Available systems include a pop-up navigation system with an 8-inch screen and 3D imaging, plus audio options that include Bose 5.1 Surround Sound, a 40-gig hard drive that allows you to rewind live radio, and of course, USB and auxiliary ports for your MP3 player.

But despite a feeling of spaciousness, the rear seat ends up with an inch less leg room, but a hair more head room, and the trunk also grows a bit to 13.6 cubic-feet.

Prices have also grown slightly, to a base of $ 32,990 for a manual transmission CTS and $35,290 with the automatic.  Those are very competitive prices to go with a car that is a genuine US-designed competitor for Europe’s most popular luxury sport sedans.

The 2008 Cadillac CTS is the culmination of an immense effort by designers and engineers to build a Cadillac that can share the most demanding roads of the world, while giving rivals a real reason to watch their rear view mirrors.