Owners of full-size utilities who just can’t give up their thirsty behemoths are likely to be first in line for Chevrolet’s new Tahoe Hybrid. With the same size, comfort, and towing ability, but less pain at the pump, the Tahoe Hybrid looks like a great cure for the gas hungry SUV. But, as the saying goes, there’s no free lunch. So, does the Tahoe Hybrid come with a catch?

Hybrids are big these days, and no hybrids are bigger than the 2008 Chevrolet Tahoe Hybrid, and its cousin the GMC Yukon Hybrid.

Aerodynamics play a significant part in the Tahoe hybrid’s fuel economy game plan, so low-drag exterior features include a new front fascia with deeper air dam, and a rear spoiler.

But the real fuel saving magic is GM’s two-mode gasoline-electric hybrid system. It starts with an Atkinson-cycle 6.0-liter V8 engine. Ratings are 332 horsepower and 367 pound-feet of torque. It includes Active Fuel Management which uses only 4 cylinders at highway cruise.

The V8 is joined to GM’s Electrically Variable Transmission, which adds two 60-kilowatt electric motors. Two-Mode refers to the fact these motors can provide continuously variable assistance at both city and highway speeds. The big V8 also shuts down when stopped to save the fuel wasted by idling, and most times we were able to navigate at parking lot pace on electric alone.

The EVT runs in continuous mode under light loads, but can activate its four fixed gear ratios for higher loads.

The two-mode system, which will be available in the Cadillac Escalade in 2009, stores its energy in a 300-volt nickel-metal hydride battery pack under the second row seats.

Regenerative braking is used to recharge the batteries with every stop.

The result of all this technology is Government fuel economy ratings of 21 city/22 highway for 2-wheel-drive models, and 20 city/20 highway with 4-wheel-drive. That’s a 50 percent gain in city economy and a 30 percent boost overall. We averaged 20 in mixed driving on regular gas.

Yet Chevy wants buyers to know that this is a no compromise vehicle, with a maximum towing capacity of 6,200 pounds.

The Hybrid’s extra hardware adds over 300 pounds. But GM took enough weight out of the structure and other components for a near zero weight gain.

Proof of that was a 0-60 time of 8.5 seconds that is the same as the standard Tahoe.

Our crew felt the Tahoe’s throttle response was a little soft at launch, but it quickly picks up the pace with a nice whoosh. High speed shifts are clean and there is plenty of reserve power for passing.

With the Hybrid’s standard StabiliTrak system it proved to also be quite capable in the corners, feeling a bit more planted than the standard model.

The exclusive electrically-assisted power steering is a bit short on feel, but responds quickly.

The hybrid’s four-wheel ABS disc brakes not only regenerate power, they stop the hybrid in 140 feet from 60. While that could be shorter, halts were straight and solid.

Solid also describes its road feel.  The Tahoe Hybrid benefits from retuning of both intake and exhaust, as well as an electric air-conditioning compressor, and low noise fan in the battery pack, to reduce cabin noise. 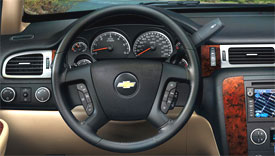 Inside that cabin, the driver can monitor operations with a new hybrid display that’s part of the standard Nav system, along with a new gauge that lets you know when you are driving the vehicle at its most efficient.  Keep the needle pointed straight up and you’re “in the green.”

But here’s the catch. With the Tahoe Hybrid, saving gas cost a lot more cash. The loaded 2-wheel-drive Hybrid carries a base price of $50,490. Our 4-wheel-drive tester goes for $53,295. That’s roughly $6,000 more than a Tahoe LTZ with comparable options.

On the other hand, with gasoline headed to $4 a gallon and $2,200 in government tax credits, the Tahoe Hybrid could pay for off its premium in only a few years.

Using less gas also means that the 2008 Chevrolet Tahoe Hybrid emits less green house gases. So, it is an environmental step in the right direction.

Plus, as more and more thirsty SUVs and pickups adopt full-hybrid systems, a reduction in our dependence on foreign oil could be the real payoff.